Which former Ohio State football player would you want on this year's squad?

This year's OSU squad looks fairly stacked and should be a contender for at least a BCS bowl. But what if we add a Buckeye Legend to the mix? How good could this team be?

Share All sharing options for: Which former Ohio State football player would you want on this year's squad?

This year's Ohio State team should be really good. They have a legitimate Heisman contender at QB, studs along the backfield, at linebacker and in the secondary, experience along the offensive line, and speed at wideout. Just for fun though, let's say we could go back throughout all of Ohio State's rich football history, and just plop a guy from the history books onto this year's team, just like a created player on a video game.

During the span of 1890-2012 the Buckeyes have won seven Heisman Trophies by six players and have the only two time winner in Mr. Archie Griffin. To go along with the seven Heisman Trophies the Buckeyes also have had seventy-eight consensus All-Americans and many different award winners in their storied history. So to pick just one player for this years team was going to be a pretty tough ordeal. Or so I thought...

With the game changing so much and the players getting bigger, stronger and faster it would be hard for me to pick a player like Bill Willis. If you are too young and don't know who Bill Willis is, he was part of the first ever National Championship team the Buckeyes fielded. By his senior season Willis was the anchor of the defensive line weighing in around 205 pounds, but don't let the weight fool you as he was named First Team All-American by United Press International and Look Magazine. But I think it is safe to say Willis would not fare too well against the big hog mollies in today's game.

With Braxton Miller at QB, it probably doesn't make sense to add somebody like Troy Smith to the squad. Even though the Buckeyes have produced several top notch backs in their history, does anybody think that running back depth is an issue for the 2013 squad? If anything, Ohio State could potentially use an elite possession receiver, depth and leadership along the defensive line, or perhaps most of all, another bonecrushing linebacker.

Bonecrushing linebacker eh? I think Ohio State has produced a few of those back in that day. With that, I have decided the player that I would want most on this years Ohio State team would be none other than A.J. Hawk. 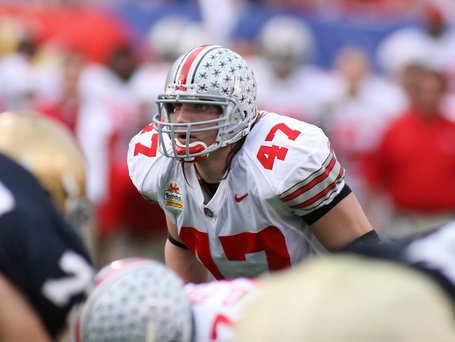 Hawk, who was born in Kettering, Ohio played his prep ball at Centerville High School. During his four years with the Elks, Hawk would go on to put up massive numbers, some of which still stand as records today. Hawk helped guide the Elks to the state playoffs in '98 and '99 before missing the playoffs in his junior and senior season. The records that still stand for Hawk at Centerville are career tackles with 583, single games stops with thirty and the most tackles in a twelve game season with 193. A.J. was voted First Team All-State his sophomore and junior season. Hawk was rated a three star per Rivals coming out of high school and the thirtieth best at the linebacker position, some believe he would have been higher if he did not miss some of his senior season due to a knee injury. A.J. would go on to pick the Buckeyes over the Nittany Lions of Penn State, and for that, we're all grateful.

Enrolling at Ohio State for the 2002 season, Hawk was teamed up with two fellow linebackers that also came from the Buckeye State in Mike D'Andrea and Bobby Carpenter. D'Andrea was a a five star linebacker out of Avon Lake who choose the Buckeyes and seemed to be the prize get for the class. After many injuries Mike only accounted for forty-four tackles while appearing in just thirty games in the Scarlet and Gray. Carpenter who came out of Lancaster High School would go on to have a very solid career for the Buckeyes. He finished his career with 191 tackles and would end up being a first round draft pick to the Dallas Cowboys in the 2006 NFL Draft.

Hawk would start his freshman year behind Senior Cie Grant who might be best known to some for the singing of "Carmen Ohio" in Ohio Stadium on the cold winter day in Columbus. It didn't take long for him to make an impression to the Buckeye faithful, in his second game wearing the Scarlet and Gray, Hawk returned an interception thirty-four yards for a touchdown. He would go on and get his one and only start vs Penn State as a freshman making five stops and intercepting quarterback Zack Mills. Hawk would go on to make twenty-six tackles during his backup role as a freshman and helped the Buckeyes win the BCS National Title over Miami (Fl).

Coming into his sophomore season Hawk took over as a starter with the departure of Cie Grant. Hawk would go on and have a stellar sophomore season earning All-Big Ten selection. He would lead the Buckeyes defense with 106 tackles fifty-two of which were solo. This is the only year Hawk would not beat TTUN, yet they still ended the season with a BCS victory over Kansas State. Hawk was named Defensive MVP of the Fiesta Bowl recording ten tackles in the process.

If Hawk's sophomore season didn't catch every ones attention then his junior season did just that. Coming into the year Hawk was a preseason selection to the All-Big Ten team. Hawk would go on to lead the nation in 2004 with 141 stops. Hawks best game of the season and of his career came against Wisconsin in a losing effort. AJ made 20 stops and was the first Buckeye to accomplish this fete since Chris Spielman made 22 stops against TTUN in 1986. The Buckeyes would go on to beat Oklahoma State in the Alamo Bowl, making many wonder if this would be the last time they would get to watch Hawk in the Scarlet and Gray. A.J. was named an All-American by most everyone to go along with team MVP and All-Big Ten honors.

Hawk and the Buckeyes entered the 2005 season ranked ninth after the 8-4 season. Once again A.J. led the defense with 121 tackles making it his third season in a row to do so. In one of the more hyped games of the season was in week two when the Longhorns of Texas made a trip to Columbus for an early top ten clash. The Longhorns would escape Columbus with a 25-22 victory (if only someone made that catch). Hawk finished the game with twelve tackles, one interception and a fumble recovery. The Buckeyes rebounded nicely after that loss to Texas and finished the regular season winning eight of nine games. After beating TTUN in Ann Arbor, the Buckeyes were off to Tempe for the third time in four season.

The Buckeyes would take on number six Notre Dame and quarterback Brady Quinn. Hawk would go on and have a very good game against his future brother-in-law, winning his second defensive MVP of a Bowl after making 12 stops and two sacks in a 34-20 victory. Hawk was named to the All-Big Ten team to go along with his consensus All-American selection. A.J. took home the Lombardi Award and the Jack Lambert Trophy to go along with being named a finalist for the Bednarik, Butkus and Lott awards. All of those shiny awards, AND perpetual bragging rights at family gatherings? Not a bad haul at all.

The career stats don't lie about Hawk who finished his career with 394 tackles. Hawk was apart of two Big Ten titles, one National Title a perfect 4-0 in bowl games and a not so bad 3-1 record against TTUN in "The Game".

After his legendary career was over in the Scarlet and Gray, the Green Bay Packers would select Hawk with the fifth overall selection in the 2006 NFL Draft. He was the first of five Buckeyes taken in the first round, four other Buckeyes were taken in the draft. Hawk has a very solid pro career so far totaling up 500 tackles 214 assist, thirteen and half sacks and eight interceptions. Hawk won a Super Bowl in 2010 to go along with his one and only Pro Bowl selection.

Hawk's production could never be called into question. He was consistently a tackling machine who found ways to impact the game in multiple levels. Hawk's leadership would also be a major asset with a squad like the 2013 Buckeyes, with a young defensive line and some inconsistent contributors abound. Who would risk missing a tackling lane if they had to deal with Hawk later? Plus, just imagine Hawk lining up next to Ryan Shazier this season. Goose. Bumps.

There are lots of possible answers to this question though, and Hawk is only one. If you had one pick for this year's team, who would it be and why?