Cal's Golden Bears played Ohio State tough last season–what can we expect from them in 2013, with a new coaching staff, several new starters in key positions, and new schemes on both sides of the ball?

Share All sharing options for: Ohio State-Cal 2013: Know Your Enemy

The beginning of the 2013 college football season is just under two months away, and while that still feels like an incredibly long time, our "Know Your Enemy" series can at least provide you with some enjoyable insight to the Buckeyes upcoming schedule to distract you from the horrible, boring offseason. Ohio State will head out to the West Coast for its third game of the year, facing a familiar opponent that gave quite a scare in 2012. We all fondly remember when Cal rolled into Columbus last year and threatened the perfect season. Let's hope this time around is a bit less stressful.

Cal did win only three games in 2012, so don't expect a win in week three to drastically change the "weak schedule" commentary that is all but guaranteed to surround Ohio State early in the season. Cal's definitely not anywhere near the top of any preseason rankings list.

However, the Golden Bears aren't necessarily pushovers, either. They are likely Ohio State's "most talent" non-conference opponent, for what it's worth, and new head coach Sonny Dykes could very well reinvigorate this program. Cal wasn't projected to be particularly tough last season, either, and they gave the Buckeyes a run for their money in 2012. Ohio State beat the Golden Bears, 38-25, but the Buckeyes were helped along by three missed field goals from Cal, as well as a Golden Bears touchdown that was called back on a penalty. It was a game that was too close for comfort, and could have easily gone the other way.

But before that commences, let's find out more about the mighty foe from the Pac-12. We'll start with the logistics.

Q: The Buckeyes play Cal on their home turf this season, so what's their stadium like?

Cal's Memorial Stadium reopened in 2012 after extensive renovations. The original structure was originally opened in 1923, and the name was chosen to honor Californians who served and lost their lives in World War I. The recent renovations maintain much of the look and feel of the original structure, while incorporating many updates. A priority for the renovations was to make the structure seismically safe, because Memorial Stadium sits directly upon the Hayward Fault. The renovated stadium, which has a capacity of 63,186, features a state-of-the-art synthetic turf field. 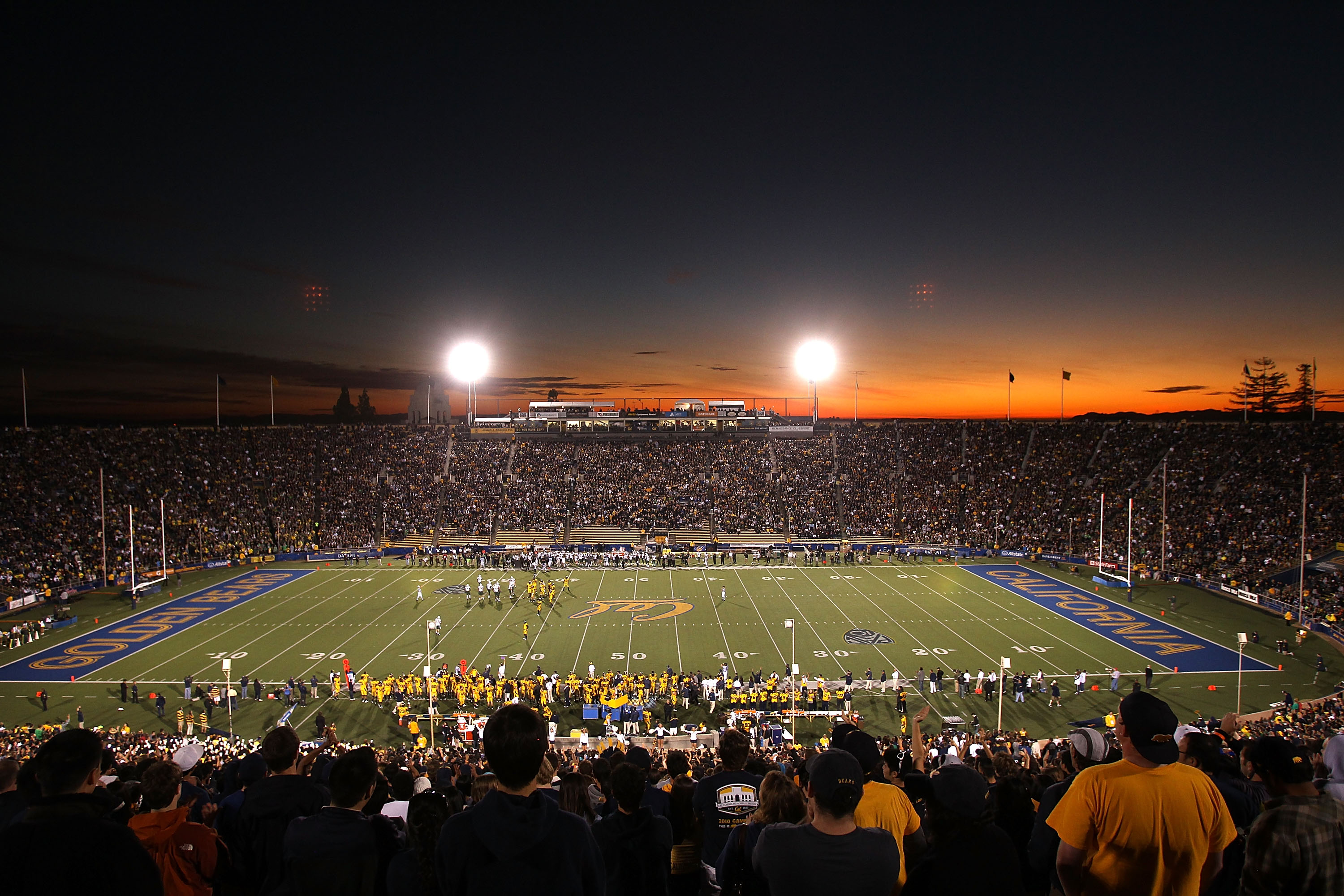 Plans to retrofit and update Memorial Stadium, including the addition of Cal's Student Athlete High Performance Center, were met with much resistance from community members who wanted to preserve a grove of approximately 90 trees at the base of the stadium. There were three lawsuits filed against Cal, and nearly two years of tree "sit-ins" to try to save the trees. They were quite literally "sit-ins," as activists actually sat in trees to keep them from being destroyed.

Leading the charge to save the oak grove was community activist and onetime Berkeley mayoral candidate Zachary RunningWolf, who is, to put it mildly, a colorful character. RunningWolf called the plans for the Student Athlete High Performance Center a "hate crime" against the oak grove, referring to it as "Guantanamo Berkeley." RunningWolf was also convinced that the Illuminati and the Masons were behind the plans that would lead to the destruction of the oak grove.

If the Buckeyes take an early commanding lead over the Golden Bears, Cal fans can take comfort, and find a distraction from the game, in the stunning views from Memorial Stadium. To the east of the stadium, fans will enjoy the spectacular vistas of Strawberry Canyon, and to the west, the San Francisco Bay and the Golden Gate Bridge.

Q: What about interesting game day traditions, or fun facts about Cal?

Buckeye fans who show up in Berkeley this September will hear the Victory Cannon fired at the beginning of the game, and after each score. Assuming that Ohio State comes away with the win, the Cannoneers won't have too many chances to fire the cannon though.

Before each home game, the Cal band, cheerleaders, dance team, their mascot Oski, and fans march to the stadium, and line up along the walkway to greet and encourage the team.

Card stunts, where fans in attendance raise cards in unison according to instructions to make images, are common in Memorial Stadium; as a matter of fact, the University of California invented card stunts in 1910.

The Golden Bears' new head coach, Sonny Dykes, has had a little bit of an adjustment moving from Louisiana to the Bay Area. Dykes, who drives a Cadillac Escalade, hasn't received the warmest welcome–at least not while he's behind the wheel. It turns out that northern Californians aren't huge fans of gas-guzzling SUVs, and they've made their displeasure known to Dykes with rude one-finger salutes.

Another fun fact about Sonny Dykes:

Q: With a new coach, and a lot of turnover in key positions, how much can we expect from Cal's offense in 2013?

It's hard to predict how Cal's offense will perform this season, because with just four starters returning this season, it is a fundamentally different team. Following the Golden Bears 3-9 2012 season, head coach Jeff Tedford was fired, and replaced by Sonny Dykes, who established a very strong program, and a particularly prolific offense, at Louisiana Tech before transitioning to Berkeley.

The other two players involved in the three-way competition for the starting quarterback position are junior Austin Hinder, and freshman Zach Kline. With an inexperienced quarterback under center, Cal's offensive line–missing three starters from last season–will need to protect their quarterback, whoever it may be, to give them an opportunity to implement the kind of fast-paced passing game one would expect from a Sonny Dykes offense.

Cal's run game is a little uncertain at this point as well. Cal's leading rusher in 2012, C.J. Anderson, has moved on, having signed with the Denver Broncos as an undrafted free agent following the 2013 NFL Draft. Ohio State fans certainly remember Golden Bear running back Brendan Bigelow from the contest against Cal in the ‘Shoe last season. Bigelow set a record for the longest run in Ohio Stadium history by an opponent, with an 81 yard touchdown sprint, and finished the day with 160 rushing yards and two touchdowns on four carries. Bigelow's talent is indisputable, but his spring participation has been limited as he is recovering from surgery to repair a torn meniscus. Bigelow probably isn't an every down back, so Cal will need to find another contributor to run between the tackles. If Cal's green (but physically huge) line can open holes for Bigelow to get into space though, he could potentially cause some damage.

Avinash Kunnath of California Golden Blogs spoke with Ryan Gorcey from Scout and Fox Sports about what to expect from the "Bear Raid" receivers this season, and Gorcey indicates that Dykes' offense will feature receivers with varying skill sets, and so far, Bryce Treggs and Kenny Lawler seem to be emerging as potential impact players. Treggs had 216 yards on 21 catches last season, but reports from spring practices suggest that he is rapidly establishing himself as a dynamic #1 receiver. Lawler, a redshirt freshman last season, is reportedly catching everything that is thrown his way.

Q: What about Cal's defense?

When Sonny Dykes took over as Cal's head coach, he brought in Wisconsin linebackers coach Andy Buh as the Golden Bears' new defensive coordinator. Buh was a fundamental part of a Wisconsin defensive unit that finished the season ranked 13th in the nation for total defense last season.

With just five defensive starters returning in 2013, Cal will be inexperienced on that side of the ball, and they are also shifting to a 4-3 scheme from a 3-4. Promising defensive end Chris McCain, a junior and projected starter, has been suspended indefinitely, reportedly for academic issues. Former linebacker Brennan Scarlett is transitioning to the defensive end role, and Cal has a handful of junior college players with the potential to develop into starters. The Golden Bears also lost backup defensive tackle Keni Kaufusi, leaving them thing up front, outside of senior Deandre Coleman at nose tackle.

The Golden Bears have a solid linebacker corps. Strong side linebacker Jalen Jefferson, a junior, looked impressive in Cal's spring game, with six tackles, 1.5 tackles for loss and 1.5 sacks. Penn State transfer Khairi Fortt, a quick, athletic former middle linebacker, looks to be the favorite to start on the weak side after being sidelined with an injury last season. Cal's middle linebacker Nick Forbes was projected by Phil Steele as a preseason All-Pac 12 linebacker choice heading into the 2013 season.

Starting cornerback Stefan McClure is coming off of a knee injury, but on the other side, Kameron Jackson showed great potential last season, including a three-interception game against UCLA.

Q: What are the keys to this game?

Sonny Dykes is thought of as an offensive mastermind, and he coaches his team to play fast, fundamentally sound football. Despite the lack of experience on the offensive side of the ball for Cal, Sonny Dykes' offensive scheme involves just a handful of plays–the base offense consists of about 20 plays, total–so that the offense can execute at a very high rate of speed. Compare that to previous head coach Jeff Tedford's playbook, which featured over 500 different signals, and the transition to a new offense doesn't seem that overwhelming.

Ohio State's defense gave up 512 yards to Cal's offense last season, including that 81-yard record-setting run from Brendan Bigelow, who is assumed to be on track to play at full speed this season. Urban Meyer lamented the bad tackling in that game, as did all of us who were watching. Against a fast-paced offense, the Buckeyes will need to take good angles to the ball, and wrap up when tackling to keep Cal's offense under control.

Ohio State's defense will also need to try to exploit Cal's offensive line and continually pressure the quarterback. Inexperience under center in particular can lead to costly mistakes, and that's something the Buckeyes can work to their advantage. Disrupting the quarterback and not letting the Golden Bears establish a rhythm on offense will help Ohio State control the flow of the game.

Offensively, the Buckeyes will be facing a defensive coordinator who, as a former position coach in Wisconsin, is quite familiar with Ohio State's program, which will help the Golden Bears prepare for Ohio State. That being said, Braxton Miller, who will be more experienced and comfortable in Urban Meyer's offensive scheme, and with myriad offensive weapons at his disposal, will be very difficult for Cal's defense to contain, especially as the Golden Bears will be early into a defensive scheme transition, and may be weaker on the defensive line and secondary.

Cal is, on paper, Ohio State's most challenging non-conference opponent, and it's not easy for teams in the eastern time zone to travel and play on the west coast. And, realistically, the Buckeyes need Cal to be decent, to positively impact Ohio State's strength of schedule in 2013. Hopefully the Golden Bears will succeed during the other 11 weeks of the season, because despite Cal's weapons and home field advantage, their inexperience, particularly at quarterback and along the lines, and Ohio State's speed and improved defense, should make a Golden Bear victory against the Buckeyes pretty unlikely.