After nearly 48 hours of rumors, innuendo, idle speculation, and first- (and second-) hand accounts of varying plausibility, the sad reality of the end of Carlos Hyde's tenure with the Ohio State has come to fruition. Following a reported incident at a downtown Columbus dance club/lounge, the Buckeyes' expected starter (and principal ball carrier outside of Braxton Miller) at halfback is expected to be dismissed from the OSU football team following a team meeting this morning at the Woody Hayes Athletic Center.

Hyde, who had no previous history of suspension or otherwise for disciplinary reasons during his three-plus years in Columbus, had turned down overtures from the National Football League to return to Columbus for his senior season. After rushing for 970 yards and 16 touchdowns a year prior, head coach Urban Meyer had spoken openly this offseason of his desire for Hyde to become the first 1,000-yard back he'd ever coached. Now Ohio State will have to move on to Plan B with just 13 days to go before the team reports for the beginning of OSU's fall camp.

The Buckeyes' tailback's potential legal problems first came to light early Saturday, July 20, when multiple Twitter users, apparently at or communicating with individuals at the downtown Columbus dance club, began reporting that an incident had transpired:

Well Carlos Hyde is about too get arrested

Not even 40 minutes after the reported incident, one Twitter user reported meeting Hyde as well as former Buckeyes basketball starter, J.J. Sullinger, brother of Jared, and later tweeted a picture of himself and Hyde.

The next morning, individuals on the social media network began to question whether or not Hyde was the one as rumored involved in an altercation which would ultimately prove to be career-altering, with Hyde even addressing one directly in a since deleted tweet (preserved below with a retweeted version shortly there after):

Not long after that, Ohio State defensive back (and roommate of Hyde) Adam Griffin took to replying to one of the users from the night in question to defend the Buckeyes' tailback. Sunday evening, Griffin too would delete his correspondence: 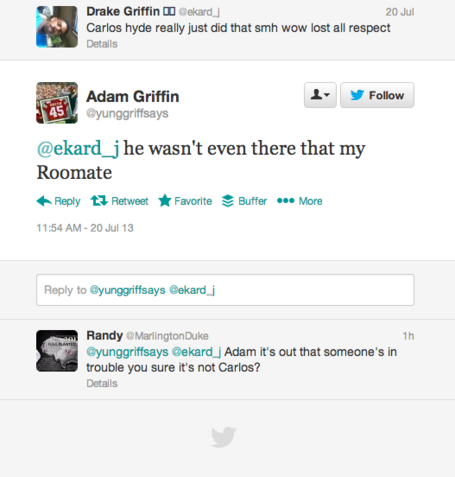 Hyde would later tweet Saturday afternoon, "I can get use to stayin in nd [sic] watching a movie" before also deleting that amongst several others.

He may not be the only Buckeye in hot water, however. The Columbus Dispatch is also reporting that Bradley Roby was arrested in Indiana over the weekend:

According to Monroe County court records, Roby was arrested early yesterday morning in Bloomington and is facing preliminary charges of battery resulting in bodily injury. Sources told The Dispatch he was asked to leave a bar after a disturbance, refused, and was subdued by bouncers at the bar before being taken into custody.

With Hyde potentially out of the picture, Ohio State will now have to turn to a committee of redshirt senior Pivot Jordan Hall, backup tailbacks Rod Smith, Bri'onte Dunn, and Warren Ball, plus incoming freshmen Dontre Wilson and Ezekiel Elliott. The Buckeyes certainly lose that short-yardage weapon they had with the bruising Hyde, and off the field they certainly also won't quell any of the squawk boxing related to Urban Meyer's history with arrests (though it's worth noting he didn't recruit Hyde and took swift action when the situation presented itself).