We continue our Know Your Enemy series with a look at the Northwestern Wildcats, a strong contender following a 10-3 2012 season and the program's first bowl win since 1949.

Share All sharing options for: Ohio State-Northwestern 2013: Know Your Enemy

Are you guys ready for a sentence that you typically don't read on the internet? Nation sick of adorable cat videos, demands hard hitting news. Ready for another one? A road trip to Northwestern might be the hardest game on Ohio State's schedule this year, and the Wildcats are a legitiamte threat to the Buckeye's title chances. With the Wildcats coming off a 10-3 season that included a bowl win over an SEC team, and with a backfield that returns all of their key players, and with more confidence and positive energy than nearly any other team in the league, Northwestern is going to be a serious game this season. It's okay if you need to reread that a few times to get used to it. We'll wait.

When Ohio State travels to Northwestern's Ryan Field in Evanston, Illinois, the nationally televised, primetime game will serve as the Wildcats' Big Ten opener, and also Northwestern's homecoming. Given all the positive energy around the program, the Wildcats will be motivated to show they're ready to take the next step, from being a curiosity, to legitimate Big Ten contender.

It isn't great, if you're a Wildcats fan. In 74 games, Northwestern has walked away with a win against the Buckeyes just 14 times, and just one of those wins came in the last 40 years, back in 2004. As a matter of fact, Northwestern hasn't managed more than ten points in any game against Ohio State since their win in 2004, and hasn't kept the game in single digits since 1994. Overall, in the Big Ten, Northwestern has a winning percentage of .366 over the course of the team's history.

That low winning percentage would suggest that Northwestern has had a historically weak football program, and that isn't inaccurate. (As a point of comparison, Ohio State's win percentage over the program's total history is .701, good for the top spot in the Big Ten.) For many years, Northwestern held the dubious distinction of being the college football program with the most losses in program history. Interestingly enough, that honor was passed to Indiana University when the two teams met during the 2012 season. Going into that matchup, both teams had amassed a total of 632 losses over the course of their respective programs' histories, and when Northwestern beat Indiana, they were able to get out from under the reputation of being the most consistent losers in college football.

Part of the reason Northwestern was able to shake the record for the most all-time losses in program history is that the Wildcats have become a much more consistent program over the years. In the last five seasons, including bowl appearances, the Wildcats' win percentage is .615, and they finished the 2012 season 10-3, including a 34-20 win over Mississippi State in the Gator Bowl, the team's first bowl game win since 1949. The Wildcats enter the 2013 season ranked 22nd in the Coaches Poll.

What can we expect from Northwestern's offense in 2013?

In 2012, Northwestern's offense scored an average of 31.7 points per game, and ranked 42nd in the nation. The offense will retain several key starters, including starting quarterback Kain Colter. Colter has been a media selection for All-Big Ten Honorable Mention for two years running, because, when healthy, he's a versatile player who is able to confound defenses with his arm or his legs. In the 2012 season, Kolter finished with 820 rushing yards and 20 rushing touchdowns, and he completed 68.7% of his passes for 796 yards and eight touchdowns. Colter started 12 of 13 games, playing through a handful of games while injured to some extent, and his average rushing yards per game, 68.8, was good for 12th in the Big Ten. His versatility as an offensive player is such that he's seen time at wide receiver and running back during his Northwestern career. The Wildcats are going to find multiple ways to get Colter the ball this season, which should be a cause for concern among Buckeye fans. He's pretty good.

But the versatile Colter isn't the only quarterback the Buckeyes will have to worry about, as Northwestern backup Trevor Siemian also saw plenty of time under center last season. Siemian threw for 1,312 yards and six touchdowns last season, and neither Siemian nor Colter made many mistakes, combining for seven interceptions total on the season. Siemian is the "passing specialist" of the two, if that makes any sense when talking about quarterbacks, but the Buckeyes will need to find ways to stop both.

Part of the reason the quarterback duo was so successful, however, was Northwestern's cohesive offensive line, and that unit will feature some greener players in 2013 as experienced left guard Brian Murloe (second team All-Big Ten), left tackle Patrick Ward (honorable mention All-Big Ten) and right guard Neal Deiters have all moved on from Northwestern. In 2012, Northwestern's offensive line excelled in run blocking and pass protection, and new faces along the line could be a weakness for the Wildcats. The offensive line is arguably the unit on the field that benefits the most from consistency of personnel, so this creates a potential opportunity for opponents to disrupt the Wildcats' offense.

Northwestern's running game was solid in 2012, and despite a potential shift in run blocking success from the offensive line, should be strong again this season. The Wildcats welcome back 2012 All-Conference honoree Venric Mark, who totaled 1,366 yards and 12 touchdowns last season on 226 carries. Add that to Colter, who is a quarterback that NFL draft analysts are probably drooling over because of his read-option abilities, and you've got pretty impressive rushing potential. As far as Northwestern's receiving corps, senior Rashad Lawrence and juniors Tony Jones and Christian Jones all return, giving the team experience in that role. If the Wildcats can block well enough and stay healthy along the line, Northwestern should have one of the more potent offenses in the Big Ten.

What about Northwestern's defense?

Northwestern's defense returns eight starters on a unit that struggled consistently last season to maintain leads, and their secondary in particular was prone to giving up passing plays late in games to compromise wins. Wildcats safeties in particular struggled in deep coverage, allowing opposing offenses to take advantage of big play potential. . Free safety Ibraheim Campbell, a junior, is back for 2013, but the Wildcats will see a less experienced player in sophomore Traveon Hall, a sophomore, who had some glaring lapses last season, but also some shining moments, and will certainly have matured as a player in 2013. Talented cornerback Nick VanHoose is key to the success of Northwestern's secondary, and he has struggled with injury. All of that said, Northwestern's secondary in 2012 was significantly improved from their 2011 performance, cutting their yards allowed per pass from 8.6. in 2011 to 6.6 last season.

The Wildcats will look to senior defensive end Tyler Scott, All-Big Ten Honorable Mention in 2012, to be the backbone of their pass rush. Scott is a converted linebacker with adequate size and more than adequate speed, which makes him a real threat. Scott finished 2012 with nine sacks and 42 tackles last season, 12.5 of which were tackles for loss. Dean Lowrey will be coming off of the other edge, and he managed 14 tackles and one sack, and led the team in quarterback hurries with six as a backup last season. In the middle, Northwestern's defensive tackles, Sean McEillvy and Will Hampton, are not of prototypical size for the position, but they are aggressive. 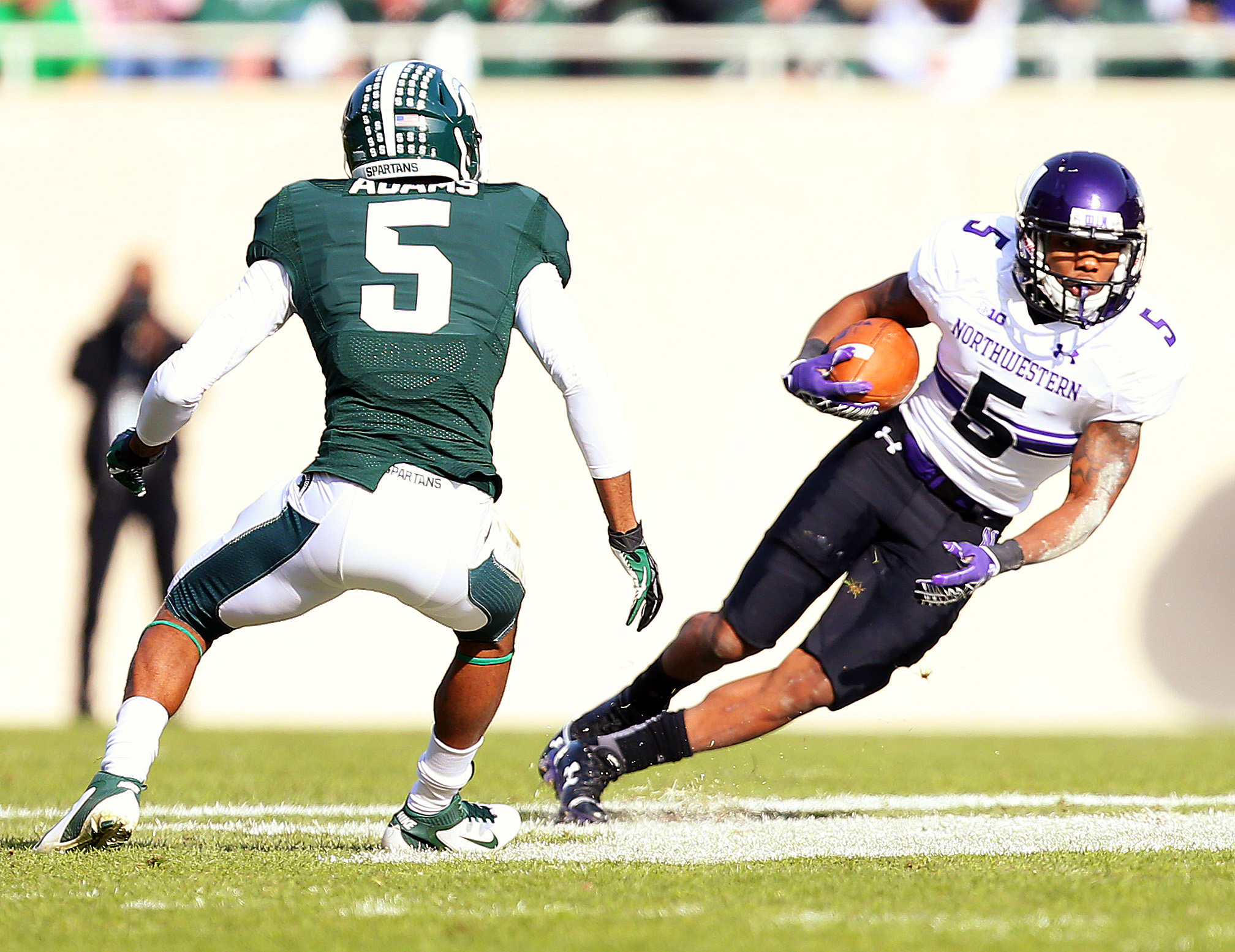 What are the keys to this game?

Northwestern's less-than-illustrious history against the Buckeyes, coupled with the allure of a primetime game on national television in front of an enthusiastic homecoming crowd that will be desperate to outnumber what should be a large Buckeye contingent should result in a supremely motivated Wildcats team. The Buckeyes should also find the Wildcats to be settled in and comfortable, as the matchup with Ohio State will be Northwestern's fourth home game in a row, and the Wildcats should also be well rested, as the Ohio State game comes immediately after a bye week.

On offense, Ohio State has every 2012 starting offensive lineman but right tackle Reid Fragel--now a Cincinnati Bengal -- returning for the 2013 season, so the Buckeyes have the benefit of experience for the bulk of the unit, although Urban Meyer has indicated that offensive line depth is a concern for him heading into the season. Ohio State's offensive line's run blocking should be solid again in 2013, and the "big uglies" can take advantage of an undersized Wildcats' defensive line in the run game. Carlos Hyde should be back for this game, but the Buckeyes do have adequate depth at running back, and Braxton Miller is always a threat in that regard, also.

Considering some of Northwestern's struggles in coverage in 2012, and a couple of less-experienced players in the secondary, Urban Meyer's five-receiver sets could really be an asset in the passing game against the Wildcats. Braxton Miller would do well to throw at any cornerback not named Nick VanHoose, who, despite injuries, is swiftly developing into a true shutdown corner.

On defense, Ohio State should take advantage of the absence of deception involved in Northwestern's two-quarterback approach. Despite Kain Colter's impressive accuracy as a passer, his greatest threat to opposing defenses is absolutely his ability to run. If Trevor Siemian is under center, it's more likely to be a passing play. In addition, the less-experienced players along Northwestern's offensive line provide an opportunity for Ohio State's pass rush to pressure whoever is under center and disrupt the Wildcats' offense. Of course, Ohio State has four new starters along the defensive line for the coming season, but defensive ends Noah Spence and Adolphus Washington, both sophomores, were five-star recruits who both looked unstoppable in Ohio State's spring game.

Red zone defense will be fundamentally important for the Buckeyes, as quarterback Kain Colter and running back Venric Mark both have the potential to do some damage against any defense in the red zone, as evidenced by the 12 rushing touchdowns scored by each player last season. Ohio State's defense allowed opponents to score on 72.2% of their trips to the red zone last season, which was good for second-best in the league behind Penn State. Ten of the 18 touchdowns allowed by Ohio State in the red zone in 2012 were rushing touchdowns.

A key special teams element for the matchup with Northwestern will be punt returns. Punter Brandon Williams has a solid hangtime on his punts, which means that Northwestern's coverage should have the opportunity to be consistent. Effective blocking by Ohio State's punt return unit could make a difference. Ohio State's punt team will need to be mindful of Venric Mark, who, in addition to being a talented running back is also a punt returner with the potential for explosive returns.

What are some fun facts or trivia about Northwestern that I can use to impress my friends during the game?

Ryan Field served as a location for parts of The Express, a 2008 film about Ernie Davis, the Syracuse University running back who was the first African-American to win the Heisman Trophy. Rob Brown starred as Davis in the film, and Dennis Quaid played Syracuse coach Ben Schwartzwalder.

The Chicago Bears played the first game of the 1970 season at Ryan Field, much to the chagrin of Evanston residents, it seems. The NFL forced the Bears to move from Wrigley Field because of inadequate seating capacity, but Evanston residents petitioned city officials to prevent the team from relocating permanently to Ryan Field. The Bears moved to Soldier Field the following season.

So, will Ohio State beat Northwestern?