Who is overrated or underrated in the Big Ten?

Now that football is finally nearly here, now might be a good time to check how some of the major offseason narratives match up with reality.

Share All sharing options for: Who is overrated or underrated in the Big Ten?

Do any of you guys remember Intrade? It was a predictions market, allowing folks to place bets (by buying or selling "futures") on predicting certain events, like where the stock market might be, or who might win certain elections, giving the website a significant boost in popularity around the time of the last presidential election. Being a degenerate politico in addition to being a huge college football fan, my friends would watch the website on a fairly regular basis, and when we felt the market overacted in the aftermath of whatever stupid "gaffe" dominated that newscycle, we'd pop in and short somebody, make a little bit of money, and feel smug.

After the election, it got shut down for breaking all kinds of international laws, but the idea of betting markets is still pretty cool. In the absence of real data, people create narratives to make sense of whats going on, and sometimes, those narratives don't completely jive with the reality. People get their expectations mismatched, and then you have people thinking Romney is going to win Wisconsin, or that USC is the best team in the country. Whoops.

That same phenomenon happens with college football of course. We all have deadlines to hit, even when there isn't any real football going on. Now that we're finally blessed with sweet, sweet football action coming our way in just a few weeks, now might not be a bad time to examine some of the conventional wisdom that's built up regarding Ohio State and the Big Ten over the summer, and see if it's on target, or if we've oversold our case a little.

Northwestern as a legitimate Big Ten threat for *this season*? SHORT

It feels weird to type this, since I did write over 1,000 words not that long ago about how I thought Northwestern might be the hardest game on Ohio State's schedule, or that the program's bout of competitiveness is likely to be the new normal, not an aberration. I still think all of that is true.

But just because I think there are lots of reasons to be bullish about Northwestern's prospects as a *program* doesn't necessarily mean that they are in the thick of a division title race this year. The reasons for being excited aren't hard to find: Northwestern brings back one of the league's best running backs in Venric Mark, an exciting QB platoon that actually works in Kain Colter (who can also carry and catch the ball) and Trevor Siemian, and a defense that should project to be more physical than Wildcat defenses of yore. Given the team's victory of Mississippi State in a bowl game last year, and the relative paucity of other strong Big Ten teams, I don't blame anybody for dusting off a Northwestern flag and waving it high in the sky.

Despite all of those things to love though, I think there are legitimate reasons to pump the brakes a little on the Wildcats. The biggest concern is probably their offensive line, which only returns two players with any career starts, and with a whole lot of sophomores and redshirt freshman below them on the depth chart. It doesn't matter how flashy that backfield is if the Wildcats can't get a consistent push, and they're potentially one or two injuries in that unit away from a big problem. Since Northwestern doesn't really have an explosive receiving corps, they're going to struggle if they regularly get behind schedule on offense. They'll really need that line to play well, and it's unproven.

The other concern is a schedule that isn't *that* easy. Given the fact that this team isn't super deep in the secondary (and may not have a great pass rush outside of Tyler Scott, who is a monster), an opening day road trip to Cal isn't a walk in the park, and the Wildcats travel to Wisconsin, Nebraska, and host Ohio State, Michigan and Michigan State. I'm not sure what level of overwhelming home field advantage the Wildcats can really count on in Evanston, so getting a few of the proverbial big boys at home might not be the advantage that say, Wisconsin gets.

I'm not saying Northwestern can't win the division, or win 9 or 10 games. I do think that doing so would be a big accomplishment though, and winning 7 or 8 isn't out of the question, especially since....

I watched the same Michigan State squad you did last season, which participated in some of the most unwatchable football games of any major college school in the country last year, certainly setting back the national perception of the Big Ten another twenty years. No matter how dominant their defense was, or how good Bell was, the rest of their offense flailed around like a Pop Warner team trying to learn the Triple Option. I know it was ugly, you know it was ugly, that's why they finished 7-6. Before I started to do some homework, I imagined a similar result for this season.

But people a lot smarter than me seem to think differently. The Spartans bring back experience along the offensive line, a very strong secondary paced by Darqueze Dennard, a stellar linebacking corps led by Max Bullough, and the understanding that this year's team can't be as unlucky or as ineffective at passing as last year's team, and it isn't hard to see how the Spartans could show significantly better results. 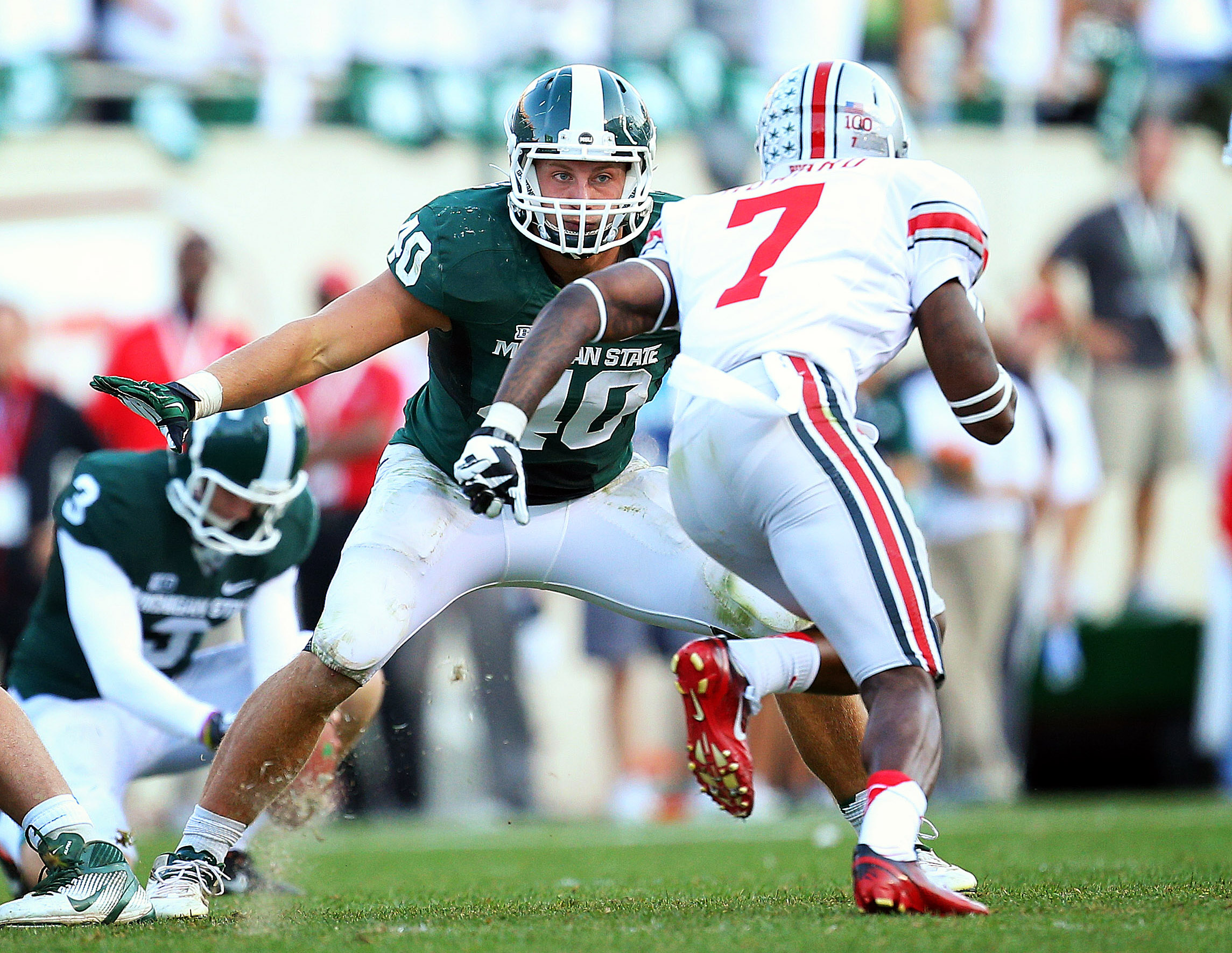 They also have a very manageable schedule. They do travel to Notre Dame, Nebraska and Northwestern, but miss Ohio State, and two of their other B1G road games are against Iowa and Illinois. If they can find a way to beat Michigan at home, a 9 win season isn't out of the question. Michigan State should be just as much in the mix for the Legends division title as Michigan, Nebraska, or Northwestern.

Wisconsin as still being dangerous-as-hell? BUY

It might be tempting to bury the Badgers as a potential Buckeye foe now that Bert has left for the green pastures of Arkansas, and touchdown machine Monte Ball left for the NFL. New coaching hires often mean a period of transition, and there are some on the B1G media footprint that perhaps weren't totally sold on Gary Andersen.

As perhaps one of few Midwest bros who actually watched Utah State last season, allow me to vehemently disagree. I think Gary Andersen is awesome, what he did for the Aggies was nothing short of a Christmas Miracle, and I think there is every reason to think he can be successful at Wisconsin, even if it's harder to imagine a more different city from Logan, Utah than Madison, Wisconsin. Also, the Badgers bring back a totally destructive force in running back duo James White and Melvin Gordon, have one of the best pass catchers in the league in Jared Abbrederis, and should not struggle too badly in changing to a 3-4 defense. The Badgers have an easy B1G schedule too (no Michigan, Michigan State or Nebraska). If they beat the Buckeyes (and they could), it would be hard for Ohio State to make up the ground in the division to still grab a trip to the B1G title game.

The Buckeyes and the Wolverines are going to play twice this season, once at the end of the year, and another for the B1G title. SELL

Many Buckeye fans appear pretty confident about their matchup with Michigan this year, even though the game will be in Ann Arbor, although you probably wouldn't expect anything different. Others outside of Columbus have openly pontificated about how it was possible, nay, probable, that Michigan and Ohio State would match up again for the B1G title, before divisional realignment makes that impossible. Color me skeptical.

Sure, there is a lot to like about Michigan, from Devin Gardner's potential, to the Wolverine's personnel starting to finally match their preferred scheme, to a very strong run-stopping unit from last year. There are a lot of questions though. Even though Hoke has recruited a zillion offensive linemen, will they be able to start integrating their very young talent effectively at that position? Where will their pass catching production come from outside of Jeremy Gallon? How will the loss of Jake Ryan for a huge chunk of the year impact their defense? Who is rushing the passer?

Michigan has the potential to win the division, and even make a BCS bowl, and not having to play Wisconsin will help, but it's hard not to see another loss on this schedule outside of a probable one against Ohio State. Given Nebraska, Michigan State and Northwestern fielding strong squads, and the non-trivial chance of Wisconsin passing Ohio State, I don't think this is a likely occurrence. I'd bet against it.

...And so with that, get ready for the Ohio State vs Michigan rematch, after the Wolverines slip past Northwestern.