We move forward in our world-renowned preview series, as we get to "Know our enemy" for Game #10 - The Illinois Fighting Illini.

Share All sharing options for: Ohio State-Illinois 2013: Know Your Enemy

Here at LGHL, we take pride and pleasure in giving you the best preview possible on every Ohio State opponent, from the dregs of Florida A&M, to the best of the rest of the Big Ten. Every game for Urban Meyer is going to be looked at under the harshest of lights, and strongest of microscopes to see if his Buckeyes pass muster to be named among the nation's elite. If Ohio State wants to play the best in the country in January of next year, they'll have to take care of business on their own schedule to get there.

Enter, in the 10th game of the season, the mighty Fighting Illini of Illinois.

Questions about the Illini abound after last season's 2-10 (0-8 B1G) season. Tim Beckman, he of the Tressel Coaching Tree, almost found himself shuffled loose from Champaign after failing to pickup a single win in his own admittedly weak conference. But Beckman is back with an optimistic outlook for 2014. Any step for this Illinois squad should be a step up, given last year's performance. Emphasis on should.

And now, your questions and answers to help you get to know this year's edition of the Fighting Illini, the 10th "Enemy" of the year for the Buckeyes.

Q: For starters, when is this game?

If I'm a betting man, I would plan for a Noon kick (the Buckeyes' previous four start times: 8pm, 8pm, 3:30pm, 8pm), likely on one of the ESPN family of Networks (probably ESPN2).

Q: November 16th? So you are telling me the Buckeyes have two Bye Weeks in a row?

HA! I bet you're the only one who will make that joke this year! But yes, they will have two Bye Weeks in a row.

Q: Before we get into the #Hot #Preview #Takes, I have to ask...is the Illibuck still a thing?

That's a perfectly fair question. And the answer is...I think it is? Technically, at least according to the Wikipedias, it is still a rivalry between the Illini and Bucks, but with Rutgers and Maryland coming to the Big Ten party in 2014, the teams will be in different divisions, and will not meet every year. So this is probably, technically, the last real year for the Illibuck.  Kinda concerning? 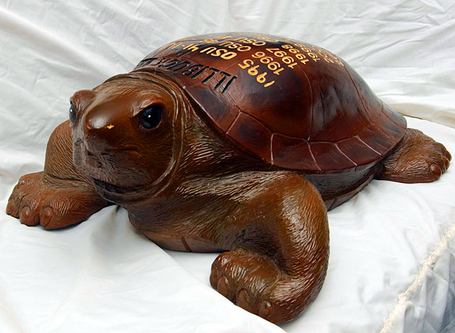 Q: So just how bad were the Illini last year?

Bad. Really bad. Golden Coral Kitchen bad. Even with 24-7 and 44-0 wins over Western Michigan and Charleston Southern, respectively, last year's Illini scored 16.7 PPG, while giving up nearly double that, at 32.1 PPG, losing the other 10 games on their schedule. And giving up only 32 PPG on average feels low when you consider that five different teams put up more than 40 points on the Illini last year:

Q: So what you're saying is that there is no joy in Champaign at all?

I don't want to speak for an entire fanbase but...probably not this year, at least not a lot. And while many will be quick to blame Beckman for this, it isn't like he inherited the 2007 Illinois squad that marched into the Horseshoe and beat eventual National Runners Up Ohio State, en route to a Rose Bowl appearance. But the locals are probably clamoring for the uninspired days of Ron Zook after the awfulness that was 2012.

But crazier things have been known to happen in the Big Ten, and fans in Illinois know it. Since 1997, two teams have reached a bowl game after a 10-loss season, and one of them was that same 2007 Illinois Rose Bowl team.

Q. Fair enough. What should Buckeye fans expect from Illinois in when they meet in November?

The best thing the Illini might have in their back pocket is the fact that they will have had more than just a handful of games to really buy into whatever system Beckman is trying to install after last year. Obviously, year one was a dumpster fire, but there's something special about coaches in their second year that we Buckeye fans know a little bit about. That could play a role in this year's Illibuck game.  Don't get me wrong, this shouldn't be a close game at all, but the opponent will be better than they were last year, you should be able to expect that.

Q: So besides the uncertain hand of Second-Year-Head-Coach fate, what are we looking at in terms of Illinois on offense?

Let's revisit last year shall we? (note: Illinois fans may want to skip the next few paragraphs)

Illinois wasn't as historically bad last year as I've made them out to be, but they were fairly dreadful on offense in almost every way. Their rushing "attack" ranked 99th in the country, and the passing "game" was even worse, at 111th. Add it all together, and you have the 122nd "best" offense in the country. That's fine against Western Michigan and Charleston Southern, but nowhere near enough to hang with almost every other team for more than a half of football (and in some cases, for more than a quarter).

There are plenty of reasons for this, to be sure. Remember, this was the first year under Beckman, who brought a decidely different offensive mindset to a team devoid of any real play-makers on the offensive side of the ball. SB Nation's Bill Connelly tells the true story of what befell quarterback Nathan Scheelhaase:

Sharing a backfield with Mikel Leshoure in 2010, Nathan Scheelhaase rushed for 1,061 pre-sack yards and threw 17 touchdown passes to just eight interceptions. With A.J. Jenkins to help him out in 2011, Scheelhaase completed 63 percent of his passes and rushed for another 896 pre-sack yards...

But in 2012, there were no interesting pieces. There was no explosiveness at running back, nobody to make his job easier (especially on passing downs, where Jenkins thrived) in the receiving corps. Accordingly, Scheelhaase was just awful. He completed 61 percent of his passes, which seems reasonably healthy until you realize that he was averaging just 9.1 yards per completion, still taking a ton of sacks, and throwing twice as many picks as touchdowns. And his non-sack rushing yards were cut in half.

Q: So should the Ohio State defense be worried about anyone in particular when the Illini have the ball?

Scheelhaase can dangerous, even without weapons. It is his last year in Champaign, and the former four-star recruit will probably want to go out with more than a whimper. He did throw for 1,361 yards last year, but only had four TDs to eight INTs, and took 22 sacks. But Scheelhaase is also a threat on the ground, looking to add to his 461 yards and four scores rushing last year. This assumes, of course, that he even keeps the job he split time in with junior QB Reilly O'Toole at times last season.

Beyond that, it's a bit of a guessing game for the specialists. Donovonn Young is the starter at RB, coming off of a 571 yard season last year. Meanwhile, senior wideout Ryan Lankford will be Scheelhaase's go to through the air. The biggest issue is that, despite the age of the key players (Scheelhaase and Lankford are seniors, Young is a junior), none of them really stood out last year on what was just a bad football team.  They'll have to shine early and often this year to keep the Illini above water.

Keep in mind, however, that there is one big wrinkle that Beckman has added to the offense: installing former Western Michigan head coach Bill Cubit as offensive coordinator. Cutbit, a fan of the spread at Stanford, Rutgers and Missouri, where he was previously offensive coordinator, will be a breath of fresh air compared to how the offense operated last year, and might be just the shot in the arm the Illini need when they have the ball...if they can buy into Cubit's gameplan early.

Q: Who is going to try and stop Braxton Miller and Co. when the Buckeyes have the ball?

That, surprisingly, is a more pressing question for the Illini this year. In a conference where the best teams reload talent, Illinois is clearly in complete rebuilding mode. The front three that was decent in 2011 and slipped down in 2012 (see chart above) is completely new and greener than the turf at Memorial Stadium. Only one player has at least five career TFLs (Tim Kynard) and no other D-lineman had 13.0 tackles last year. Ohio State will be running a lot this year, and unless the likes of Kynard, Houston Bates and Austin Teitsma grow up fast, they will more than have their work cut out for them.

But that's not all! Do you remember Illinois's secondary last year? Cherish the thought, because it's all a memory this year. Only junior strong safety Earnest Thomas returns to the secondary with more than 15 tackles last year. Thomas will be joined by a pair of sophomores (Eaton Spence, V'Angelo Bentley) with some experience last year and...that's it. Everyone else in the defensive backfield is new, including Hilliard Darby product Caleb Day, who went to Illinois, even with an offer on the table from Meyer and Ohio State.

Q: So let's get down to brass tacks - does Illinois have a shot against the Buckeyes?

No, they don't have a shot. There is too much missing from a team that wasn't any good last year, and not enough talent to compete with what Urban Meyer is bringing into Memorial Stadium in November. Tim Beckman probably isn't the answer most fans were looking for, and former Oklahoma State QB Wes Lunt, who will fit perfectly into Cubit's system, isn't eligible to play until next year because of NCAA transfer rules. But...anything will be a step up, and despite getting trounced in Columbus last year, the Illini should be a better squad by November, and will probably play the Buckeyes close for a quarter or two.

On the other hand:

Yes, they do have a shot. If...Miller isn't all we know he's cracked up to be, and the running game can't get it going.  The green Illini defense finds a way to create turnovers and field position for Scheelhaase and company on offense. The Buckeye freshman we've been hearing about all summer in Columbus aren't ready for prime time, and the Buckeye defense shoots itselt in the foot, much like the 2007 Buckeye defense did against Juice Williams in the Horseshoe. If Illinois can cause mistakes and capitalize on every single one of them, then yes, they certainly have a shot.

Q: So is Illinois going to win the game?