One week before'The Game, will the Buckeyes be able to save their energy for That Team Up North, or will the Hoosiers step up and treat them to a good, old-fashioned shootout?

Share All sharing options for: Ohio State-Indiana 2013: Know Your Enemy

With the 2013 college football season just over a week away, our "Know Your Enemy" season preview series should provide you with everything you need to know to impress your friends about each and every one of Ohio State’s opponents this season.

The Buckeyes welcome the Indiana Hoosiers to Ohio Stadium for the final home game of the season and the final game in the Horseshoe for 16 seniors.  We all remember the late scare that the Hoosiers put into the Buckeyes last season, a 52-49 Ohio State win in Bloomington, so let’s hope the talent differential is a little more self evident this go around.

The matchup is set for November 23rd, but the network and time have yet to be determined.  As has been the case in recent years, I would expect the game to be picked up by the Big Ten Network.  Also, since the game is in November, a seemingly unwritten Big Ten rule stipulates that it cannot be played at night, therefore, it is likely that this will be one of the few noon games on the Buckeyes slate.  Let me be the first of many college aged folks to say that I HATE noon games.

Are the Buckeyes playing the Indiana Hoosiers or the Oklahoma Sooners?

Prior to the 2011 season, Indiana hired Oklahoma assistant coach Kevin Wilson to become the school’s 29th head coach.  During his tenure as the Sooners’ offensive coordinator, Wilson won the Broyles Award, which is given to the nation’s top assistant coach, and coached a Heisman Trophy winner.

In his first season as head coach, Wilson made the Hoosiers look exactly like his former school: crimson helmet with the interlocking school logo, bland jerseys with the school nickname across the chest, and double striped white pants.  I think that Wilson hoped that dressing his team like the powerhouse he left in Norman would strike fear into opponents.  However, I think he forgot that players like Sam Bradford and Adrian Peterson were the ones wearing those jerseys…

Hey Hoosiers, we'll be thinking about you a lot this weekend! Wait. wait, what's a Hoosier, again? http://t.co/sD8C4pO8 #GoBucks

Were the Hoosiers any good last season?

Indiana put a lot of points on the board, but gave up even more.  The Hoosiers failed to make a bowl game for the fifth straight season, but were competitive in almost every game.  Four of those losses came with a total differential of 10 points.  The bounce of the ball this way, a bounce that way, and 4-8 could have easily been 6-6.

When was the last time Indiana was relevant?

The Hoosiers were one of the first Big Ten programs to feature a spread offense, with rival Purdue being the other team to lay claim to this title.  In the late 1990’s, the Hoosiers were led by the explosive Antwaan Randle El, who became the first player in NCAA history to pass for and run for 40 career touchdowns.  Indiana was only 16-26 under Randle El’s leadership, but the electric quarterback brought video game excitement to each game.

How can Indiana be, say, less boring?

During the Randle El years (1998-2001), the Hoosiers uniforms prominently featured black, which was quite a change from the historic, and somewhat boring, Cream and Crimson.  Adding a color that isn’t yours to make your uniforms attractive to recruits? Maybe Oregon is the Indiana of the west!

Besides those years, Indiana has stuck to a more traditional look, donning a block "I" or interlocking "IU" on a crimson helmet.  However, if going to school in the middle of Indiana wasn’t attractive enough to recruits, the Hoosiers unveiled four new helmet designs for the upcoming season. 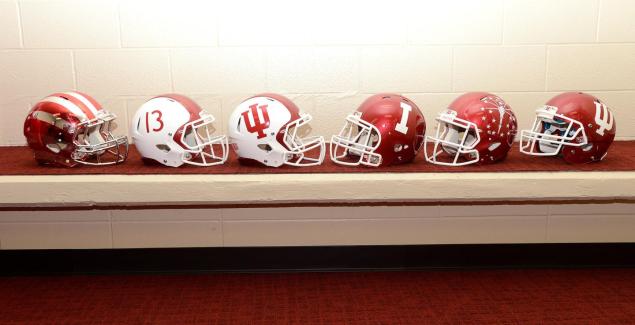 Along with the traditional block "I" and interlocking "IU" helmets, Indiana added a couple two-toned helmets (which only look good on a Riddell Revolution Speed Helmet because it follows the ridges of the helmet), a helmet featuring a design from the Indiana state flag, as well as a chrome, candy cane helmet.  The candy cane helmet is a nod to the Hoosiers basketball program, which wears Cream and Crimson striped warmup pants.

With 21 returning starters, Indiana is one of the more experienced teams in the Big Ten.  Featuring an uptempo offense, which Wilson was best known for using with Sam Bradford at Oklahoma, the Hoosiers ranked second in the Big Ten in yards per game and scored over 30 points per game.

With the return of sophomore quarterback Tre Roberson, who missed most of last season with a broken leg, the Hoosier offense is expected to reach another level.  Many Indiana fans compare Roberson's skill set to former quarterback Kellen Lewis, but also hope that the comparisons end there.  If Roberson comes back rusty, the team is still in capable hands with junior Cam Coffman, who took the majority of the snaps after Roberson went down with his injury.

The Hoosiers have the benefit of an eight game home schedule this season, something that happens every other year at Ohio State.  Although Memorial Stadium doesn’t feature that much of a home field advantage, playing games against teams like Navy and Bowling Green at The Rock make the game much more winnable than on the road.

With visits from a FCS school, Indiana State, and the aforementioned Midshipmen and Falcons, the Hoosiers look to be undefeated heading into a big matchup with Missouri. Even if they cannot knock off the SEC underachiever, the Hoosiers will be halfway to a bowl bid before they even hit the Big Ten part of the schedule.

The Big Ten slate features tough games at home against Penn State and on the road against Michigan, Michigan State, Ohio State, and Wisconsin.  I’m not sure the Buckeyes would make it through a comparable gauntlet unscathed.

With Big Ten cellar-dwellers Illinois and Minnesota on the schedule, the hopes of 6-6 or disappointment of 5-7 could rest on the result of the Old Oaken Bucket Game against rival Purdue.  I hope the Hoosiers are hungry because the Buffalo Wild Wings Bowl or the Little Caesars Pizza Bowl is the likely destination.

But what about the game. Will Ohio State win?