Ohio State's second fall camp under Urban Meyer is here. What should we expect these next 3-4 weeks?

Share All sharing options for: Ohio State fall camp 2013: What to look for

Ohio State's second "Camp Meyer" kicks off this morning with the freshmen practicing this a.m. and the entirety of the team working out sans pads at the Woody Hayes Athletic Center this afternoon.

With the players all checked in, the time to put in the work that will make or break a season with extremely lofty designs begins now. Or to be fair, it actually began seven months ago under the tutelage of acclaimed Ohio State strength and conditioning coach Mickey Marotti. Both OSU's early enrollees (corners Eli Apple and Cam Burrows, defensive linemen Tyquan Lewis and Tracy Sprinkle, and quarterback J.T. Barrett) and returning upperclassmen went through the ringer conditioning wise, but their bodies (and minds for that matter) are now all the better for it.

But in many ways, the road to the Buffalo game is just beginning. After today's sessions, the team will continue to practice until Friday, when they'll make the transition to pads (and from the WHAC to their Ackerman Road outdoor practice fields) and continue through August 17th before moving back indoors. The team will soldier on through two-a-days August 9th, 12th, 14th, and 16th. All leading up to game week, August 26th.

With the players and coaches alike feeling good about their chances (keeping in mind there's essentially a month of game conditioning, knowledge transfer, game plan implementation, and team growth in front of them before they can finally showcase what the early stages of the on-the-field product looks like), we begin with a few themes to keep an eye on throughout the scattered reports during the next four weeks.

As mentioned, the Buckeyes lay claim to one of the sport's best strength and conditioning coaches. The toll on the players themselves is almost always apparent on social media. During a brief reprieve this past spring, freshman corner Eli Apple's mom talked about the notable physical transformation she'd seen in just two months' time:

"@itz_mizdee: @SurvivinAmerica Eli's getting some muscle huh!?" Well he always had muscles but now his muscles have muscles.#MarottiProblems

Apple himself after the summer session seemed more than thrilled to get back home, not just to see his friends, but just to spare his exhausted body if but for a week:

Beyond just word of mouth though, the actual results amongst the players have been impressive to say the least.

Former 5-star LB Curtis Grant, who's expected to culminate a renaissance by seizing the vacant starting middle linebacker job following a great spring: And sophomore Camren Williams, largely expected to compete with Grant but ultimately be the top backup at linebacker:

The work in the weight room certainly doesn't stop wholesale as of today either; the team will continue to grow, in some cases literally, with Marotti and OSU dietician Sarah Wick. Each additional session under Marotti and his staff for the players will just make them that much more equipped to take on some of the nation's best come January.

It seems like hyperbole to say, but given the clip at which Urban Meyer and his crack staff recruit at (and what his group actually looks like on paper), there aren't near the sheer numbers of developmental projects and system fit guys we'd collectively grown accustomed to with inbound Jim Tressel classes.

Whether you're talking about linebacker Mike Mitchell, safety Vonn Bell, cornerback Eli Apple, any number of defensive linemen (hello, Joey Bosa), or a cadre of weapons on offense (Dontre Wilson, Jalin Marshall, Ezekiel Elliott, et al), the number of players who are able to step in and play on day one is staggering. Meyer himself said on Colin Cowherd's "The Herd" this past week that they had five offensive freshmen in the mold of Alabama players and that not only were they going to play this fall, they "had to".

Essentially everyone asked has glowed about Wilson, as well, indicating that the one time Oregon commit (and a natural fit into Chip Kelly's offensive scheme) was going to be a natural in an offense that can make use of every potential home run hitter it can get.

And the black stripes are back for another season. Will the early enrollees like Apple & co. have the leg up on being the first to have theirs off? Will someone monopolizing the early praise like Wilson get the honors? Or will a dark horse such as Billy Price emerge?

We've browbeat home how the Buckeyes will go about filling in for their starting tailback while he serves a three-game suspension, but truth be told, though San Diego State will be no joke and Cal could prove to be a plucky road foe, the extra repetitions and snaps for some of the guys previously mentioned (Wilson, Elliott) could prove invaluable.

With Jordan Hall potentially moving away from the Pivot role he was expected to primarily occupy for a short period of time, giving him some progressions at a slightly different position (appropriately enough, his old one under the previous regime) can only help the Buckeyes' versatility when they return to full strength.

The Buckeyes' overall depth at tailback even excluding the fresh faces is already strong. Rod Smith has been considered one of the more talented (perhaps even to an extent, underachieving) faces in the backfield since he first stepped on campus. If his turnover problems continue to be a thing of the past, his hands out of the backfield plus solid mix of attributes should make him a fitting interim heir to Hyde's top billing.

Bri'onte Dunn was just a hair behind Smith much of last fall seemingly, and we never really even got a taste of what Warren Ball, who was sidelined with injuries, could do. Ball drew high praise for what he showcased this spring and could be a pleasant surprise while there are more touches to go around than there will be later on in the season.

The continued evolution of Braxton Miller

For all the questions on defense (and with the Buckeyes' number of new faces, there are plenty), the cliche take away to watch most is the continued progression of Braxton Miller. Though Miller was never quite the same after a brutal hit in the Purdue game sent him to Ohio State Medical Center, his body of work for the season was still impressive enough to have him just on the outside looking in of the Heisman finalists.

Of course that didn't stop both Tom Herman and Urban Meyer alike to say that Miller had a long way to go yet (as good coaches tend to do), but they weren't wrong. Miller himself admitted at Big Ten Media Days last week that he only recently finally had a comprehensive command of what all was going on in the offense. The more comfortable he gets making an extra read or two, the more times he has a better sense for when strategically ducking and running is the way to go instead of doing it out of hearing footsteps, the better the Buckeyes' offense as a whole will be.

Miller will also need to be smarter about sustaining himself. Though his same willingness to do absolutely whatever it took to help the team would sometimes allow for GIF-able highlight plays others only dream about, it also proved his kryptonite, as more often than not Miller would miss time after being dinged up and as mentioned late in the season, looked like a battered shell of his most optimal self. If Miller throws the ball away or slides just 25% more than he did last season, the odds of the Ohio State coaching staff needing to rely on Kenny Guiton's senior savvy decrease exponentially, and while Guiton's more than a proven commodity spot "starter" at this point, Miller is still the straw that stirs the Buckeyes' offense's drink. 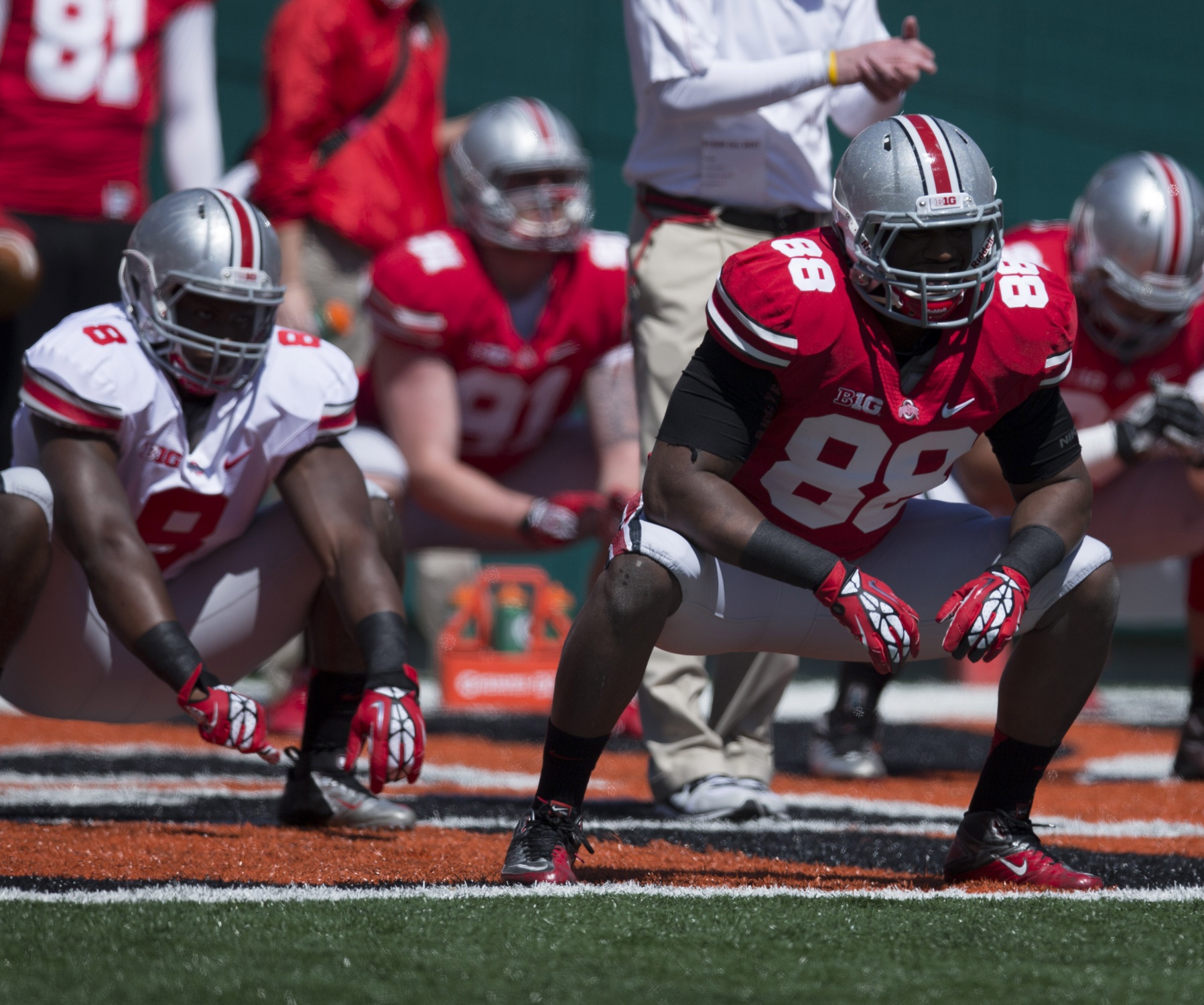 Ryan Shazier, along with the Ohio State secondary, aren't going to be issues for Luke Fickell and the Ohio State defense. Conventional wisdom (and preview magazine types) would have you believe that just about every other starting position on the Bucks' D will be, but given some of the personnel filling those voids, that's far less likely than outsiders would like to think. Noah Spence and Adolphus Washington are as good as any of the Carlos Dunlaps and Derrick Harveys Meyer ever had at Florida. Michael Bennett's intelligence and versatility combination on the line is also unrivaled throughout much of college football, and the sheer depth (empowered by the last two recruiting cycles) on the defensive line in general elevates it above just about all Ohio State defenses post the 2002 championship team.

Linebacker of course is still a venerable wildcard, but if Curtis Grant is even 80% of what folks thought he could be coming into his Ohio State career, whether the other linebacker is Josh Perry or a newcomer, the team should be fine. Now of course if Bradley Roby winds up missing some serious time, the lack of experienced depth at corner could prove far more troubling than any Hyde-related absenteeism. Working under the pretense Roby faces a zero-to-two game suspension though, and Adam Griffin/Armani Reeves should suffice just fine.

Remember, even if you wanted to forget it, you're going to have it hammered into your subconscious during the next three-to-four months that Urban Meyer is 34-4 during his second years with the various programs he's coached. His first national title came during his second year at the University of Florida. His first at Ohio State could come under similar circumstances, but focusing on his first consecutive season openers winning streak as a Buckeye is all he (and any right-minded individual) should focus on in the interim.