The Buckeyes squeaked out a victory vs. Cal last year but the Golden Bears will be looking much different with Sonny Dykes calling the shots.

California Golden Bear's Head Coach Sonny Dykes has lit up the scoreboard wherever he has coached using the Air Raid offense. His offenses at Texas Tech, University of Arizona and more recently Louisiana Tech all destroyed their school record books for total offense and points while the individual players also smashed their school's individual records.

When one thinks of the Air Raid offense, an offense that puts up whopping numbers (51.5 ppg at LA Tech), they must think, "Wow, I bet the playbook is so complex with 100's of plays!" But in reality, it is quite the opposite. Leach's disciples are known to implement their offense in only three days. The installing of Dykes' playbook at Cal was talked about in a Sports Illustrated article, "The base offense consists of roughly 20 plays -- three screens, six runs and 12 or so pass plays -- that can be packaged together. By comparison, Cal's offense under Jeff Tedford contained more than 500 different signals." Dykes' cares more about perfecting a limited number of plays rather than implementing a huge playbook that cannot be perfected.

The Golden Bears play fast and with true freshman quarterback Jared Goff under center, Sonny Dykes has done everything but taken his foot off the gas in terms of the number of plays ran in the first two games. The Bears lead the NCAA with an astounding 103 plays per game average, up from last years average of 71.5 plays per game. In Dykes' debut versus Northwestern, the Wildcats were accused of faking injuries once the Bears got into rhythm to slow down the high tempo "Bear Raid" offense. Goff was an impressive 39/64 passing for 450 yards and two touchdowns, but threw three interceptions, two of which were returned for costly touchdowns in a 14 point loss.

The Air Raid typically has "package plays," where they can run or pass using the same formation and blocking scheme by the offensive line. In Dykes' system, he has the offensive line about a yard behind the center, in two point stances, looking like they are about to pass block. Most of the time, even with the linemen in a pass block stance, the line will run block and the quarterback will have the option to throw the ball to his receivers who are running routes or hand the ball off to the running back.

In non package plays where there is either no running back next to the quarterback or the running back is running a pass route, the linemen will still be a yard behind the center except they will step another yard back and sit when the ball is hiked. 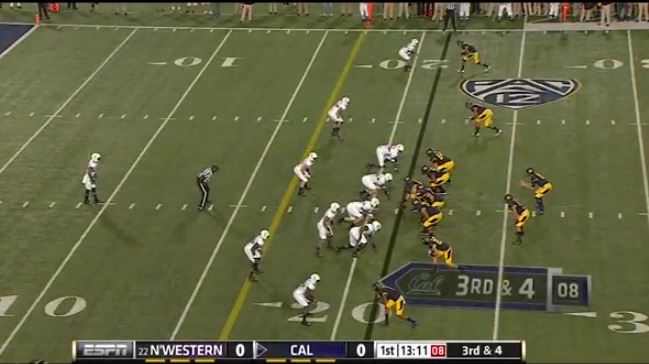 Notice the entire offensive line in a 2-point stance, a full yard behind the line of scrimmage. 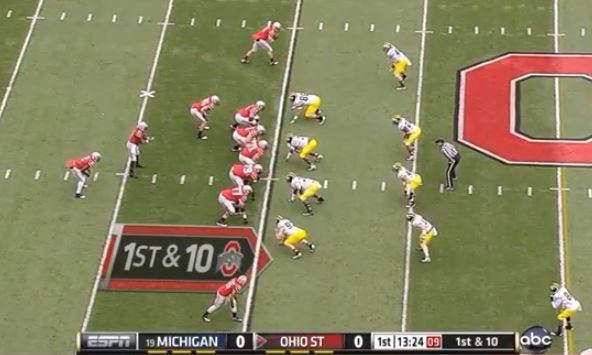 Now, the Buckeye offensive line are all in three point stances, on the line of scrimmage. 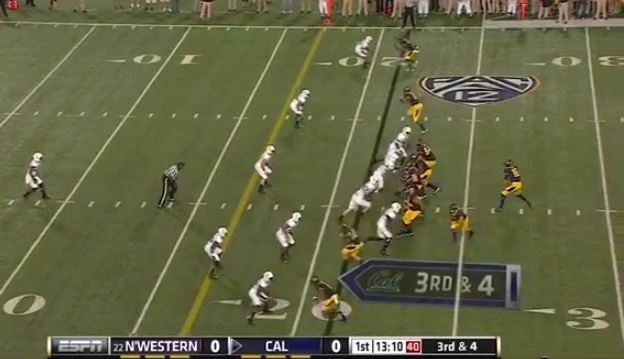 On the snap, the Bears offensive line simultaneously drops back another yard and neither of them have made contact with a defensive lineman within the first two yards. 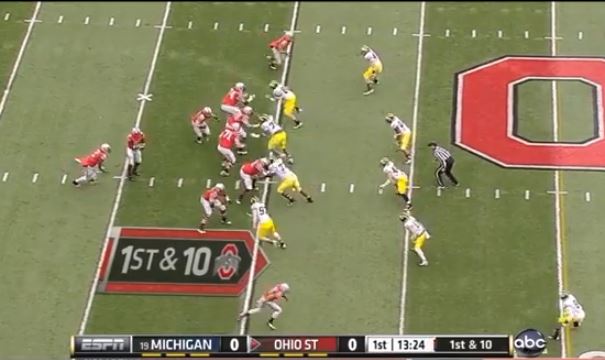 Quite the difference, huh? The guards are engaged on the line of scrimmage and the tackles shuffle to get an angle on the defense ends, rather than taking a full step backwards.

Cal's quarterback, Goff, is typically going to look to throw the ball within 1-3 seconds, so the odd blocking scheme may not make a difference all of the time. To counter the quick pass plays, expect the Buckeyes to press the receivers on the outside, forcing Goff to hold onto the ball for another second or two.With the offensive linemen already two yards in the backfield, the pocket can collapse pretty quickly, forcing a hurried pass or a sack.