After giving an introduction to Sonny Dykes' offense, here is a look at some of their common route combinations and formations. 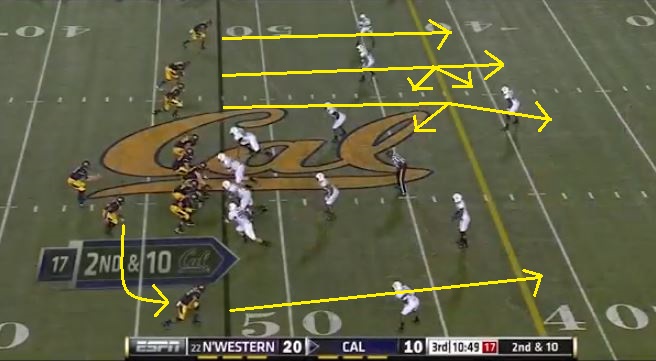 Sonny Dykes' four verticals play stems from his days as offensive coordinator under Mike Leach at Texas Tech. The Golden Bears want to lull the defense to sleep by throwing quick passes and running out of this four receiver set, then take a shot deep depending on the coverage. 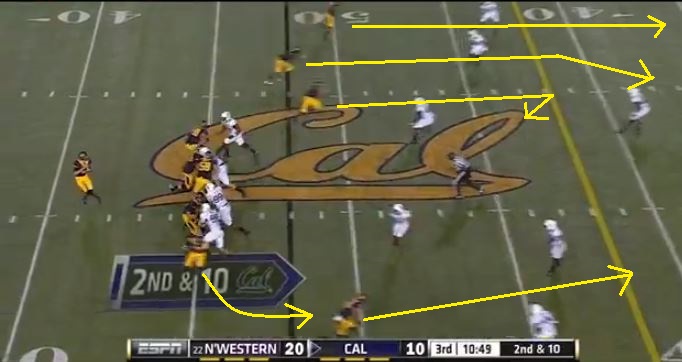 The backside vertical receiver at the bottom of the screen gets inside leverage on the cornerback and Goff makes a great throw over the top, for the touchdown. 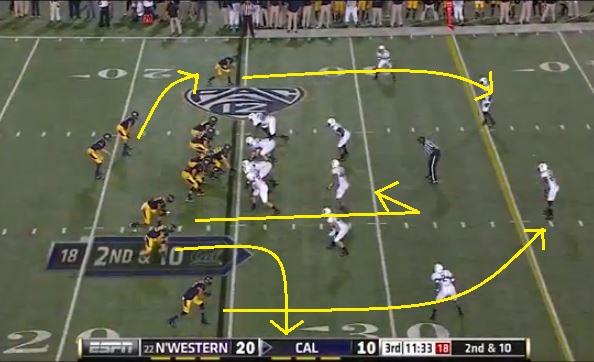 Depending on the pass coverage, Goff can read and make an easy throw to any of his receivers. The Golden Bears have trips to the right with the X receiver and the running back to the left of the quarterback. The outside receivers are clearing out the defense, running post patterns. The inside receivers (outside slot at the bottom and the running back) are running to the flats and the inside slot receiver is going to run a stick route to a hole in the coverage. 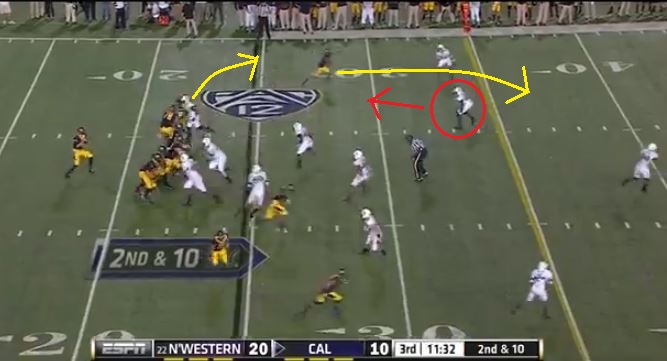 Northwestern's defense drops back into what looks like a cover 3, and Goff gets rid of the ball quickly to running back Brendan Bigelow (Buckeye fans should remember him from last year) who has a chance to beat the strong safety in space. Don't forget this was Goff's first start, in the future he may look the strong safety off and hit the post pattern before the free safety gets there, resulting in a huge gain. 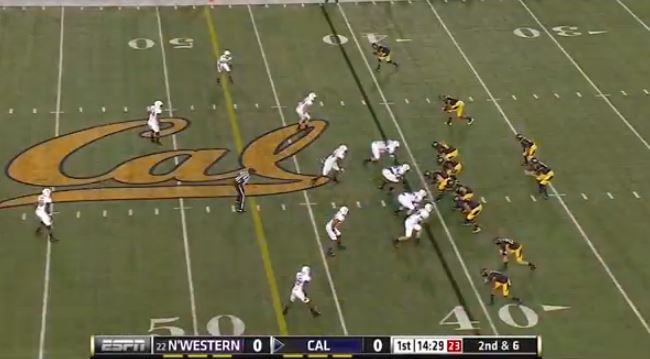 In the Air Raid offense, there are certain plays that are known as package plays. The quarterback reads the defense and can run or pass based on the defense's coverage or alignment. 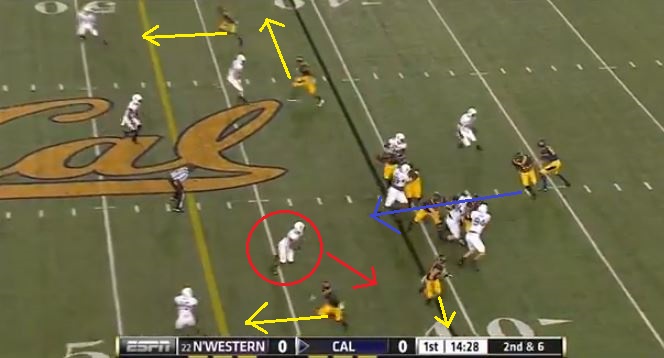 Goff hands the ball off to Bigelow and the linebacker that is circled should be filling the gap to stop the run at the line of scrimmage. He follows the slot receiver who is running a quick out to the flats, creating a huge hole for Bigelow and allows him to gain big yardage. 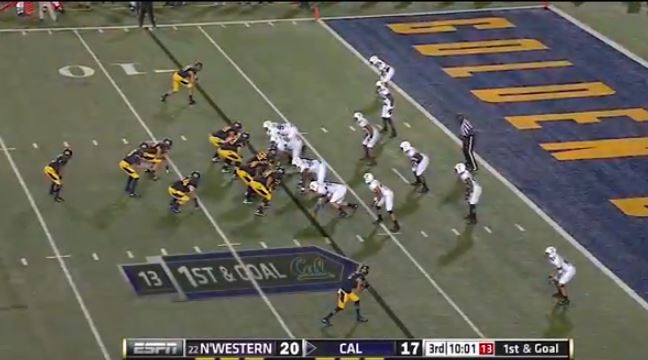 Here is an example of the diamond formation, a variance of the pistol offense that has recently gained popularity by the San Francisco 49ers. Dykes tends to run this formation around the goal line and his Louisiana Tech team actually ran and passed out of the formation last season versus Texas A&M resulting in three touchdowns.

The diamond formation is basically a power running formation for the pistol offense that can open up 1 v 1 match-ups on the outside. Here, Goff sucked the defense in with a good play action fake and threw a fade to his receiver who out- jumped the cornerback in single coverage, resulting in a touchdown.

After seeing how the Cal Golden Bears pass block, along with their different route combinations and formations, it will be a good test for the Ohio State defense. The defensive line will get a chance to collapse the pocket, forcing the freshman quarterback into making some mistakes. I wouldn't be surprised to see a couple of inside blitzes by the linebackers to fill the open gaps that the offensive line creates when they drop backwards. Most importantly, I expect Coach Fickell to have his cornerbacks press the quick Cal receivers at the line and be physical, throwing off the timing between Goff and his receivers. This is not the time to give a five yard cushion off the line and let the young quarterback gain confidence and a rhythm. This is where Coach Fickell must use Bradley Roby's physicality to confuse the young quarterback and make him hold onto the ball longer than three seconds. That will also take away the bubble screen and quick screen game that Dykes' loved to use at Arizona and Louisiana Tech.

If Cal begins to gain consistent yardage, expect Coach Fickell to dial up a fire zone blitz, which rushes five and drops three underneath defenders and three deep defenders in zone coverage. It will be interesting to see how Coach Fickell begins the game on defense and make adjustments as the game goes on.

After the conclusion of this game, we should have a good idea as to where the Buckeyes are defensively, going into the Big Ten schedule.