Corey Brown and Dontre Wilson have lined up all over the field for the Buckeyes, see how Coach Meyer has used them so far.

Philly Brown is the jack-of-all-trades in Coach Urban Meyer and Tom Herman's offense. He can line up as the Z receiver, line up in the slot, sub out Evan Spencer at the X and takes punt returns. Brown has played in 175 of the 228 snaps that the Ohio State offense has ran in three games. In those three games, Brown has 13 receptions for 133 yards and three touchdowns. Including punt returns and rushing yardage, Brown is averaging roughly 74 yards per game and 10 yards every time he touches the ball.

These are how Brown's 175 snaps break down and how the coaching staff has used him all over the field to gain mismatches:

1. Here, Brown is lined up in the inside slot position with a safety on him, this is what we call a mismatch. 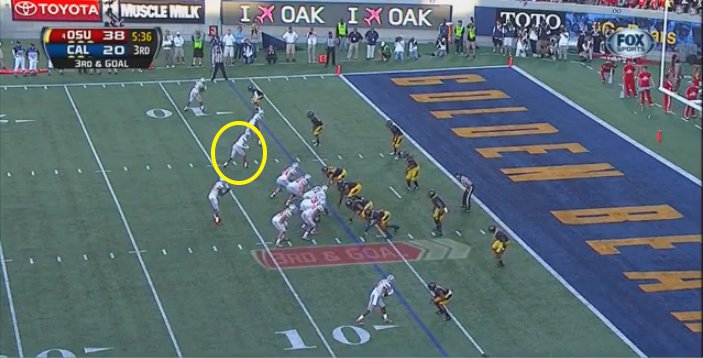 2. On this play, Brown lines up on the outside against Cover 1 Press. He uses his quickness to get a clean release on the cornerback and his straight line speed to gain separation for the great touchdown catch. 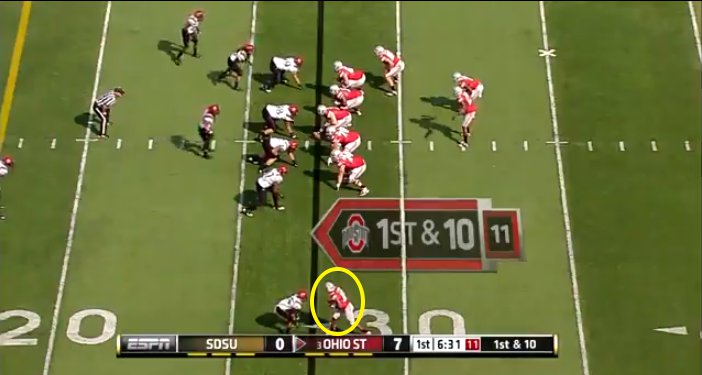 3. Brown is lined up in the slot facing what looks like a fire blitz out of the 3-3-5 stack. Devin Smith runs a 10 yard in and Brown splits the corner and the safety, running a deep corner route for the touchdown. 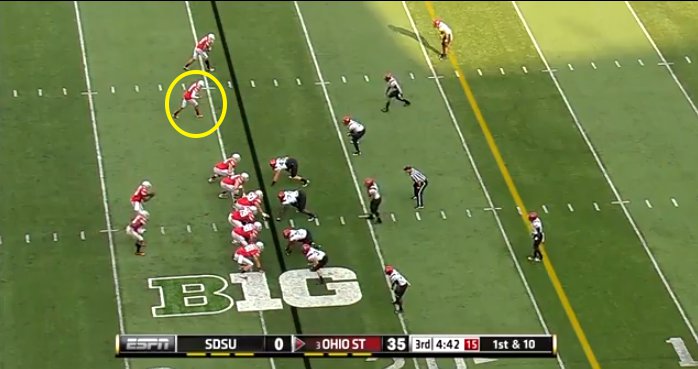 Dontre Wilson is quickly living up to his preseason hype and he is getting more touches every single game. Just like Brown, Coach Meyer and Coach Herman are moving the speedy freshman around the field and putting him in the best position to make plays for the explosive Buckeye offense. Wilson started off slow versus Buffalo but he has been utilized more and more each game. Out of the Buckeyes 228 offensive plays, Wilson has been on the field for 49 of them. Out of his 49 snaps, Wilson has touched the ball 20 times (13 rushing attempts/ 7 receptions) for an average of 9.7 yards per play.

This is how Wilson's 49 snaps have broken down:

*Note: These are based on where Wilson is when the ball is snapped, not where he starts if he goes into motion.

1. Here is Wilson's first touchdown of the season coming off of an option play with him lined up in the Pistol formation. 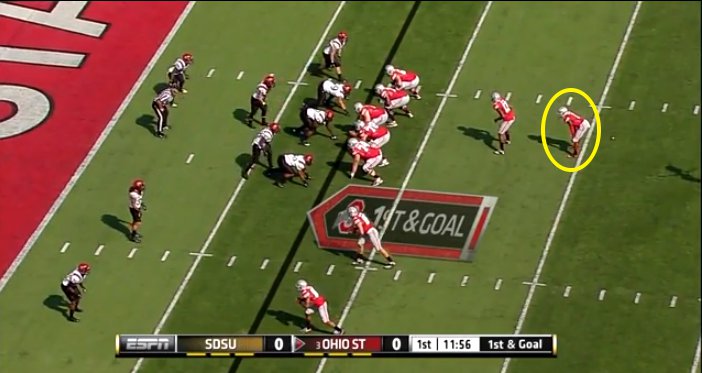 2. Wilson lines up in the Pistol then motions to the left of quarterback Kenny Guiton pre-snap. Jeff Heuerman and Evan Spencer make excellent blocks on the perimeter as the outside cornerback gets sucked inside on the zone read. Wilson uses his breakaway speed to get to the edge and pick up big yardage. 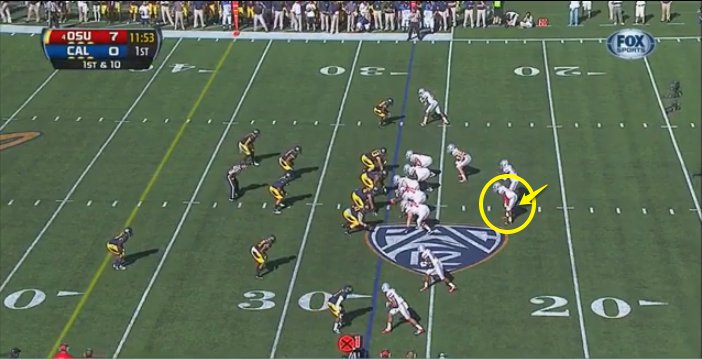 3. Here is a five wide receiver set with Wilson lined up in the inside slot with Heuerman in the outside slot and Spencer wide left. Brown and Smith are bunched together on the top of the screen. Although the pass fell incomplete on a deep shot to Smith, Wilson was covered by a linebacker in space which is a total mismatch. Expect a couple of big plays to happen out of this formation throughout the season. 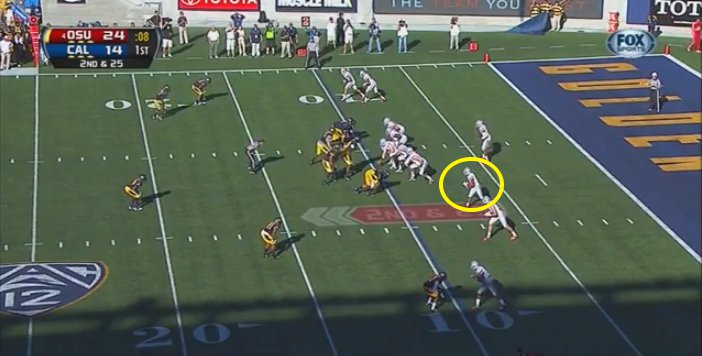 With the coaching staff being able to use the out of conference games almost as scrimmages, Coach Meyer and Coach Herman were able to move around the two biggest playmakers a lot through three games. B1G defensive coordinators will be trying to find a way to slow down Brown and Wilson all season and the two will be the X- factors that will make the offense very explosive.

Having versatile players has always been a staple to Coach Meyer's offense. Whether it was Percy Harvin, Aaron Hernandez, Chris Rainey or Jeff Demps at Florida, Coach Meyer knows how to use speed to exploit a defense. Will Coach Meyer and Coach Herman use Jordan Hall in the Pivot a few plays per game when Carlos Hyde returns? There could be a chance to see Hyde, Hall, Wilson and Brown on the field at the same time. Expect to see Brown moved around to get him on a safety or Wilson to play in the slot more often to get a linebacker on him. With both players knowing how to lineup and play a variety of positions, the possibilities are endless for the Ohio State offense.