Ohio State-Wisconsin: Inside The Playbook - The Badgers' run game

We look at how Wisconsin has utilized a combination of a zone scheme and power O, along with multiple TEs, to really find run game success.

Share All sharing options for: Ohio State-Wisconsin: Inside The Playbook - The Badgers' run game

Over the past, oh, I dunno... Let's just leave it as in the past, Wisconsin has been known for their potent run game. While Alan Ameche, that old Iron Horse, isn't walking through to run his offense any time soon, the Badgers seem to be doing pretty well dating back to the Alvarez era, er, the Alvarez coaching era, er, that first time Alvarez was coaching Wisconsin on the sideline, and, well, this introduction is all over the place. But I *do* have a great Alan Ameche story for those willing to hear, for those who like old timey stories that may or may not be true about really old Wisconsin Heisman Trophy winners. For another time, I suppose.

I don't want to get too in depth about how these plays work, and instead spend time how they work off each other. In several places, I have previously discussed inside and outside zone runs. You can also see a lot of the blocking rules here.

Outside zone is the Badgers' favorite run play. We'll discuss a big reason it has been so successful in a bit. Here's a diagram: 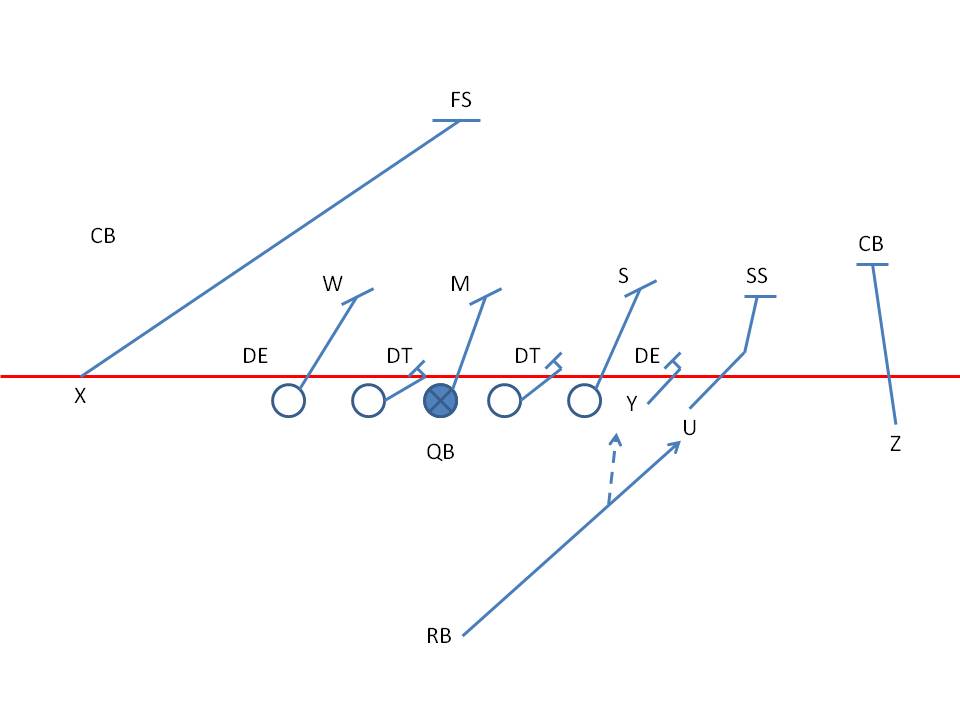 To counter that, sometimes Wisconsin will run inside zone. Initially inside zone looks very similar to outside zone, but it will end up being a more drive blocking scheme, with the option of cutting the play to the backside. 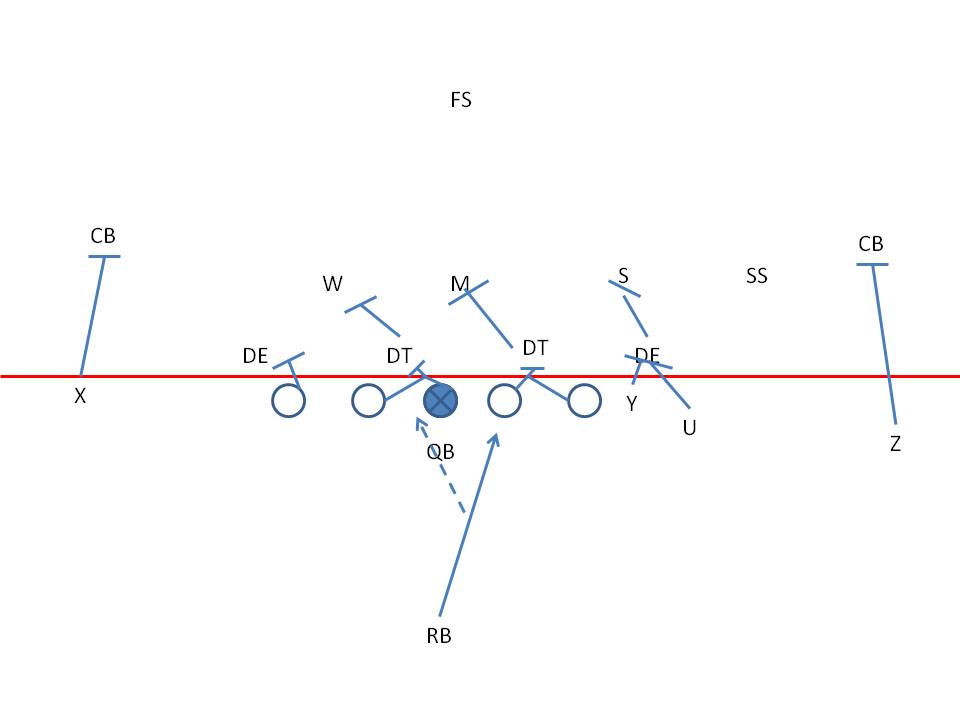 I have discussed Power O in a lot of depth (in two parts, Part I and Part II) back when I thought Michigan was going to run Power O, you know, like they always claimed they were going to. Yup, that didn't happen, so now I get to link those posts here. Anyway, here's how it looks: 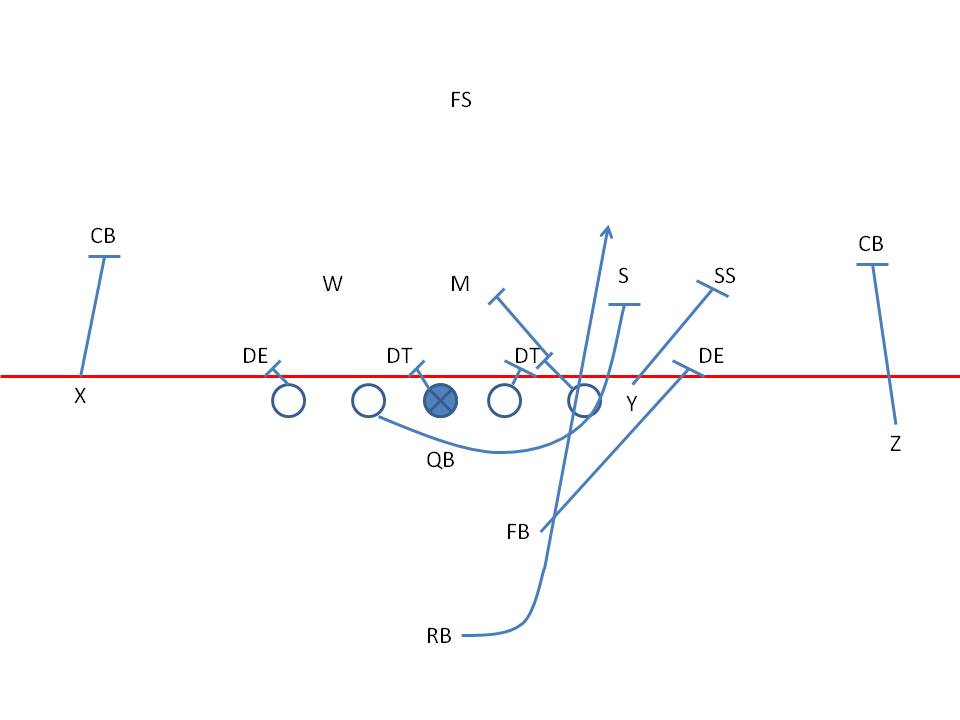 This is a great counter to the zone run because rather than the linemen stepping to the play, they are down blocking away from the play. If a defense isn't sound in their keys and reads, they will be slow to the point of attack and the run will really open up. Wisconsin has been very effective running Power O as a change-up from the zone.

I'm just going to drop some basics here just so I cover all ground and don't come off as neglecting these things when regarding Wisconsin's running success.

The Badgers have been great at developing offensive lineman and recruiting a lot of depth at the position. By the time most of them play, they have been in the system for at least a few years and know the blocking schemes inside and out.

By running pretty much the same system for the past decade+, Wisconsin has known who to recruit and have allowed the linemen to develop into their system without ever confusing them by using different schemes. This means that all the practice time is going to becoming great at only a few plays rather than learning a bit of one offense and then switching before they have fully developed within that system.

Lastly, I want to point out the running backs. Yeah, Wisconsin has done pretty well for themselves there and that always helps. This year, they have landed on possibly the best tandem in college football with James White and Melvin Gordon III.

Wisconsin has done a great job of developing tight ends and fullbacks that can really block. The FBs have been terrific over the years, particularly in the gap-scheme change ups. The TEs have also been great at sealing the edge, often even taking on defensive ends, before walling the second level inside so that the RB can escape outside. Better yet, when the second level attempts to shoot up and outside to set the edge, the TEs have been great at kicking them outside, giving the RBs a chance to quickly cut up field and pick up yards.

From a schematic standpoint, there is something significant about utilizing multiple TEs in an outside zone blocking scheme.

Here's a look at an outside zone in a Peyton Manning style offense. The dashes indicate the gaps the defense must cover: 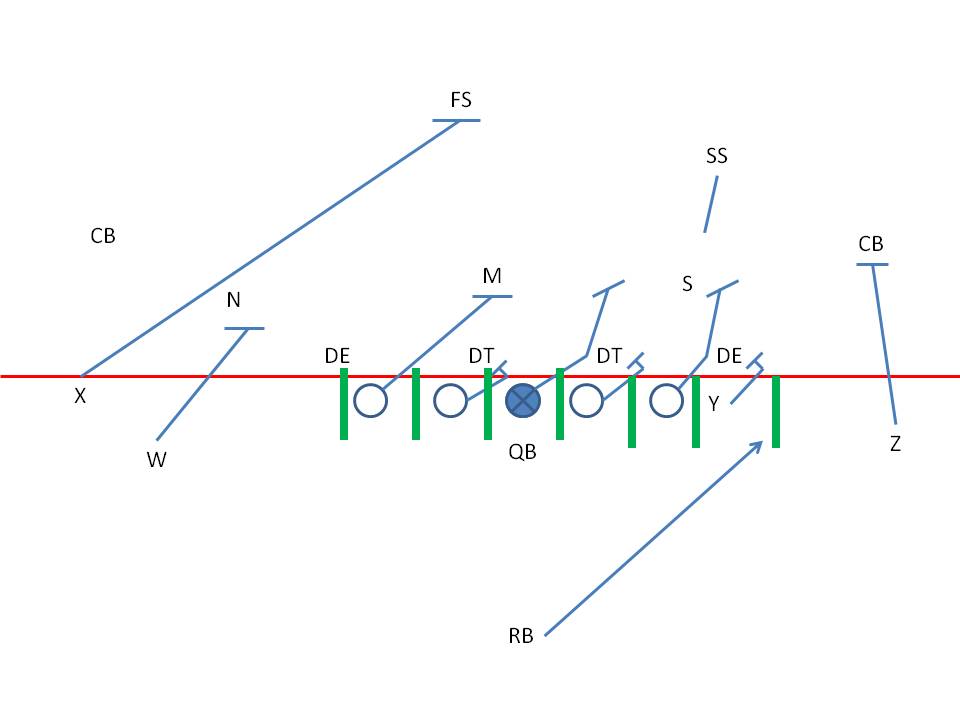 That's seven gaps that must be filled.

Here's how Wisconsin will run it out of a wing formation: 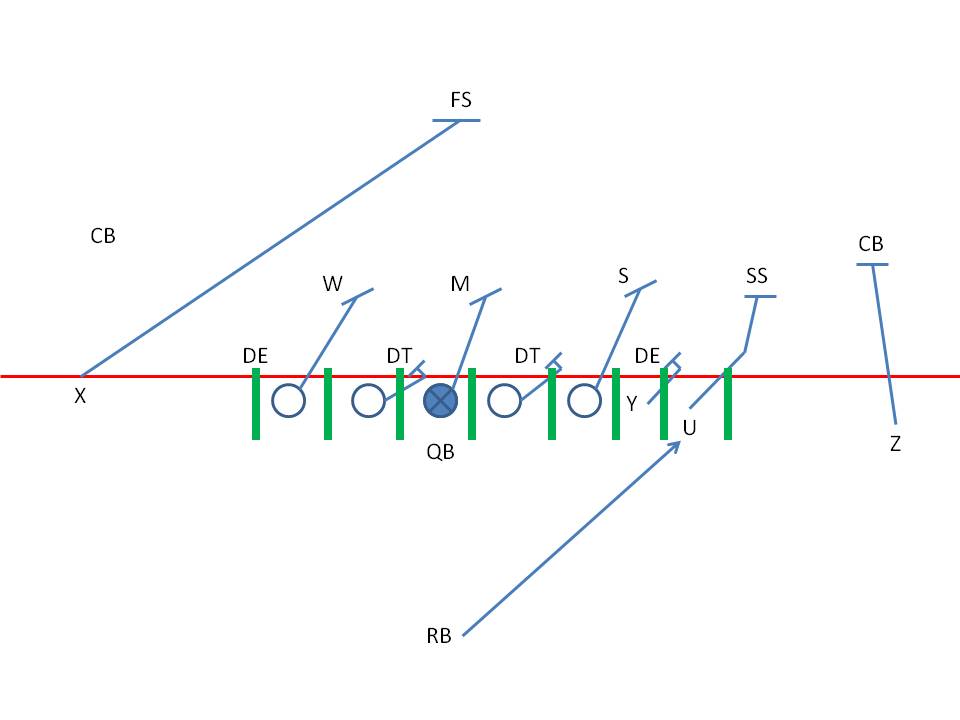 That's eight that must be filled, and even more than usual playside, meaning there is a greater likelihood that one defender won't complete his assignment and the Wisconsin RB will find the opening. Unless OSU is comfortable bringing eight in the box – something that leaves a lot of grass open deep against a formation with two TEs and two WRs – than someone must get a win to defend two-gaps at the point of attack rather than just managing to do their assignment, a much more difficult task.

When you add in a FB, you essentially add another gap to the outside of each TE. What this means is that the defense is required to stretch itself horizontally in order to defend the run and remain gap sound. Any sort of hesitation, such as if they incorrectly read the OL (say Wisconsin runs Power O instead of zone), suddenly Wisconsin is much stronger at the point of attack. So you are requiring the defense to commit more bodies forward and not help the WRs over the top, or they are required to quickly read and simply beat the offense to the point of attack while remaining gap sound, which is extremely difficult.

If any one of those gaps goes unfilled, the zone blocking reads by the RB (from outside to inside) will eventually give a clear opening for the RB to strike through. As long as the OL prevents penetration, and the TEs play their seal/kick principles, it becomes extremely difficult to defend Wisconsin's run game without opening yourself up to the risk of the play action attack.

So, in short, you see a few of the reasons why Wisconsin's run game is so successful. The Badgers use of multiple TEs and occasionally a FB really stretches a defense horizontally (their line tends to have wide splits, or gaps between them, as well). This means the defense has to be great at playing sideline-to-sideline without getting pushed past the play. So the defense not only needs to be athletic, but also strong and fundamentally sound. That's a lot to require from a defense, and along with the PA pass that goes along with it, it gives a pretty clear reason why Wisconsin's offense is so difficult to stop.