Despite a message to the contrary from a university spokesperson earlier today, a Rivals reporter's source is stating that Ohio State will wear their 2012 Rivalry uniforms this Saturday against Wisconsin.

Per a source of Rivals' Andrew Holleran, Ohio State will revisit the 2012 Rivalry uniforms they wore in last year's edition of The Game against #23 Wisconsin this coming Saturday night. An Ohio State spokesperson told Holleran earlier in the afternoon that Ohio State would not be wearing alternate uniforms against Wisconsin "as far as he knew".

Last year's rivary uniforms had large scarlet and gray (closer to chrome) uniform numbers as well as black stripes around the jersey sleeves. Much like this year's regular unis, the rivalry ones featured seven Buckeye leaves around the back collar. They also featured a Block "O" on the front color. The helmets to go along with the uniforms were more of a dull chrome hue than the Buckeyes' normal gray/silver lids and were topped off with a wider than normal scarlet, white, and black stripe.

Perhaps not coincidentally, the Buckeye Room put replica jerseys of last year's Rivalry uniforms on sale just this afternoon. The uniforms they have available are the numbers worn by Braxton Miller and Corey Brown/Ryan Shazier. Here are larger photos of those replica jerseys: 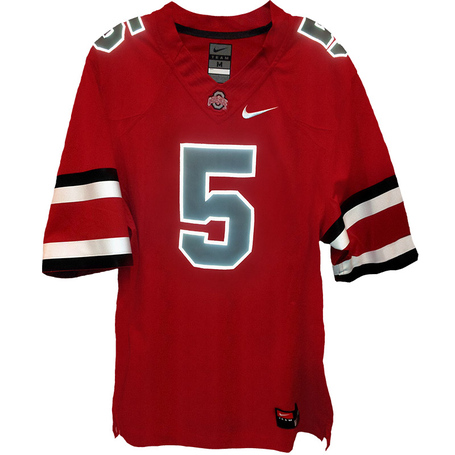 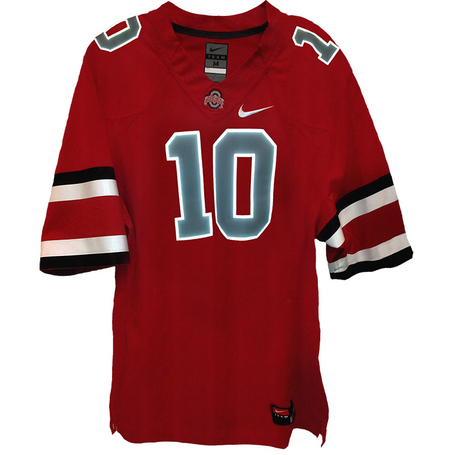 And here were photos from last year's 2012 Rivalry uniform's unveiling: