The Buckeye defense will have their hands full with the nation's leading rusher on Saturday. See how Wisconsin uses Melvin Gordon in their fierce running game.

Buckeye fans know James White, the speedy running back who spent most of his career in Monte Ball's shadow. But who is Melvin Gordon, the running back who was the odd man out last season but now currently leads the nation in rushing?

Standing at 6-1, 207 lbs, the redshirt sophomore is taking the country by storm, rushing for 624 yards on only 53 carries, an absurd 11.77 yards per carry. Out of his 53 carries, 23 have gone for a first down, 15 of them have gone for 10+ yards and eight have gone for 20+ yards. He is the type of back that every time he touches the ball you expect something big to happen, the prime example of a home run hitting back.

When thinking back to last season, Gordon's coming out party came against Nebraska in the B1G Championship Game, rushing for a career high 216 yards and a touchdown on only nine carries. With the Badger backfield crowded last season, Gordon only carried the ball once versus the Buckeyes, expect that to never happen again.

With Gordon and White having similar attributes, Coach Gary Andersen has used them the exact same. There isn't one that Coach Andersen favors on the goal line or one whom he favors on third and short, their situational statistics are almost replicas of one another. The only thing that stood out is that Coach Andersen would rather have White in pass protection on third and long. Other than that, the two are a true two-headed monster.

Coach Andersen runs the same smash mouth, pro-style offense that Coach Bret Bielema ran for years, so expect to see Gordon line up in the I-Formation or Singleback behind quarterback Joel Stave the majority of the game. But to use Gordon's speed, the Badgers' also use him in motion on jet sweeps. The best example of this would be the two jet sweeps he ran versus Arizona State, one resulting in an 18-yard gain and the other resulting in an 80- yard touchdown run.

Here are the different ways that the Badgers will use Gordon on Saturday:

1. Wisconsin comes out in the I-Formation with the tight end in a flex position. This is a common formation for the Badgers and the Buckeyes will be seeing this a lot with Wisconsin using both White and Gordon at tailback. 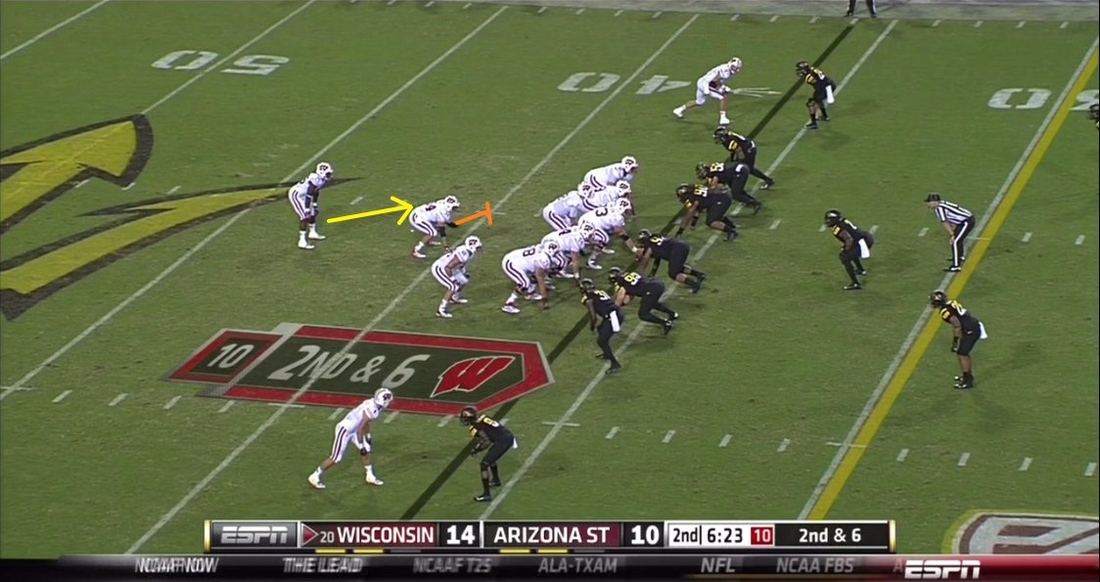 2. This is your old-school Full House Formation with Gordon getting serious blocking help in front of him. The Badger offensive line does a very good job of getting to the second level and once Gordon gets past the linebackers it is an automatic 10+ yards. Also, the receivers do a great job of blocking down field, giving Gordon 1 on 1 match ups in space. 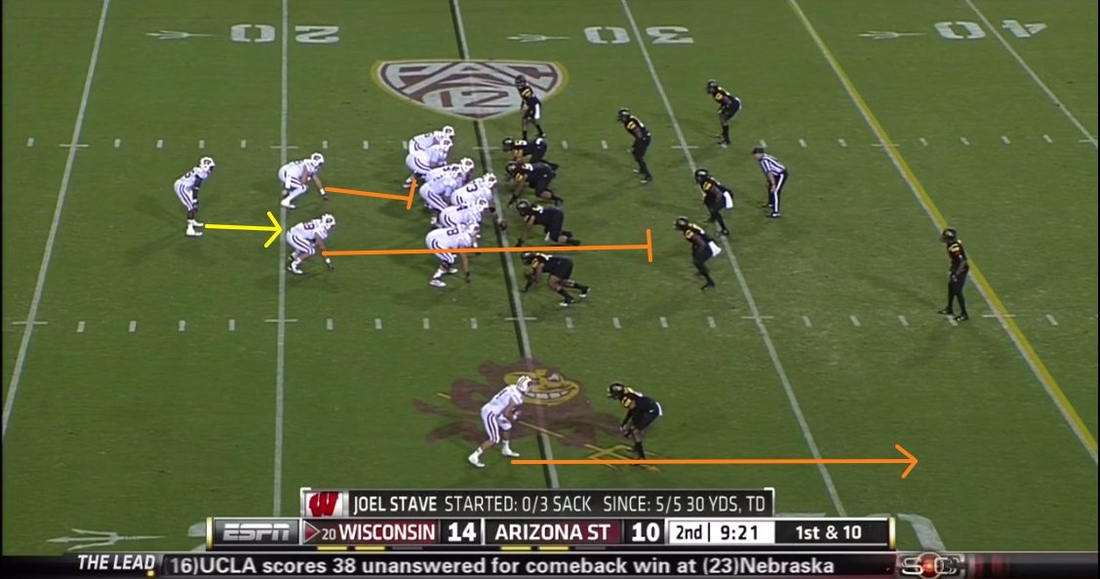 3. Coach Andersen ran this exact play twice in the Arizona State game, both resulting in huge gains, including an 80-yard touchdown. The defense focuses on White in the backfield as Gordon lines up as a receiver and comes across in motion. The Badgers have the offensive line heavy to the right side with two tight ends... 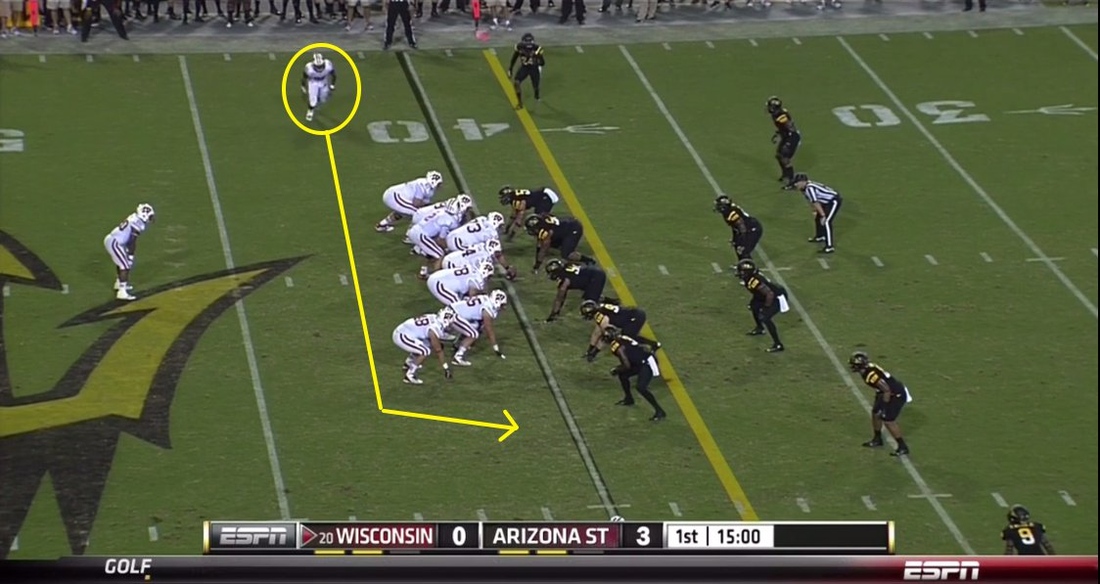 Gordon takes the jet sweep hand off, the offensive line and Stave sell the hand off to White and the defensive line flows to White. The tight ends and the receivers have easy blocks to make and Gordon is off to the races, using his breakaway speed. 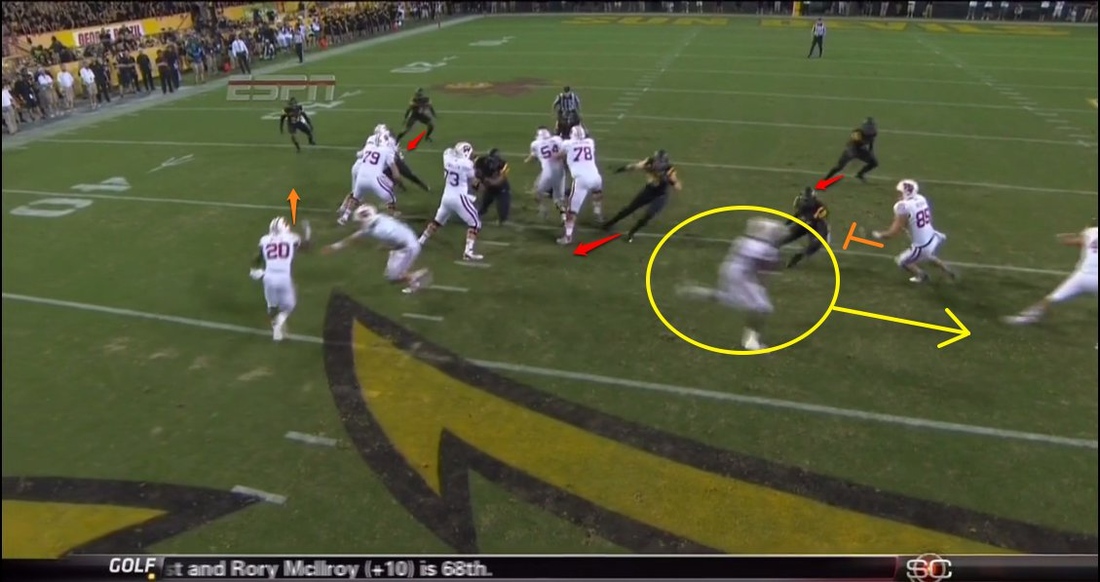 4. Here are a couple of GIFs showing Gordon's wheels and big play ability:

So, how do the Buckeyes inexperienced, yet talented front seven slow down or contain Melvin Gordon? The easiest thing to say is to have the offense put up points early and take the running game right out of the playbook and force Stave to beat them. But in reality, the Badgers are going to want to come out and set the tone by running the ball with both running backs.

When Gordon comes across in motion with White in the backfield, the back side end and weakside backer cannot over pursue, or else they will be looking at the back of Gordon's jersey. The defensive line needs to do a good job of occupying blockers, allowing the linebackers to make plays. Curtis Grant will have to play the game of his life because you do not want to throw freshman Trey Johnson into the fire against this rushing attack.

When facing a pro-style offense, it is important to play sound, fundamental defense by reading your keys and trusting the coaching staff. This will be the first test for the inexperienced, yet very talented Buckeye front seven and hopefully they are up to the challenge.