Ohio State-Wisconsin: Inside The Playbook - The Badgers' 2 RB attack

We look at how Wisconsin will utilize 2 RBs on the field at once to attack the defense, and also as decoys to spring big plays at big times.

Share All sharing options for: Ohio State-Wisconsin: Inside The Playbook - The Badgers' 2 RB attack

Wisconsin has found a creative way to get both running backs – Melvin Gordon III and James White – on the field at the same time. Being two of the better RBs in the country, having only one of them on the field fails to maximize a lot of what the offense can bring to the table. Against Purdue, Wisconsin ran jet sweep motion with an inside zone look from the RB several times to threaten the outside and the interior with their two RBs. They also did a few other things. In this article we are going to look at what this play concept brings to the table, along with two important plays that Wisconsin has run off of it already, and one play you can expect them to run against OSU if they start getting behind the chains and the Buckeyes start pinning their ears back.

I'm drawing up this in a ace double wing, but these plays were also run out of your standard ace formation and a balanced solo formation. We'll get to those later. But the inside zone and the end around can be run from any of them. 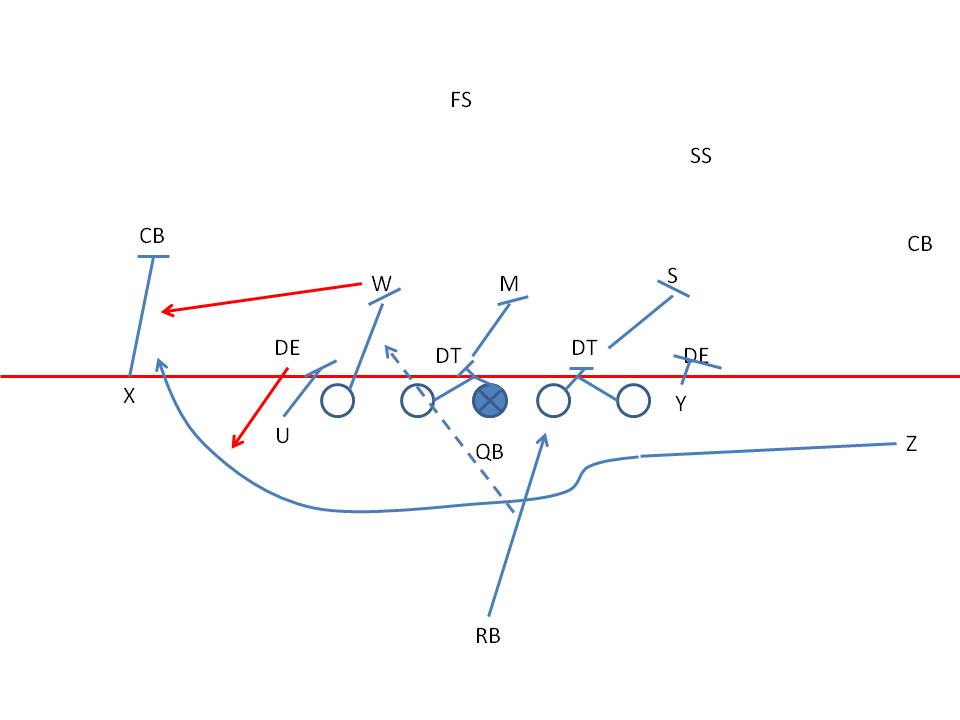 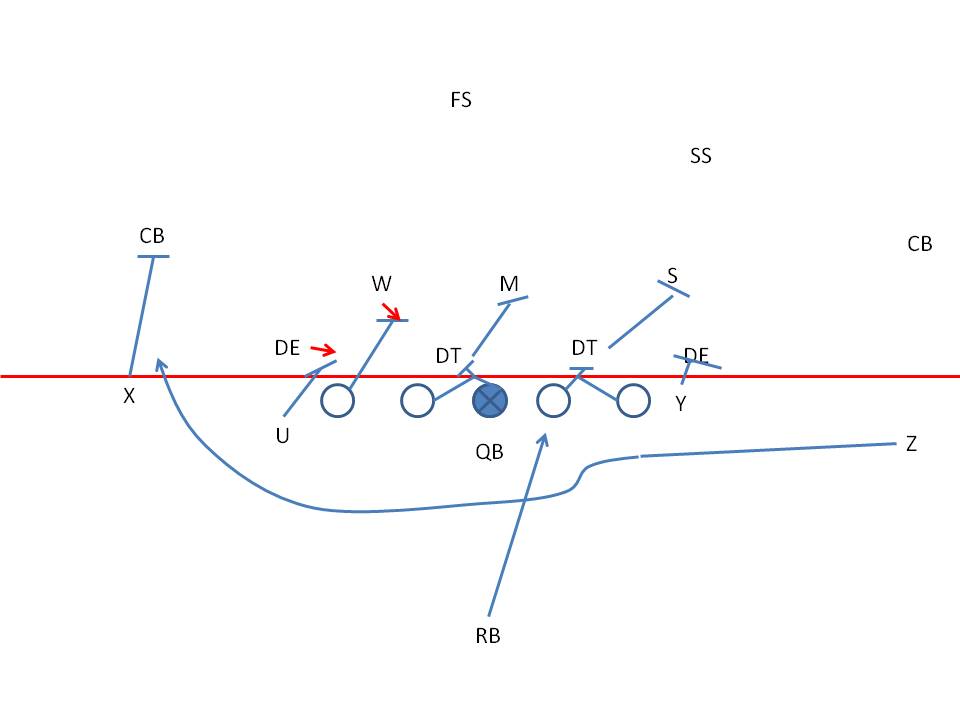 As you can see, it looks exactly the same as the play before. In fact, I just changed the arrows on the defenders, because the look is exactly the same down to the blocking scheme and everything. I discussed this a bit previously in the inside zone section. But the backside LB will be tasked with stretching out the end around. But he is also responsible for the backside A-gap when defending the inside zone. He is put in a quandary.

If he doesn't stretch out the end around and Wisconsin gives, then it's going to be a huge play as the whole defense is sealed inside and White just needs to beat a safety. If the LB attempts to string out the end around but it ends up being an inside zone give and Gordon cuts it back in the designated cut back lane, then he is quickly into the second level and onto the safety with one man to beat between him in the end zone.

To counter this, defenses will start to put more defenders in the box. But Wisconsin has some answers for this.

The bubble screen makes it so the safety over top of White can't cheat inside. It also forces the CB to White's initial side to defend what is essentially the run. So Wisconsin is able to stretch the field horizontally with the bubble. 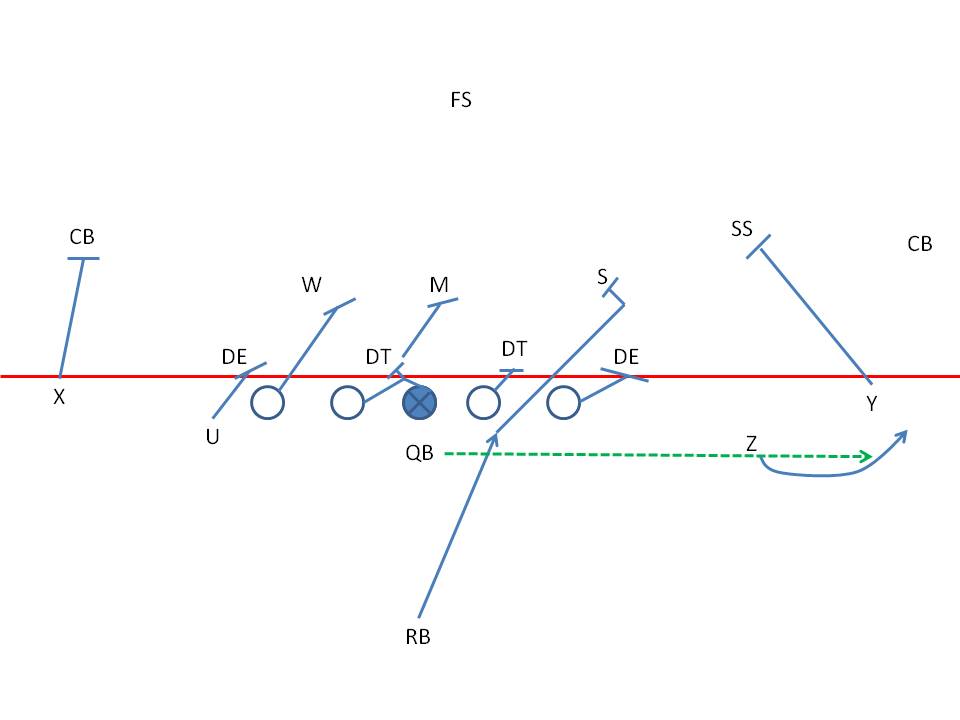 This makes it difficult for opposing defenses to hide any defenders without them having to take on a RB in space. It really stretches defenses so they can't play the box and the jet sweep side. They need to defend the whole LOS. And the LBs can't instantly flare out to the bubble, because all the action in front of them looks like inside zone, which can just as easily be run with the bubble action to the outside.

Not only does Wisconsin stretch defenses horizontally, they can also stretch defenses vertically with merely a two-man route and sending White into the flat off of the jet sweep look. This forces the single high safety to maintain his center field responsibility. It also makes it so the corners can't just press the WRs on the edge in attempt to hold squeeze the amount the offense can horizontally stretch the defense. By threatening them over the top, they have to play off man. This makes it more difficult for them to defend the bubble and the run. Now the corners are struggling with what to do, and if they start cheating up or taking their eyes into the backfield to help in run support, then they will be beat over the top. 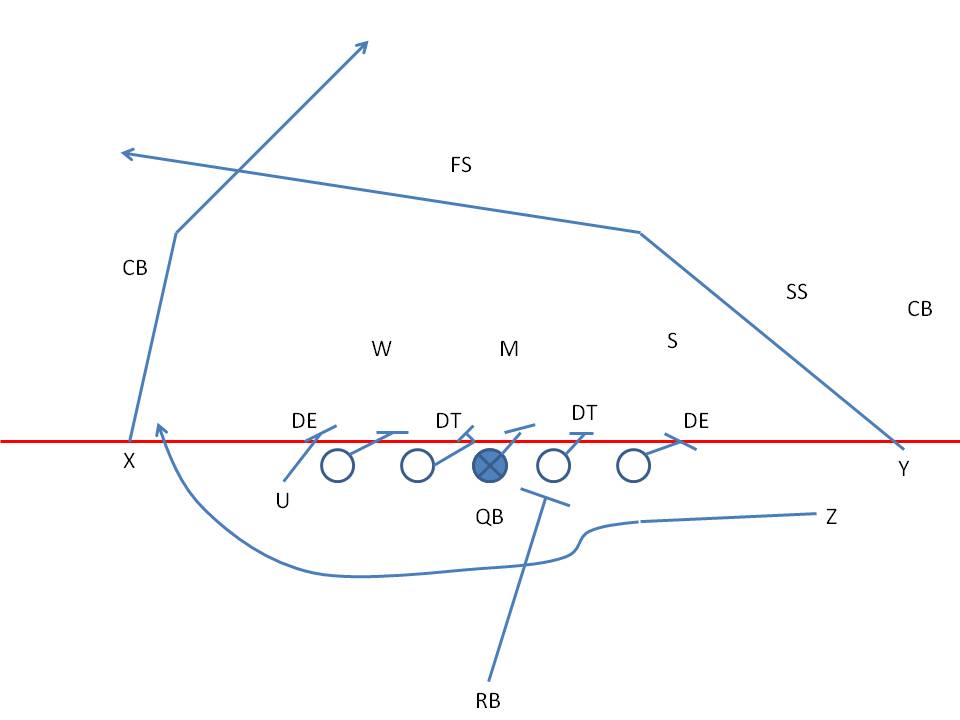 Here's a play that Wisconsin hasn't run yet, but you can expect them to in the future: 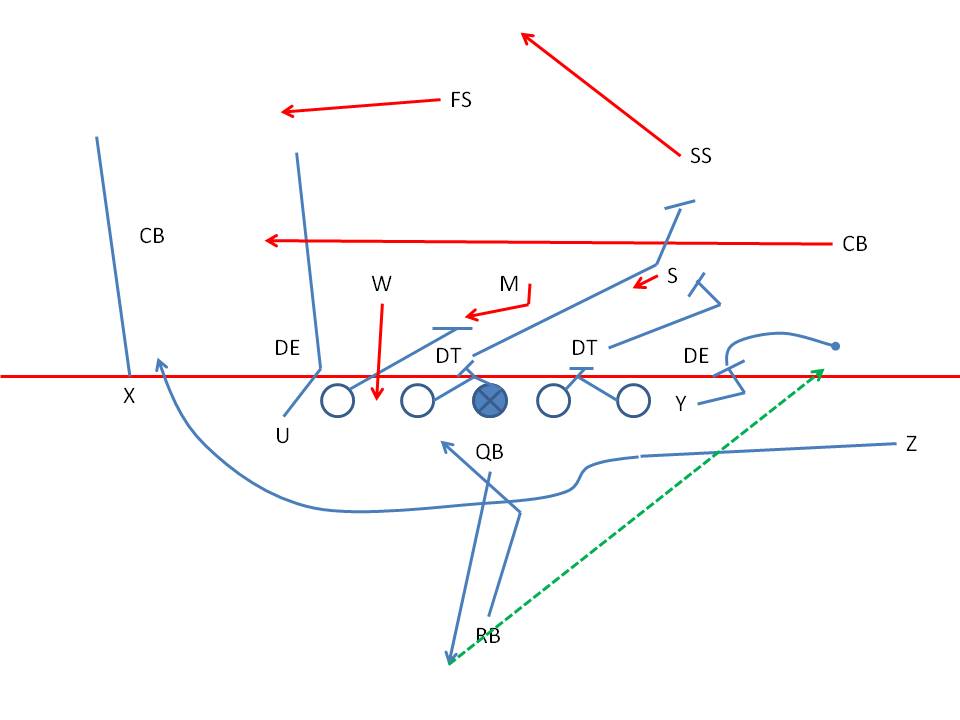 What teams will do is start rolling their coverage to the jet sweep motion. That helps defend the run as well as maintain good deep coverage without being worried about being beat over the top. A key here is to call the play at the right time.

OSU is a very aggressive defense that tends to get lost and out of assignment. But they are extremely fast and athletic, so the goal is to use that against them. If OSU has just scored and Wisconsin is struggling, or say they've just given up a sack and it's 2nd and 15+, OSU will start pinning their ears back and attacking downhill. By threatening the inside zone and jet sweep, the LBs will commit upward to stop the run on their own. The CBs will stay tight on their man as the WRs push them deep. Then, the backside TE can leak out and a few blockers can leak out in front of them after screen releasing the DL on that side. What you'll end up getting is 2-3 blockers in front of a tight end with only a free safety unblocked downfield. Surely, the defense will likely be able to funnel the TE to the sideline, but not until after they've picked a first down and a lot of yardage to gain momentum back.

What is key here is that OSU must be aware of the formation. Wisconsin ran these plays out of several different formations. Understanding how the Badgers can utilize the formation in different ways will be essential to snuffing out a play like the backside screen I drew above.

While the amount of passing concepts that can be run from this look is limited, where the offense can attack is not. There are many ways that the offense can take advantage of defenses with two of their better players, and it involves constantly making the defense wrong with correct playcalls. Expect to see more of this when the Badgers take on the Buckeyes on Saturday.