DraftExpress.com has released their rankings for NBA prospects in the Big Ten, and one Buckeye-related nugget caught my eye. Here, we'll discuss the merits of both Shannon Scott and Sam Thompson as they relate to the next level.

As they do every season, DraftExpress.com is in the process of releasing a preseason ranking of draft prospects by conference. The Big Ten rankings have been about what we should expect. The top 15 look this:

While I don't necessarily agree with all of the rankings -- for instance as readers will see throughout the season, I'm not a very big fan of Payne's game and would rank him at #8 with Craft dropping and Stauskas sliding ahead of him into 7th -- they're a very strong start and adequate base with which to start the season. For the purpose of this piece though, we're going to focus on players farther down the list: Shannon Scott and Sam Thompson. Separated by one spot in the rankings, DX obviously doesn't believe there is a lot of difference between these two players. However, let's take a closer look at them and see if we can discern a tangible difference in their games and NBA potential. 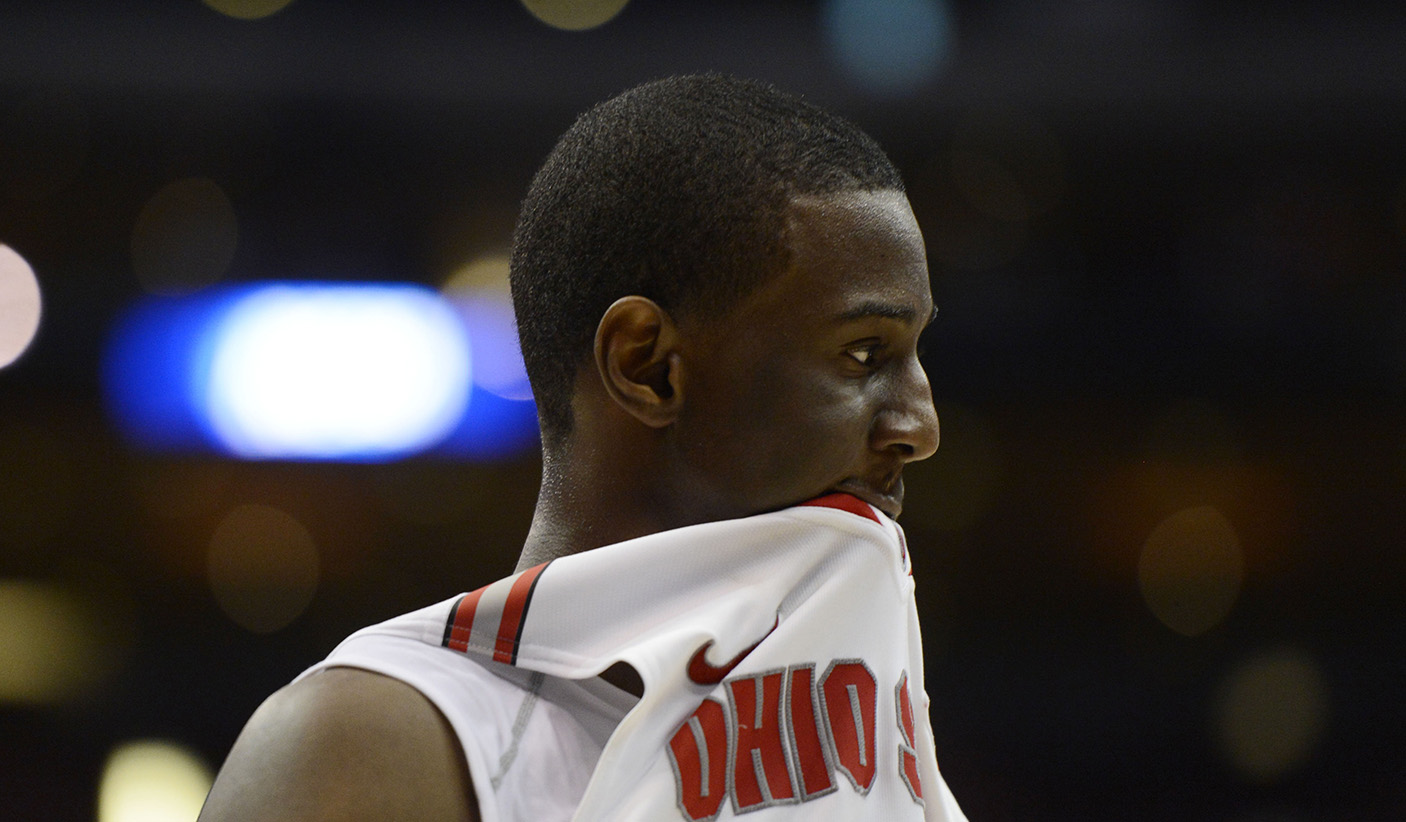 I was surprised to see Shannon Scott on this list at all, personally. Right now, the unfortunate and harsh reality of Scott is that he's a point guard that can't shoot and struggles to settle down an offense in the half court. His best attribute right now on offense is his ability to get out into transition. But at this stage he's a transition point guard that struggles to finish when he gets there, as he only averaged .915 PPP this season on transition attempts. What this leads to is an out of control guard who, while providing a spark, can harm his team more than he helps.

That's not to say he doesn't have potential NBA skills. First and foremost, he's among the most purely athletic point guards in the country, with excellent quickness and fast hands. His most NBA-ready skill is his passing ability, which plays right into his athleticism as he can attract defensive attention on drives and pass out to open shooters or diving bigs. In fact, Scott's 33.9% AST% was 2nd in the Big Ten behind only lottery selection Trey Burke last season. This season, Scott could develop into one of the best table setters in the Big Ten if he can develop any sort of jump shot from the perimeter in order to create all too important space in the collegiate game.

The jump shot is the second-most essential part of Scott's development (we'll get to the most important next). If he's unable to develop a jump shot, the Buckeyes should expect to see defenses sag way off of him, which not only cuts off drives to the hoop for Scott, but also creates less space for Scott to find the creative and dynamic passing lanes that he was successful with last season. If teams have to play up on him on the perimeter, it allows him to use his speed to blow by defenders, forcing help defenders to collapse into the paint, and letting him create for others.

However, if he is to have success with defenders playing up on him, the most important thing he can do is start to make better decisions with the ball. Scott's 23.4% career TOV% is far too high for a point guard, and it shows in his tendency to get wild with the ball. The root of these issues are two-fold and seemingly contradictory. From time to time, he can try to do too much with the ball, attacking without purpose or leaving his feet without a plan. However, there are other times where he becomes too passive and seems to lack confidence. A goal for Scott should be to find a happy medium between these two. He needs to be more prepared with the ball, and also feel confident enough that he can be a major part of this offense.

Of course, to assess Scott's NBA potential without talking about his defense would be objectively unfair. He's an excellent on-ball defender who excels both in isolation situations and when defending the pick-and-roll. Coach Thad Matta has taught him how to use his athleticism to become a menace and turnover-creating machine. Scott actually averaged a steal on 5.1% of his defensive possessions, which was in the top ten of all of the NCAA last season. Pundits rave about the Buckeyes' other point guard defensively, but in reality I think Scott has more NBA defensive potential. He relies less on the physicality that Craft does, and uses his feet to stay in front of opposing players. With the hand-check rules in the NBA being what they are, this is a much more translatable skill to the next level for Scott.

Scott has some skills that NBA scouts look for, but he also has more "what ifs" than any other player on the DraftExpress list. This is the most important season of his development. He'll get to play with another point guard who can share the burden with him -- thus hopefully helping limit his usage and turnovers -- meaning there won't be too much pressure on him to succeed. My prediction is that Scott is either in the top 5 of this list next September, or he's off of it totally. And right now, I lean towards him being off of it. 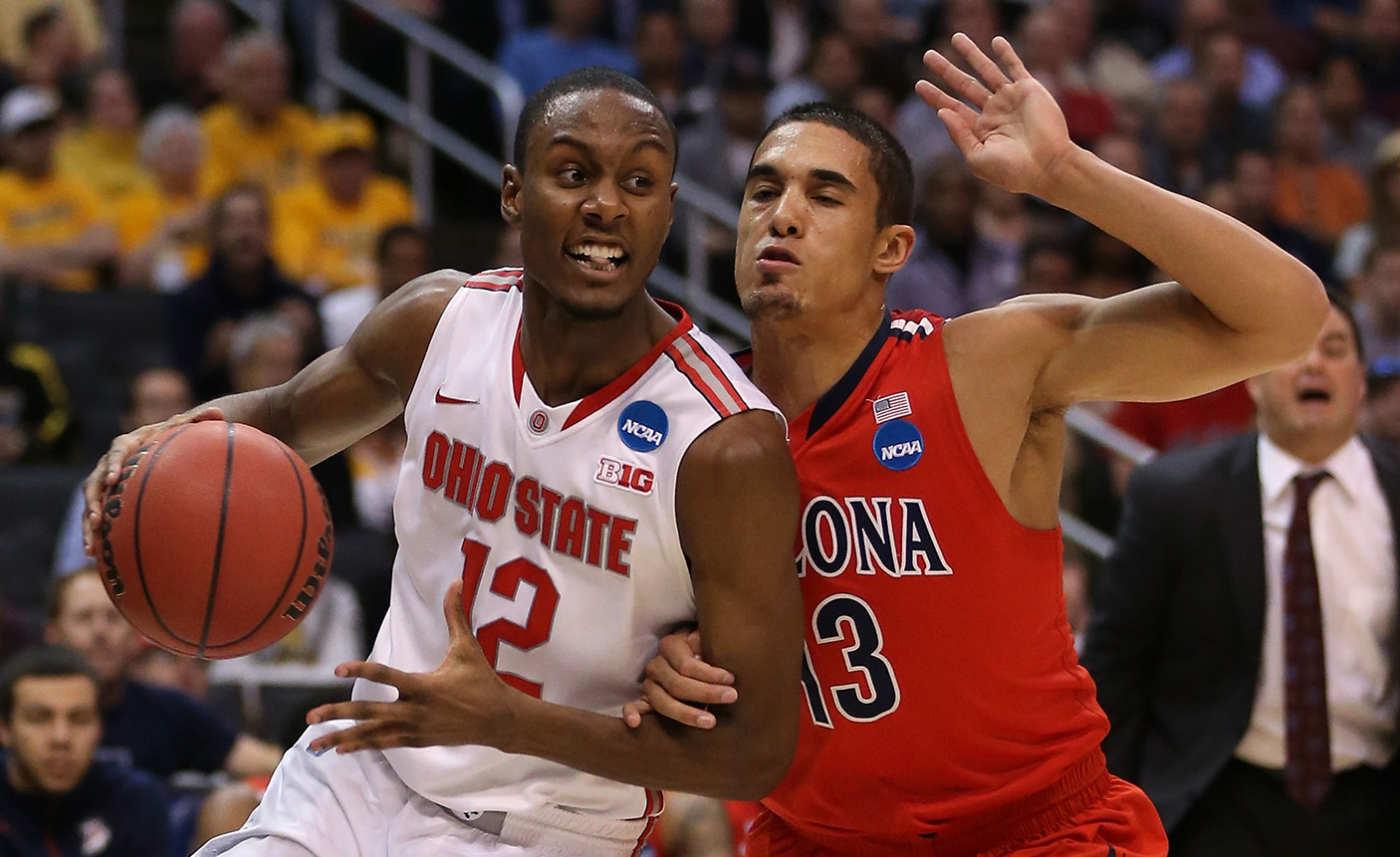 Whereas Scott has a lot of question marks for the next level, Thompson's game is becoming more and more tailor-made for the NBA. With adequate size to play both positions on the wing at 6'7" and a game that oozes athleticism, Thompson's road to becoming an NBA role player is much easier.

The biggest development Thompson made last season was the improvement on a jump shot that seemed to elude him during his freshman season. Thompson's 43% success rate on catch-and-shoot jumpers led the team. In a funny and somewhat unique stat from last season, every single one of Thompson's made threes were assisted, which not only attests to his confidence shooting the ball from this situation, but also his inability in other areas of the game.

Particularly, Thompson is a liability if he needs to put the ball on the deck at this stage of his career. DraftExpress alludes to this in their profile of Thompson here:

Yet, despite the bump in usage, he attempted only 4.2 shots from inside of the arc and 1.5 from beyond per game, resulting in a meager 12.5 points per 40 minutes pace adjusted. He scored in double figures just 10 times as a sophomore, and only three of these performances came against teams that qualified for the NCAA Tournament.

A look into his play type breakdown on Synergy Sports Technology reveals that 35.1% of his possessions were spot-up jump shots, 24.5% were in transition, 12.4% off of cuts, and 5.7% came out of his work on the offensive boards. In short, despite seeing more playing time and possessions, Thompson is both an extremely limited player as well as one of the least productive small forwards in our database.

These numbers portray that Thompson not only isn't good at handling the ball, but also that he's uncomfortable when he has to, so he just simply doesn't do it. The ability to play within oneself is both a gift and a curse in a lot of ways. Branching out and attempting to create could foster development of this skill for Thompson, but playing within oneself and relying on your strengths while letting others supplement your weaknesses leads to more team success. Thompson chose to play within himself last season while letting others like DeShaun Thomas do the heavy lifting on offense. However, Thompson will undoubtedly be counted on to do more creating with the ball this season, so we'll get a clue immediately as to whether or not he has been able to improve his ball-handling.

Even without the improvement in ball-handling though, I think we could see a Victor Oladipo-like (although not nearly as drastic) improvement in Thompson's numbers, where his usage leaps but his efficiencies stay the same. If Craft and Scott can get him the ball in the right spots, Thompson is already killer in transition and solid shooting the wing three-pointer. The three-pointer and shots at the rim are the two most efficient shots in basketball, and Thompson is exceedingly efficient from both ranges.

Plus, the athleticism that makes him a terror in transition has also translated to the defensive end. Thompson is an intense defender that takes risks and forces turnovers with both his ability to force steals and block shots, where he averaged over 2 blocks + steals per 36 minutes. While he lacks the elite length that most defensive NBA wings do with a wingspan of only 6'9", his mindset and athleticism should give him potential to grow on this end.

Even if he only slightly improves his ball-handling though, a guy like Thompson is what most NBA teams are looking for. A big wing that can shoot open threes, leak out and finish in transition, and defend both wing positions has a ton of value in the NBA, regardless of his ability to create for himself. I'm a rather large fan of Thompson's potential in this regard, and would easily place him above Craft when considering NBA prospects.

It's worth mentioning that both guys really need to put on weight and strength in order to succeed in the NBA. The biggest thing to remember about these two guys is that they are both borderline top ten potential NBA players in a conference that has averaged about 4.67 players drafted per season over the past three seasons. So these two guys are very borderline as far as NBA draft picks, and that's before even discussing incoming freshman this season or next.

That is part of the reason why I pretty clearly like Thompson more than Scott. He has a clearly defined NBA role as a wing defender that won't attempt to do too much offensively. We haven't seen that kind of certainty yet from Scott, and I don't think that it's a certainty that we ever do. At some point before the season, I'll throw out a ranking of Big Ten prospects myself, and I think it's fair to say that while you will see Thompson on it, Scott will not be.

All stats courtesy of Sports-Reference.com and Synergy