The San Diego State Aztecs run an aggressive 3-3-5 stack defense, how will the Buckeye offense counter it?

Head Coach Rocky Long, former New Mexico Lobos and current San Diego Aztecs coach will be in Columbus, Ohio Saturday afternoon looking to once again confuse Urban Meyer's offensive mind. Back in 2003, Coach Long's Lobos handed Coach Meyer one of his two career losses at Utah by using an odd front, the 3-3-5 stack, something that was never used against a Meyer-led offense prior to that game. In an article written for the Columbus Dispatch, Meyer was quoted as saying "They confused the hell out of us," and "from that point, teams started seeing the odd defense as an answer for the spread (offense)."

There are a few basic ways in which the Buckeyes can attack the 3-3-5. First, the Buckeyes can line-up and use their large and talented offensive line to run at and around the smaller Aztec defense. Although the San Diego State defense is known to bring pressure from both inside and outside, they primarily use a fourth edge rusher. Here, Braxton Miller will be able to read the edge rusher on most plays and execute the inside zone read. Miller seemed to once again pre-determine his reads versus Buffalo, so it will be seen if he will start taking what the defense gives him.

Secondly, the Aztec defense will force Miller into making quick decisions. They will disguise their blitzes and bring four to six rushers more often than the B1G defenses that the Buckeyes have/ will go against. Miller's pocket presence is something that he needed to work on in the off-season and we will see Saturday if it has improved. Especially if the defense is in a cover 3, Miller will be expected to release the ball very quickly on Saturday, using bubble screens, quick screens, slants, curls and quick throws to the running backs to avoid getting sacked.

I have touched on the 3-3-5 stack before and what the each individual defender's responsibilities are but let's take a look at how Coach Long's Aztecs specifically line up against certain offensive formations. 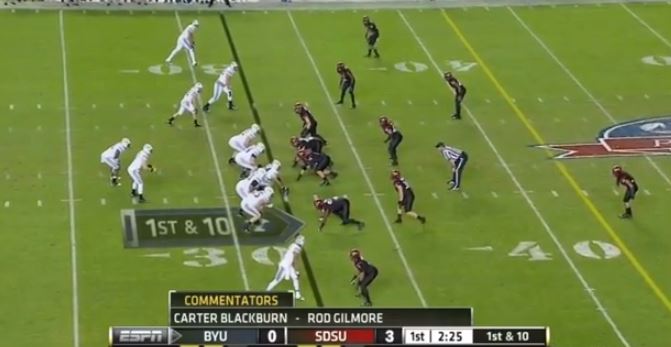 In last season's bowl game versus BYU, the Aztec's primarily lined up like this when the Cougars lined up in a trips formation. There are the three down linemen, two linebackers stacked and the third linebacker rushing off the edge. In the secondary, they will most likely run a cover 3 which drops the two cornerbacks deep along with a safety but they will also run some cover 1, which is man coverage with a safety over the top and cover 2 where two safeties will drop and the corners will play in the flats.

In the Buffalo game, the Buckeye offense lined up in the trips formation 20 times out of the 69 offensive snaps. With the success that the Buckeyes had running inside versus Buffalo and the more powerful Rod Smith being back in the lineup, expect Coach Tom Herman to run the ball a lot if they see this front as the blocking assignments are not difficult when facing the stack. 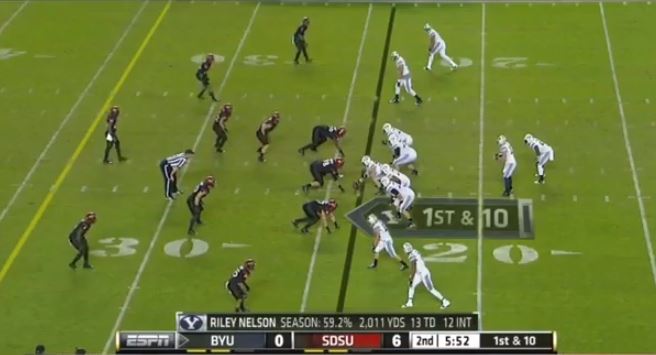 Here is how the Aztecs played BYU when they came out in a four wide receiver, spread formation. Ohio State ran only six plays out of this formation, all using a tight end, but it is something they can go to at anytime, either with the tight end or using a fourth receiver. Here, the Buckeyes can run pretty much anything if they do not bring pressure.

This is an example of the defense rushing six defenders on the play. Here, the BYU quarterback made a poor decision of sticking with the running play even though it was obvious pre-snap that the Aztecs were bringing the house. Miller has to see this and check to a quick screen or another quick hitting pass play.

Here, the Aztecs brought pressure to the quarterback's blind side, bringing two linebackers on a blitz while they ran a cover 3. The offensive line did a good job creating a pocket for the quarterback to step up and either make a quick throw to the crossing route, a check down to the running back, or rush the ball himself. If the Ohio State offensive line can consistently give Miller a pocket/ hole like this, expect a long day for the San Diego State defense.

This is a play that the BYU quarterback wants back. San Diego State rushed five and played man coverage, but did not press. It should have been an easy slant for the touchdown, as the correct read was made by the quarterback, but the ball was thrown slightly late and behind the wide receiver. If the Aztecs show this on the goal line, one would expect Miller to convert this play the majority of the time.