Ohio State football: Inside the playbook - How the Bucks attack deep

OSU had a couple long TD passes against Buffalo, and both route concepts were some of Meyer's favorites. The first was off of a post-fly-drag concept. We will look at how they attack different coverages with it, and how they can adjust it to beat any coverage.

Share All sharing options for: Ohio State football: Inside the playbook - How the Bucks attack deep

Urban Meyer is one of those coaches that, if you sit in a coverage and don't mix it up, he's going to take shots and he's going to put up points. Buffalo did mix up their coverages a bit on Saturday, but they did it in runs for some odd reason. Starting in Cover 1; getting burned. Move on to Cover 0, get veer read to death. Try to put two deep safeties and mix in Cover 4, yeah, alright,;show it a few times and a TD is going to happen. Well, that's what happened on Saturday. In this post, I want to look specifically at OSU's first TD this season; then, in the next piece, we'll look closer at how Kenny Guiton was able to come in and quickly throw a TD himself when Buffalo switched a two-high look.

More: Inside the playbook: How Urban Meyer and the Bucks attack deep, Part 2

A play that Meyer has run for as long as I can remember is a Post-Fly-Drag concept. A lot of teams will have a similar concept in almost any kind of offense, and it will almost always come off play action. One of the reasons it is so successful for Meyer and OSU is because, well, you blitz Braxton Miller at your own risk. Mistimed blitzes or blitz on the wrong side and roll back the playside defenders and you're going to pay the price. So most teams play straight up coverage – at least on down and distances where OSU can have run-pass balance. Here, it's second and 8. OSU has had some success on the veer read option. Buffalo has gone to some Cover 1 to try to get bodies up to the line of scrimmage and the defenses has started peaking in the backfield. This is what ensued: 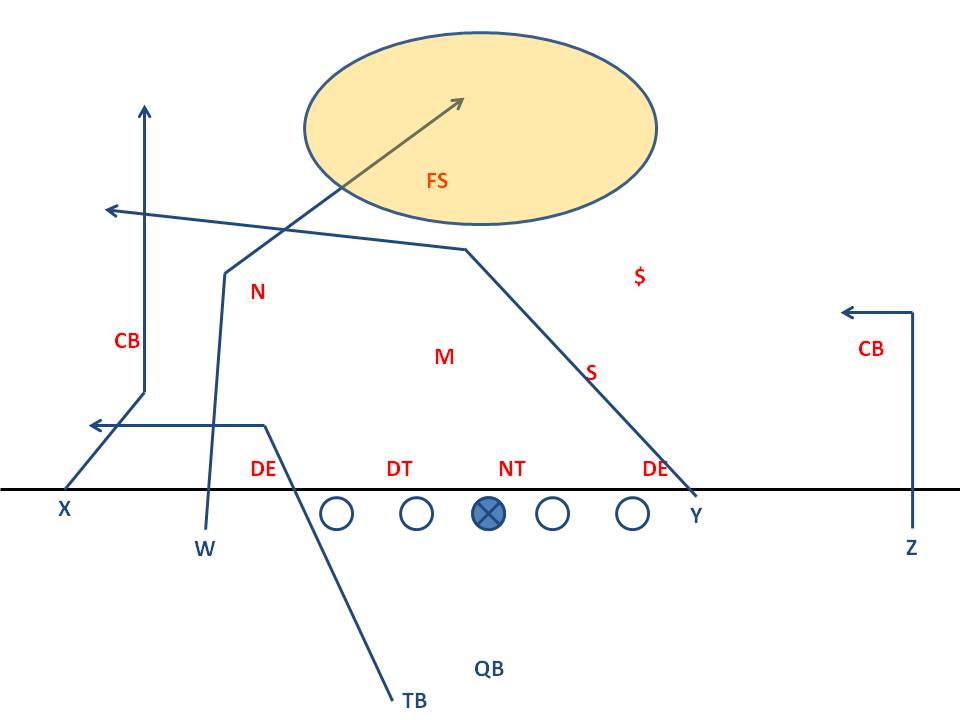 This might even be Cover 0. Either way, Meyer is attacking it the same as he would a single high, and Buffalo is completely lost in the process. Let's go ahead and assume Cover 1 (I'm pretty sure it's Cover 0, but Buffalo is so lost I can't find the 11th defender) and draw up this play against your basic defense: 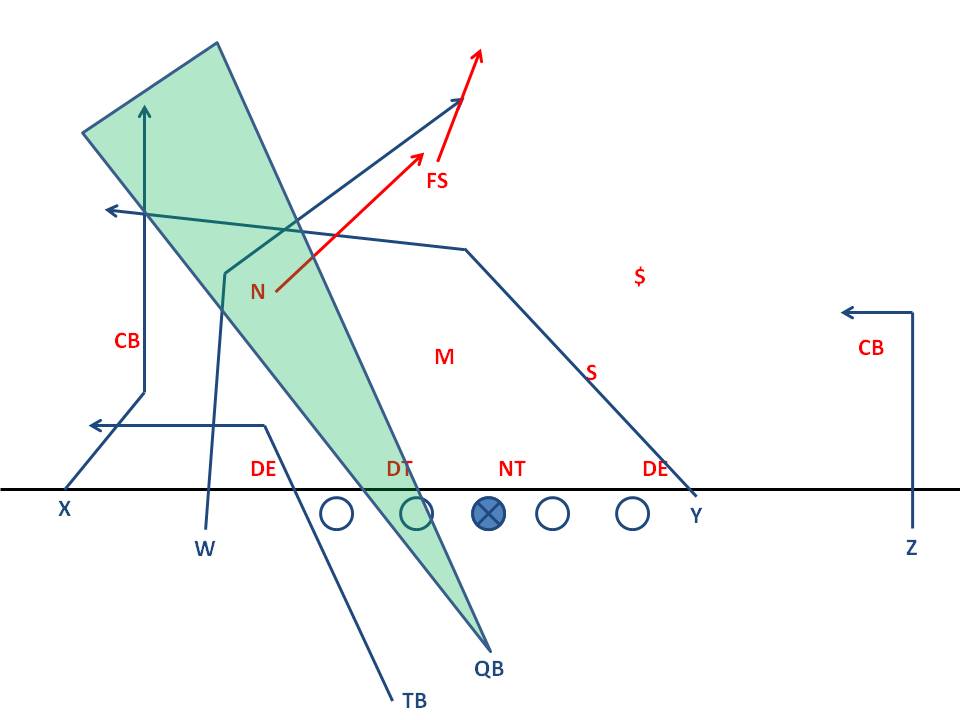 So if the free safety follows the guy in the middle, the throw is to the fly route with lots of grass in front of him. That's kind of what happened above, in as much as the defender covering the slot in Cover 0 left his man to almost actually make a play on the ball because the defender going against the fly route decided to sit this one out or something.

But now let's say the FS goes over the top to defend the fly. It's a simple read for Miller, and he hits the post route with even more green grass in front of him: 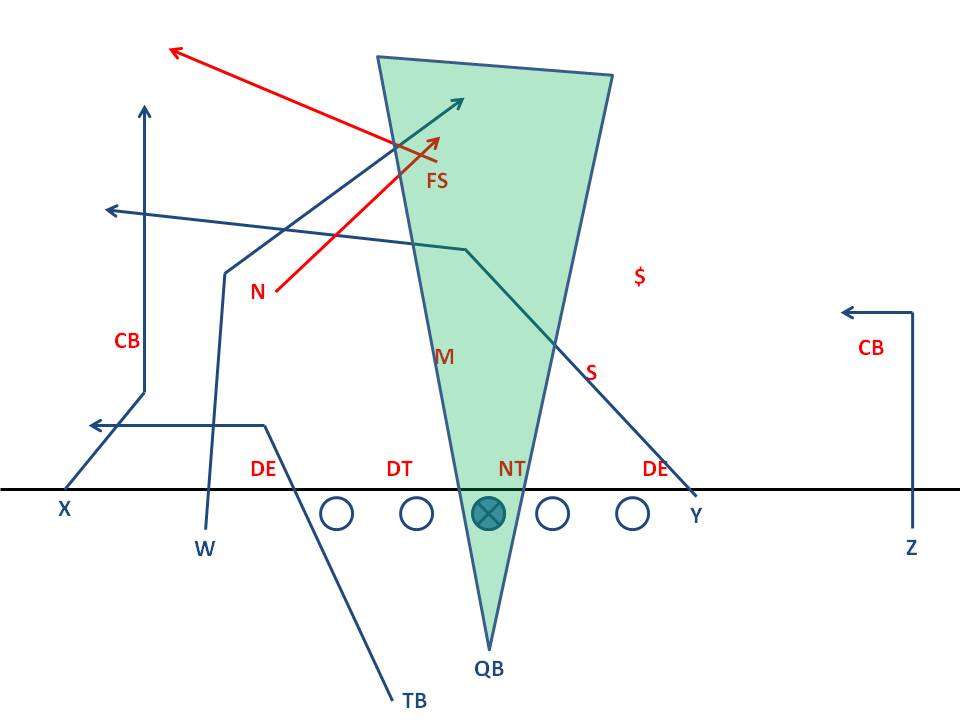 But let's say Miller reads the FS staying in the middle of the field, essentially double the post. He can't simply throw the fly instantly. He has to find the drop CB to that side. The biggest risk here is Miller reading Cover 1 when it's Cover 3 and throwing to the fly WR. This is asking for trouble because the cornerback is dropping immediately, meaning he's most likely over the top of the receiver and can get his body between the ball and the receiver, leading to an interception. So if Miller makes his correct progression, he'll read the CB over top of the X-receiver. This is where tight end play becomes important, as a TE is coming across on a deep drag to hit the area where the dropping CB just vacated. The nickelback in the short zone likely won't acknowledge the TE from the other side of the field, and Miller has an easy pass depending on if the NB actually drops or not: 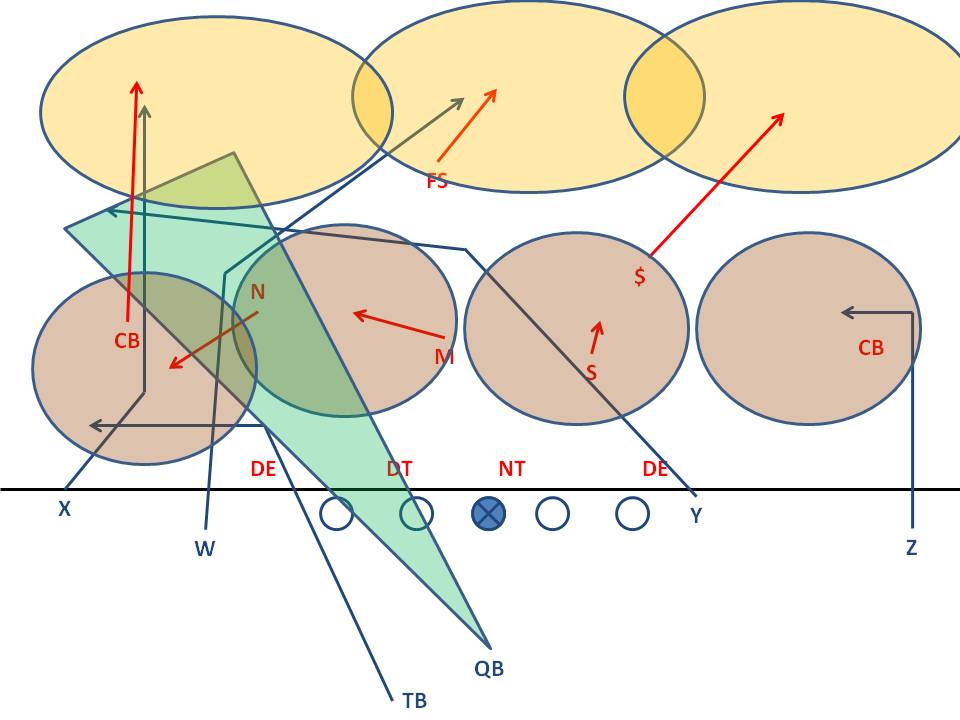 Conveniently enough, this play will also be successful against Cover 2 as long as you have time to let the play develop. That's for the same reason as described above, only the X-WR is running off the safety, and the QB will pick on the flat CB: 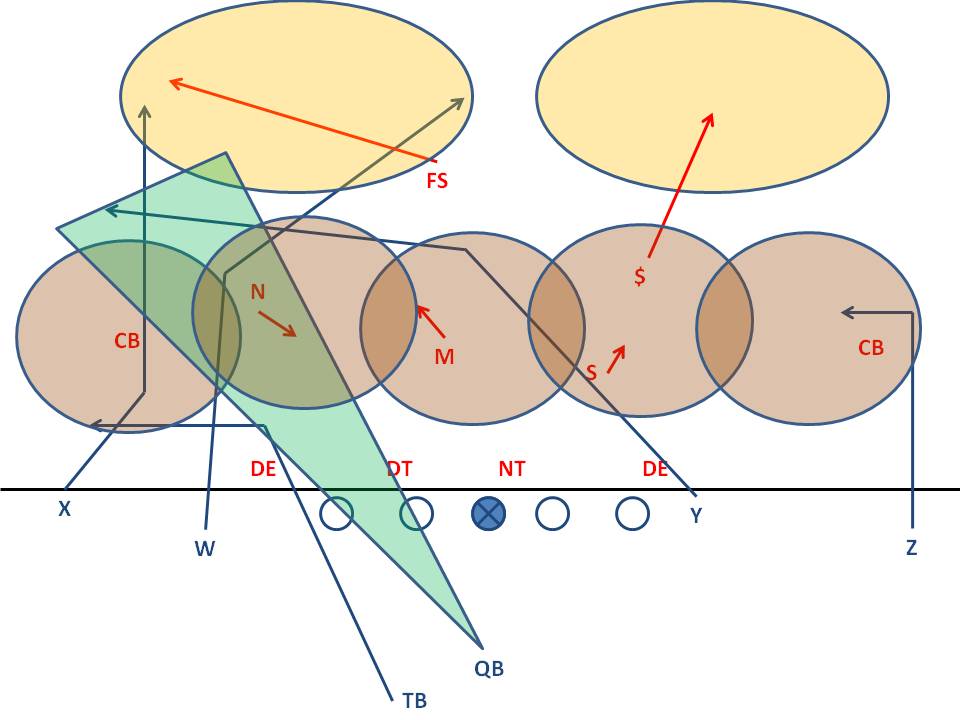 Now theoretically, there should be some adjustments within each coverage to defend this play, but it's extremely difficult and takes a lot of communication to get it correct. But there's also a reason Meyer doesn't just run it every down, namely because defenses can do some different drops to bait Miller into a poor read. Let's assume for a minute that the defense isn't just focusing on this play, but wants to be able to defend against it. The best option is to go to a Cover 2 man under or take the risk and blitz. After all, if you get to the QB, then the routes cannot develop, especially with 5 going out into routes.

But for now, let's focus on Cover 2 man under: 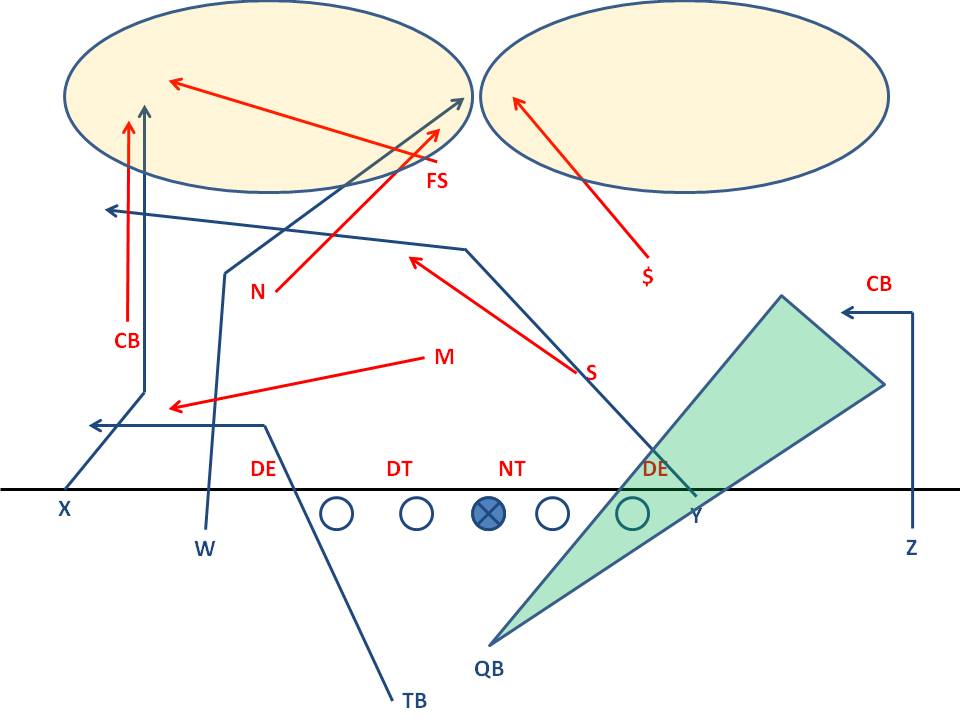 In this instance, it's fair to assume that both deep routes will get bracketed. The TE drag isn't a great angle to pass the ball into against man coverage. But look back over at the Z-WR. He now has a whole half of a field against a CB on an island. Against some sort of zone blitz, he run his in and settles into a zone. Against man, he'll simply beat his man straight up. Threaten him deep, close the gap on his back peddle, make him flip his hips, and break in at about 8 yards. This also makes for an easy hot route against pressure.

In essence, this play to be utilized against any defense, as long as you don't go to the well too often. Against Cover 1 or Cover 0, well, as long as you're running the ball successfully, it's likely to end in a TD.