Ohio State star quarterback Braxton Miller was knocked to the field turf on a fourth down conversion, losing his helmet and in the process taking a shot to the head. Per the Ohio State-San Diego State announcing team of Sean McDonough and former Buckeye Chris Spielman, it looked as though the training staff was also taking a look at Miller's leg.

After walking off under his own power, Miller was shown by the broadcast camera crew having his knee examined and appeared to grimace when he had his knee pressed by the training staff. ABC/ESPN's Shannon Spake also announced that the training staff was working on Miller's knee. Spake later followed up and said per Ohio State's head trainer, Miller had an MCL injury. The plan as of now is to put him in a brace and then get him back on the field.

With backup (and fellow captain) quarterback Kenny Guition in the game (which per rule, even if Miller had been fine, he had to sit off), freshman ATH Dontre Wilson took a handoff to the house to gain his first career touchdown and help give the Buckeyes a 7-0 lead.

Miller was later shown being carted off the field: 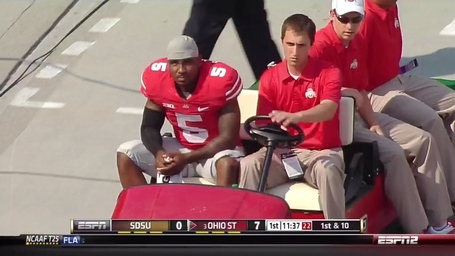 And here was the hit that sidelined Miller:

UPDATE 4:27 p.m.: Per ABC/ESPN's Spake, the injury is a slight sprain of the MCL. Miller has a brace on his knee but will not play the remainder of the game. Per head coach Urban Meyer, Miller could play if necessary, but the team will elect to keep him on the sideline for the remainder of the afternoon.