Cleveland Glenville's Marcelys Jones was a Christmas gift for the ages in 2012 when he became the face of Ohio State's 2014 recruiting class by being the first recruit to give his verbal pledge to Urban Meyer's Buckeyes.

Urban Meyer's second ever Ohio State recruiting class was arguably the best ever in school history. With 10 247Composite top 100 players, a five-star who did this in this past season's Orange Bowl, and a pretty low first-year attrition rate (only three-star OL Timothy Gardner has left the program, so far), Meyer and director of player personnel Mark Pantoni set the bar awfully high – and now they get to try and clear it.

Our demented love child of OBNUG and Casual Hoya's player profiles, "Bucks to the Future", returns for an encore, this time with our sights set on Ohio State's 2014 recruiting class. For each prospect, we'll try to give you a glimpse into their recruitment, let you know what you can expect both right away and long term from them as a Buckeye, as well as provide a comprehensive resource you can flip back to all next fall as a number of these guys start their college careers.

Marcelys Jones' name first appeared on the radar of OSU recruitniks following the latest in a long line of Glenville Tarblooders appearing at Urban Meyer and Mark Pantoni's first ever "Friday Night Lights" in the summer of 2012.

Jones, as many Ted Ginn Sr. tutored prospects are one to do, had his eyes on the prize ($) pretty much out of the gates with the Buckeyes:

"The camp was great, a lot of competition," Jones said."I'm working hard trying to get this O-State offer."

Though Jones had the size that's hard to teach, it was a bit unknown whether he was an offensive lineman or a defensive lineman at that point, and some questions surrounded what he'd project to best after a few rounds in a high-level college conditioning program.

Not long after, national interest in the lineman exploded, with USC, UCLA, Wisconsin, Arizona State, Illinois, Florida, and Tennessee joining Ohio State in reaching out to Jones, but none of them pulling the trigger and offering the then-high school junior.

On Sept. 21, 2012, Jones got just what he was looking for. Stan Drayton, Jones' primary recruiter, helped lay the groundwork to extend a verbal offer to the big lineman, and start a chain of events that would culminate in his becoming a Buckeye. 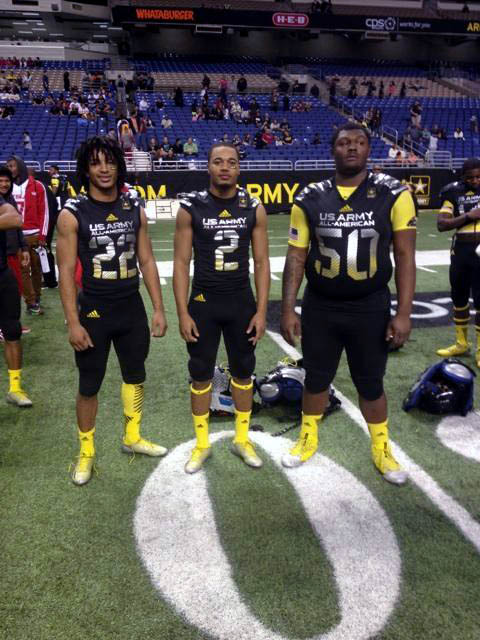 Two weeks later, Jones would take in Ohio State's thrilling 63-38 prime-time win against the Nebraska Cornhuskers underneath the lights in the Horseshoe. Around the same time, the Indiana Hoosiers would offer Jones as well, giving him something to think about outside of his OSU scholarship invitation.

Jones took another information-gathering trip at the end of November by taking in that fall's instant classic win over Michigan to clinch just Ohio State's sixth ever undefeated season in school history. Jones spoke of having no real favorites at the time, but his actions a few short weeks thereafter would say otherwise.

On Christmas Day, as Ohio State fans across the country spent time with their families and opened gifts, the OSU football program got one of their own when Jones kicked off the 2014 class by giving his verbal commitment to Meyer and OSU.

At the time there'd been whispers that Urban Meyer didn't want next-year recruiting classes' players to commit prior to National Signing Day, and while that still may be the case at certain position groups, Meyer showed with groupings of importance he's more than glad to take prospects' early pledges – so long as they're the right ones, of course.

However, that's not where Jones' story ended. The next 12 months would prove to be somewhat long ones for those hoping Jones would be a smooth landing for the OSU coaching staff. Offers from both Florida State and Alabama in the two months that followed would give him even more to think about, and after the hiring of Mark Stoops at Kentucky and some early recruiting success there, Jones would find his name tied to Big Blue Nation almost for the rest of his recruitment in some form or another.

While rumors of flipping to UK circulated basically his entire senior year fall, Jones would occasionally reiterate his steadfastness to Ohio State on social media or otherwise, at least enough to prevent full-blown message board meltdowns.

In early November, in what some viewed as a means to quell speculation, Jones signed a mid-year aid agreement with Ohio State. The new recruiting tool du jour provides players protection that insures a school must honor their offer to prospects so long as they're on track to graduate early and enroll at that school. It also changes the ways in which prospects can interact with their schools, giving them unlimited contact with that program and allowing the school to mention them by name.

OSU fans got a bit of scare, however, when Pantoni deleted his tweet welcoming Jones to the program after the agreement. This caused some to speculate that he'd never actually filed the paperwork, or that he'd changed his plans with respect to enrolling early.

A few weeks there after, it came out that Jones and fellow Tarblooder four-star S Erick Smith would be taking official visits to Kentucky and things got even more intriguing when it was revealed that Jones had signed a mid-year aid agreement with UK in addition to the one with Ohio State. A new NCAA rule interpretation to come out since then states that prospects only get unlimited contact and public acknowledgement from the program that they signed a mid-year aid agreement with first, but that wasn't the case during Jones' saga.

At the 2014 U.S. Army All-American Bowl a few weeks later, in the buildup to the game, Kentucky rumors were still on overdrive, causing a couple of Wildcats recruiting insiders to put in flip picks on 247's Crystal Ball for Jones to UK. But as the day of the game approached, Jones assuaged all trepidations by announcing he'd still be early enrolling in Columbus (though he'd later briefly backtrack on this by saying he wouldn't) and at the very least, seemed to celebrate when Smith announced his commitment to OSU.

This past week, with two snow days starting off the Spring 2014 semester in unprecedented fashion in a post-quarters system world, there remained some doubts as to whether or not Jones would arrive on time as expected. But Jones made his way to Columbus and enrolled, and after the program formally welcomed him yesterday, any recruiting aficionado's worst case scenarios for the talented guard can be officially laid to rest.

Jones is a talented player that in lieu of his three-star 247Composite grade, some feel is actually underrated. The big man is of course raw, though, and with there still plenty of teaching to absorb at the college level before we're even sure what position he's best suited for, an early impact would be a surprise to say the least.

The 6'4/6'5-ish big man has great upper-body strength, and perhaps as soon as following a winter under Ohio State assistant athletic director for football sports performance, Mickey Marotti, and OSU dietician "Miss" Sarah Wick, we can expect that strong frame to be closer to ready for the rigors of playing the line at the collegiate level.

Arguably the biggest knock on his game is his explosiveness (or lack thereof) at the snap and at the point of attack, but given the magic OSU offensive line coach Ed Warinner's worked with other prospects in recent years, these are approaches that can be likely fine-tuned.

TL;DR: Don't expect to see Jones on the depth chart during his first year on a campus. A redshirt is more probable than not, even given the mass exodus on the o-line for the Buckeyes. He projects to a potentially very solid interior lineman, just likely not for a season or two.

The over 300-pound Jones was also the kicker for Glenville at times. Watch your back, Sean Nuernberger.