Land-Grant Holy Land takes a look at the top Ohio State recruiting headlines a week out from National Signing Day.

We're just one short week away from National Signing Day 2014 and the conclusion of the 2014 recruiting cycle. All of the hard work Urban Meyer and his staff put into this class will be finalized this next Wednesday as the recruits will be signing their National Letters of Intent.

There are a lot of questions that have yet to be answered regarding Ohio State's 2014 recruiting class and today we'll break down the biggest Buckeye related recruiting headlines heading into Urban Meyer's third National Signing Day as Ohio State's head coach.

News broke a couple of days ago that Ohio State offensive line commit Jamarco Jones will be taking an official visit to East Lansing this weekend for another look at Michigan State just days before signing day. Jones committed to the Buckeyes in June of 2013, but following the departure of Mike Vrabel, the Spartans jumped right back in the race for Jones.

Jones is still close with many of the Ohio State coaches and of course many of his fellow class of 2014 commits, which is one thing the Buckeyes have going for them. He also liked the school enough to commit there – and stay committed – for months. The bad news is the coach he was closest to was Mike Vrabel, who recruited the Chicago area for the Buckeyes. We know the situation there isn't going to change. One thing that we can say confidently is the Ohio State coaching staff will do everything humanly possible in order to make him comfortable and keep Jones committed.

Michigan State seems to have a lot of momentum here. They finished second for the 6'5, 290-pound tackle the first time around. Jones is close with many of Michigan State's commits as he participated with several of them in the popular "Core 6" developmental program. He's also close to their coaches. The Spartans will also be getting the last official and have all of their coaches available to make an in-home visit this week, which the Buckeyes don't as Urban Meyer and others were in Jamarco's house last week.

I'm sticking with my pick of Ohio State for the time being, but I'll probably change my pick if the Buckeye coaches are unable to talk Jones out of taking an official to East Lansing this weekend, which still remains a possibility. Jones hasn't spoken to reporters since news broke that he'd be visiting Michigan State this weekend, so predicting where he's going to end up is mostly a guessing game and checking in with people who have knowledge of Jones' recruitment. We'll be keeping you up to date on this situation as things progress over the next couple of days. 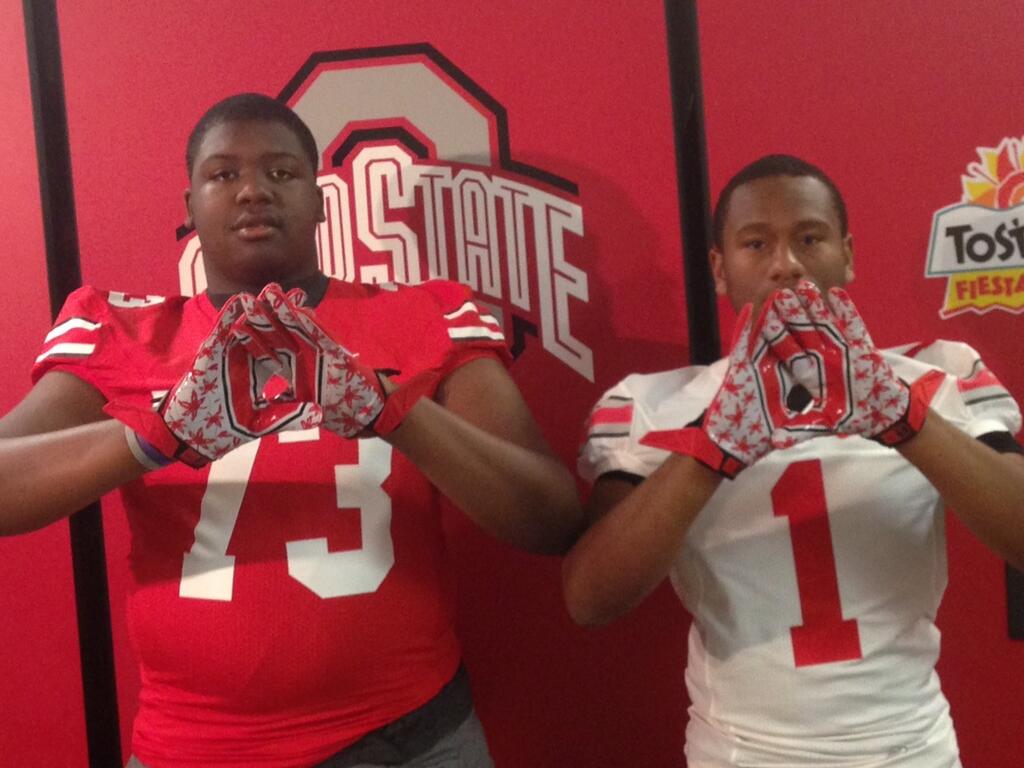 For a few days, it seemed like the standout defensive end would take his fifth and final official visit to LSU this weekend, but that changed after Ohio State head coach Urban Meyer visited with Malik and his family Monday and he decided he'd make his final official to Columbus this weekend. Ohio State also made McDowell's top four, which he tweeted Monday, along with Florida State, Michigan, and Michigan State. He later added that there was no order to his top four schools.

I think Michigan State is the favorite right now, with Florida State, Ohio State, and Michigan trailing the Spartans, but I've heard he's by no means a Michigan State "lock". The 2014 national champion Seminoles made a good impression on the defensive end when he took his official visit to Tallahassee a couple of weeks ago. As recently as then, I heard the Bucks were running second for McDowell, then Mike Vrabel left and things changed a little. However, now that the Buckeyes have talked him into visiting this weekend, they're very much back in this picture. Some recruits take officials solely because they want to take a "vacation", but I don't think any recruit would be taking a visit to Columbus this time of year, particularly if they weren't really serious about the Scarlet and Gray.

This weekend he and his family will have the chance to take an in-depth look at the Ohio State campus. They'll be able to spend time with Urban Meyer, new defensive line coach Larry Johnson, and cornerbacks coach Kerry Coombs, who handles Michigan recruits for the Buckeyes and has been by McDowell's high school on many occasions to check in with him. Then of course he'll be able to hang out with some of the current Ohio State players, fellow target David Njoku, and commit Malik Hooker if he makes his planned visit this weekend.

Even though Malik and his family haven't really gotten to know Larry Johnson too terribly much yet, I bet he'll make a very good impression on the McDowells as he has a reputation as a great recruiter, person, and football coach. Then he'll also get to spend a lot of time with Urban Meyer, who he's told me in the past is a coach he really likes. Finally, Kerry Coombs has done an awesome job recruiting the state of Michigan since arriving in Columbus and has a good relationship with McDowell as well.

As I mentioned before, if I had to make a pick right now, I'd go with the Spartans, but with the Seminoles making a good impression on him, his visit to Ohio State this weekend, and the Wolverines still very much in the picture, I changed my 247Sports Crystal Ball pick to "foggy" late last night.

When his trip to Columbus wraps up Sunday, I'll try to pull as much information at possible on his official visit. Stay tuned to Land-Grant Holy Land for updates on this big official visit.

Ohio State extended a scholarship offer to the 6'4, 225-pound wide receiver/tight end hybrid. He will be making his first ever visit to Columbus this weekend, with things sounding very good for the Bucks in this race right now.

Njoku's talent, paired with Marcus Baugh's struggles off the field, make him an important target for this recruiting class. If the Buckeyes lost Baugh, they would be left with only three tight ends in Jeff Heuerman, Nick Vannett, and J.T. Moore. All three are upperclassmen, making it more important that the Buckeyes bring in a guy that could play tight end in this class than it was a couple of weeks ago.

Ultimately, I think we'll see Njoku in the Scarlet and Gray next year. Miami is probably Ohio State's strongest competition in this race, followed by Connecticut and Temple who are trying to persuade him to stay closer to home to play his college football.

We can expect an official commitment from the elite athletic any time between when his official visit concludes and National Signing Day.

*2014 commit Malik Hooker is also expected on campus this weekend. He remains a solid OSU commit*

New name on the radar

With the status of Jamarco Jones unclear, the Ohio State coaching staff reached out to the 6'6, 285-pound offensive tackle, who is currently committed to Western Michigan and goes to the same school as Malik McDowell, who is one of this weekend's visitors.

You might ask why the Buckeyes would want someone committed to a lower-level school like Western Michigan. What you might not know is the standout tackle has received offers from Arkansas, Florida, Iowa, Nebraska, Oklahoma, and a couple of other bigger name schools. However, he has refused all of these offers because he wants to stay close to home for college.

Okorafor said he had a good conversation with Urban Meyer, saying, "He told me he likes my footwork and highlight tape," he said. "They want me to come for an official (visit) this weekend."

He later told me that he didn't hear back from Meyer and Ohio State about a potential scholarship offer and is not going to be taking any visits this weekend. While I could see this changing if the Buckeyes did come through with an offer, it's something we're going to place on the back-burner for the time being.

This is another situation we'll be monitoring, but you can rest assured the coaching staff has a contingency plan in case Jones does, in fact, defect from the class. I know they really want to take five offensive linemen in the 2014 class.

Although he took an official visit to Ohio State a couple of weeks ago and the Buckeyes are in his final two, there's a very slim chance he'll end up a Buckeye. I continue to hear that Johnson is leaning heavily towards the Seminoles. It looks like he'll be making his decision official on National Signing Day.

Crazier things have happened, but I'm pretty confident with my Florida State prediction for the 6'6, 315-pound offensive tackle.

The massive defensive tackle took an official visit to Ohio State a few weeks ago and the Buckeyes made his final three along with Florida State and Virginia Tech. However, it's very unlikely Nnadi will be a part of the "Dream '14", unless he shocks the world with his pick.

A couple of days ago, he tweeted that he has already made the decision, but is just waiting until signing day to make it official. If I had to make a prediction for the standout defensive tackle right now, I would pick the Hokies, but as we inch closer to National Signing Day, I'm starting to like the Seminoles' chances in this race. 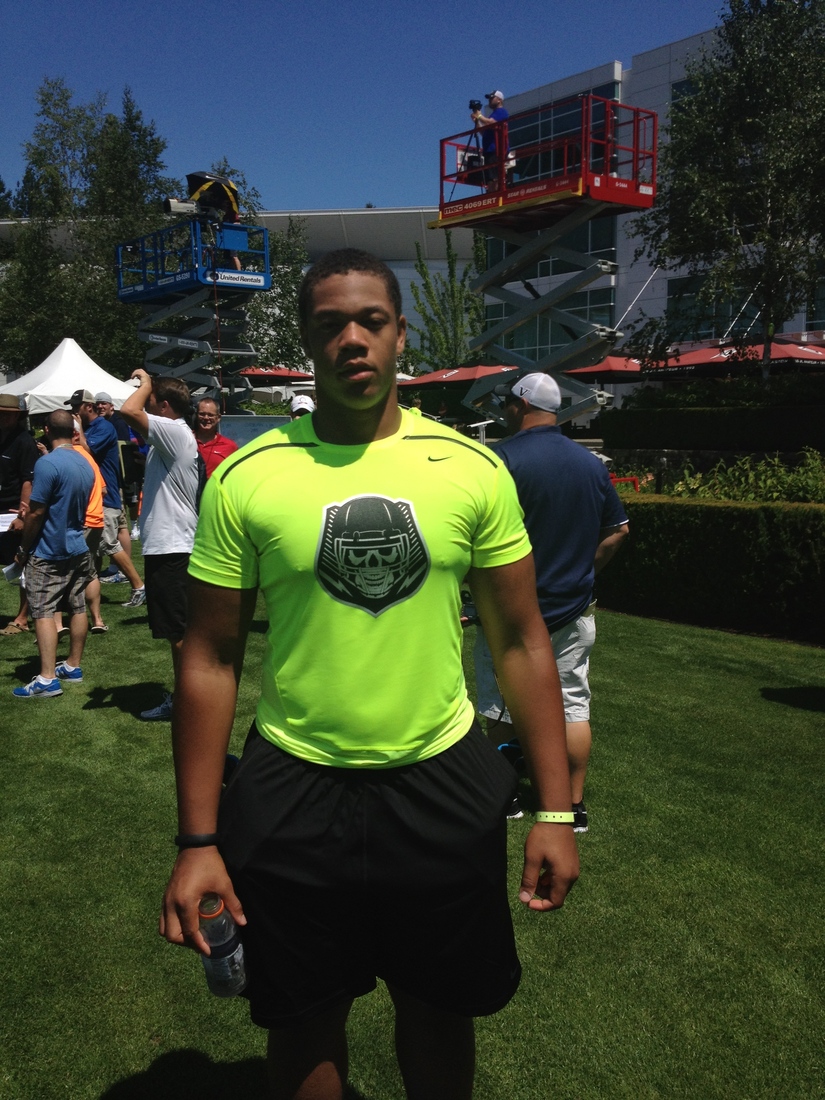 Just a short week ago, Knox stirred the pot a little, revealing he would be taking official visits to in-state Texas and UCLA. Well after visits from Urban Meyer, Ed Warinner, and Tom Herman, these visit plans were cancelled and it appears Knox is firmly committed to the Buckeyes.

I don't think there's much to see here, I'd be surprised if Knox took a visit this weekend and would be pretty shocked if he didn't end up as a Buckeye. However, we'll make sure to follow this situation on the off chance his commitment status changes.

Best of the rest

Don't think we're going to see anything between Ohio State and Cage at this point in his recruitment. I think he's going to end up a Michigan State Spartan, where he took an official visit last weekend. Cage is a good player, just not quite worth a scholarship offer in the opinion of the Ohio State coaching staff. He's visiting Notre Dame today and will visit Missouri this weekend, before making his decision.

A couple of months ago, I thought Rogers was going to be a Buckeye. However, it now appears he wants to stay close to home for college and rumors have swirled that he might not have the necessary grades to qualify. In any event, I think he's one of the most underrated prospects in the entire 2014 class.