Buckeye wideout Mike Thomas isn't too happy right now, and he isn't shy about letting the entire internet know about it.

Share All sharing options for: Ohio State WR Michael Thomas has a Twitter outburst for the ages

Buckeye wideout Mike Thomas isn't too happy right now, and he isn't shy about letting the entire internet know about it. You don't have to be John Madden to know that Ohio State's defense, particular the secondary, didn't play at a championship level over the past few games, especially against Clemson. You also don't need to be a rocket scientist to know that wideout play for the Buckeyes wasn't necessarily elite either. Ohio State wideout Mike Thomas seems to agree with both of those assessments, and he isn't shy about letting the internet know.

Thomas has gained the attention of many Buckeye fans for his excellent performances in back to back spring games, but his playing time in games over the last two seasons has been sparse.

If Evan Spencer's media banishment after saying Ohio State could "wipe the floor" with Alabama is any indication, it's fair to assume that Urban Meyer won't take too kindly to this sort of thing once he hears about it. With a few spots potentially open in the wideout rotation next season, Thomas has the potential to make a move, but this sort of thing probably won't help his case.

The tweets, from the @cantguardmike account (which Braxton Miller and others have interacted with) are below. Thomas is already deleting many of the tweets. 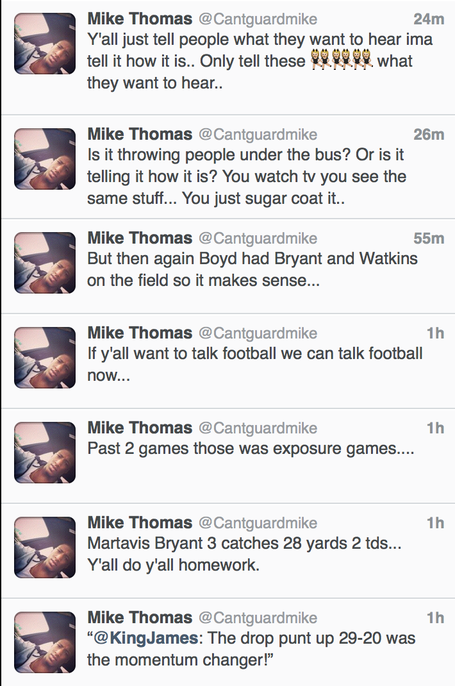 We weren't able to get a screen grab before the following was deleted, but had the embed code in our clipboard:

@2CBryant I put it to you like this Vonn Bell had more catches then a starter at receiver... And he only used 1 hand...

And finally, some evidence that is in fact Thomas' account: