The next step for Ohio State in trying to complete their journey to the Big Ten Championship Game comes on the road once again, this time at TCF Bank Stadium. The Buckeyes are coming off of a huge win in East Lansing last week against a top 10 Michigan State team and will be looking to carry that momentum into the rest of November, starting with a decent Minnesota team. Ohio State has now won 21 straight regular season games in the Big Ten conference, which breaks the old record that was held by the 2005-07 Ohio State teams.

In addition to securing their revenge on the Spartans from last year's disastrous Big Ten title bout, the Buckeyes have rolled through their schedule since the early season loss to Virginia Tech while averaging 46 points per game on the year. While there might be concern that Ohio State's players may relax after such a huge victory over Michigan State, head coach Urban Meyer is confident his team won't look past anyone remaining between them and Indianapolis.

Minnesota, meanwhile, enters Saturday's contest with a surprising 7-2 record on the season. One of those losses came to TCU, a team that is currently projected to take part in the inaugural College Football Playoff. The other, however, came to a horrid Illinois team at home. With a 4-1 record in the Big Ten, the Golden Gophers are hoping for Nebraska to fall to Wisconsin this Saturday and for an upset victory over Ohio State so they can find themselves tied for first place with two huge games remaining on their schedule.

The Gophers are led by head coach Jerry Kill, who has done a good job of turning Minnesota into a respectable team in the Big Ten but is still looking to take that next step. With the players he has recruited, you couldn't ask for much better and they've put themselves into position for a run at the Big Ten West division lead.

Home away from home? While TCF Bank Stadium might be a newer stadium (and one that Ohio State has only played in once before) the Buckeyes are plenty comfortable when playing on the road against Minnesota. Ohio State has a 20-4 record vs. Minnesota in games played in Minneapolis and have won the last 11 consecutive games there.  Ohio State holds an all-time advantage of 42 wins to only seven losses in the all-time series record as well, which only means good things for the Buckeyes. 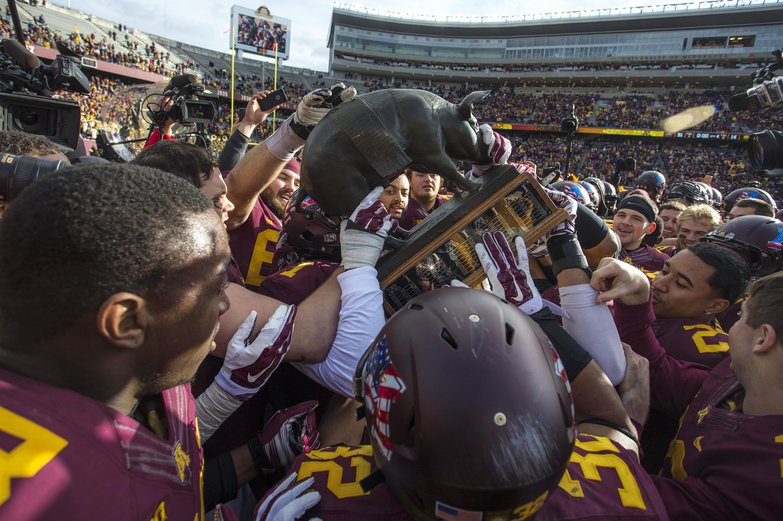 The Buckeyes are fresh off of the biggest win of the Urban Meyer era and are rewarded with another matchup with a Top 25 team. Unbelievably, Jerry Kill's Golden Gophers snuck into the College Football Playoff at 25th. The 7-2 Gophers have only two losses - one to the also-over achieving Horned Frogs and one to the genuinely terrible Fighting Illini. Even with that ugly second loss, the Golden Gophers are a legitimately good team statistically -- even the third-best team the Buckeyes have faced this season.

The Buckeyes not only rose in the CFP rankings, but also the F/+ ranking this week due to their efficient and explosive performance against the Spartans.

Officially, Ohio State has also won 23 of the last 24 games in this series, which is quite an impressive record to hold against any team. Ohio State graduate and former assistant coach Glen Mason directed his fifth Minnesota team – he coached the Golden Gophers for 10 years, through the 2006 season – to a 29-17 upset of the Buckeyes in Ohio Stadium during the 2001 season for the last Minnesota win in the series.

If the Golden Gophers want to upset Ohio State on Saturday, they'll also be fighting the history books as well as the players clad in scarlet and gray. The last time the Buckeyes visited TCF Bank Stadium was in 2010, where the Buckeyes cruised to a 52-10 victory behind the arm of Terrelle Pryor. Kickoff was in the low 40s that night, but Saturday's noon kickoff should be even colder.

Superiority. There's no question when it comes to the talent disparities between these two teams. Ohio State boasts some of the best talent in the country at multiple positions. Redshirt freshman quarterback J.T. Barrett is the Buckeyes' QB of the present as well as the future. Whether or not Braxton Miller is the starter next season, Barrett will be involved in someway, even if it means running a two-quarterback system of sorts.

This isn't to take anything away from Minnesota's players, however, as the Golden Gophers have plenty of talented skill players that they can go to. But Ohio State has the upper hand at almost every position on both sides of the ball, with names like Joey Bosa on the defensive line and a backfield that includes Ezekiel Eliott and Curtis Samuel.

The difference in talent should help the Buckeyes have an easier time against the Golden Gophers in general, but they will have to perform in pretty frigid conditions on Saturday. If everything goes according to plan, Ohio State should have the advantage both on the field with its talent and potentially with its coaching brain trust.

Remember, remember, all of November. Ohio State in general has been extremely fortunate to be one of the best teams annually in the month of November, but Urban Meyer only helps that argument with his impressive record as a head coach in the last month during the fall. Since 2003, the head coach has amassed a 36-3 record in November, spanning over several different teams that Meyer has coached, including Bowling Green, Utah, Florida, and now Ohio State.

Ohio State also has better than a 90 percent winning percentage under Urban Meyer. Only one school – Florida State – has a better winning percentage than Ohio State since the start of the 2012 season. Though the 2012 team was left out of the national championship conversation due to the sanctions from the 2010 scandal, it still went 12-0 and was followed up by yet another 12-0 regular season campaign.

24 straight victories was a special mark that Coach Meyer led his first two Ohio State teams to before falling short in the second season against Michigan State, when the Spartans knocked the Buckeyes out of a potential national championship game berth. Now Ohio State is once again in the conversation of a championship-type of season but needs to win the rest of their games impressively and hope for a little bit of luck around them.

Keeping it on the ground. Despite not being a sexy team, the Golden Gophers have relied on some excellent big plays from running back David Cobb. Cobb has 227 carries for 1,205 yards and eight touchdowns this season, while averaging 5.3 yards per carry. That's an impressive number, considering the Gophers have given him the ball so many times (compared to Ezekiel Elliott, who has 149 carries this season and is averaging 5.8 yards per carry). To sustain that kind of success is nothing to scoff at.

The Buckeyes will also have to keep an eye on quarterback Mitch Leidner, who has 69 carries for 241 yards but also has added 6 touchdowns on the ground this season. Following a big 51-14 win over Iowa, the Golden Gophers have momentum and are looking to carry that into the game against Ohio State this Saturday. With a pumped up crowd and freezing weather, it could be a long day through the air, but the Gophers are well prepared for a game on the ground.

First impressions. This game marks the first time that head coaches Urban Meyer and Jerry Kill have met on the same field. Minnesota’s Jerry Kill will represent the 96th different head coach that Urban Meyer has game planned against. Meyer is 80-15 in first-time coaching matchups, including one of those wins coming against James Franklin earlier this season on the road at Penn State. Ohio State won that game 31-24 in double overtime on the shoulders of quarterback J.T. Barrett, but the Nittany Lions came close to pulling off the upset.

Coach Kill will try and have his team prepared for the same task but will be looking to come out victorious. Kill wants his program to take the next step and a win over Big Ten behemoth Ohio State would help him and the program do just that.

So far this season, Minnesota's defense is ranked 23rd in the country overall in points against, allowing 21.3 points per game. The Gophers defense will be facing perhaps their toughest test of the season, as Ohio State's offense comes in averaging over 45 points per game led by J.T. Barrett at quarterback and Ezekiel Elliott on the ground. Both have blossomed into extremely tough opponents that a team must game plan around, but they should be quite game.

A week after F/+ predicted a loss to Michigan State, Ohio State finds themselves back on the winning side of its predictions.

Ohio State boasts one of the best offenses in the Big Ten and has been the most improved team in the country since their loss to Virginia Tech in the second game of the season. While they ride J.T. Barrett and Urban Meyer's record in November, the Buckeyes also have some of the best momentum amongst any of the top teams in the country.

Fans should be treated to a chilly treat on an early Saturday afternoon. Minnesota has historically struggled against Ohio State both on the road and at home, but the teams haven't met in four years, and will be facing off against each other two of the next four years with both coming in Ohio Stadium (Nov. 7 next season and Nov. 13 in 2018). Jerry Kill will do everything in his power to make this home date count accordingly. 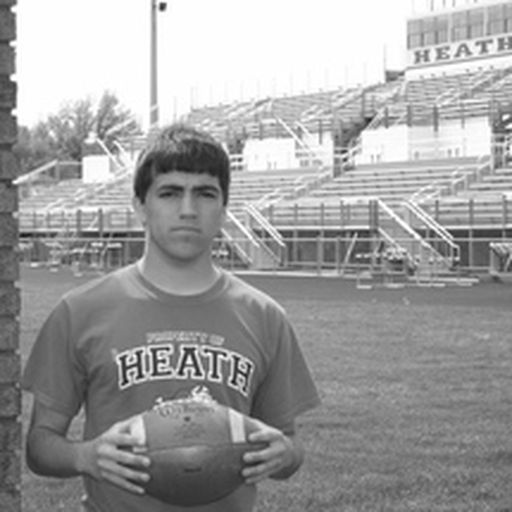 Born and raised in the Buckeye state, Ian began writing in 2009. Since the summer of 2012, Ian has been writing for Land-Grant Holy Land.

In his spare time he enjoys rooting for his favorite (non-Ohio State) teams, which include the Cincinnati Reds, the Cincinnati Bengals, the Cleveland Cavaliers, and the Columbus Blue Jackets.