After disposing of two ranked Big Ten teams on the road (Michigan State and Minnesota) with varying degrees of ease, Ohio State brings its act back to Columbus to finish the regular season. The first of two home games comes against an Indiana team that on paper should give the Buckeyes very little resistance. The Hoosiers (3-7) have yet to pick up a Big Ten victory in 2014 due to their porous defense, allowing at least 34 points in all but one of their losses.

Indiana has not won since Oct. 4 against a lowly North Texas team. Meanwhile, Ohio State is one of the hottest teams in the country and its slowly creeping its way up the College Football Playoff Rankings. Redshirt freshman quarterback J.T. Barrett's play has been nothing less than incredible considering where he was as a pocket passer against Virginia Tech in an early season loss Sept. 6.

Coach Urban Meyer has done a great job of surrounding Barrett with the tools he needs to succeed on the field and stay within his comfort zone. Barrett's school-record 38 total touchdowns breaks Braxton Miller's previous record of 36, which was set just a season ago.

The Buckeyes' fifth-ranked scoring offense will be tough to stop in the cold November air in Columbus. Barrett's duel threat abilities have made Ohio State's ground game impeccable, especially with multiple backfield options to throw at the opponent. The 2014 Buckeyes are closer to what Meyer envisioned when he first came to Ohio State. Indiana is going to have to pressure Barrett because he is in such a zone that he'll find the open man with any extended time in the pocket.

Mr. Coleman. Tevin Coleman's season has been the one highlight for Indiana in 2014. Coleman is averaging 7.8 yards per carry and with a strong finish to the year could cap a 2,000 yard season. If the Hoosiers have a chance Saturday, it'll be slowing the game down and running the ball. Keeping the ball out of Barrett's hands seems like the smartest thing you can against Ohio State these days. 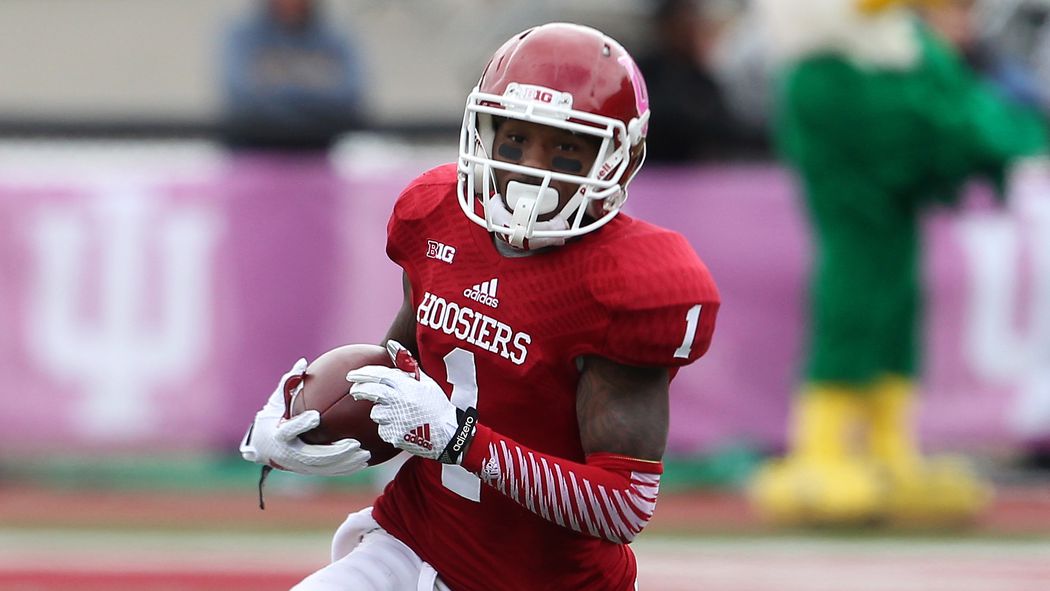 Ohio State's next opponent has a starting running back that rushed for over 300 yards last weekend and is second in the FBS in total rushing yards. The team overall is 11th in rushing yards per game. They also beat the current SEC East champion, Missouri.

The Buckeyes not only rose in the CFP rankings, but also the F/+ ranking this week due to their efficient and explosive performance against the Spartans.

While that's seemingly a pretty darn good resume, the Indiana Hoosiers are 3-7 and 0-6 in the Big Ten, and Tevin Coleman's 300 yard rushing effort came in a 22-point loss. Just about the only thing that's gone right this year for Kevin Wilson is his running game. Indiana was known as a passing team in previous years, but a shoulder injury to Nate Sudfeld derailed the offense (so, kudos to the offensive staff for getting Coleman some running room despite alternating two freshmen at quarterback.

In the twelve statistical comparisons below, the Buckeyes have the advantage in all but three categories. Two of those three give the Hoosiers an advantage: Offensive Rushing S&P+ (rushing efficiency) and Adjusted Line Yards. The blueprint for a Hoosier upset is there, but it's very improbable (the Vegas line has moved to Ohio State -34.5) -- run Tevin Coleman and hope for big plays against the only chink in the Buckeye defense's armor.

Coleman had seven consecutive 100-yard games to start the season and in his most previous performance against Rutgers, he was the whole team. Coleman rushed for 307 yards on 32 carries in Indiana's 45-23 loss in Piscataway, N.J. Coleman also has shown solid production catch the ball out of the backfield this season.

Secondary troubles. Ohio State's defense has been much improved in 2014 under co-defensive coordinator Chris Ash. The Buckeyes have been a solid bend-but-don't-break unit, allowing 22.0 points per game and showing vast improvement in the secondary. Redshirt freshman Eli Apple has been often picked on this season, but for the most part has risen to the occasion.

The concerns comes from lingering effects from games like Cincinnati, where the Buckeyes were victimized for three 70-plus yard touchdown passes. The Ohio State secondary is getting better, but the stigma is still there.

Even with third string quarterback Zander Diamont starting for the Hoosiers, there is a chance the spread offense could cause Ohio State some problems.

Nothing to lose. They say the scariest teams are the ones who have nothing on the line and can play freely. Indiana fits that description to a tee. After upsetting Missouri early in the season, Indiana's luck ran out when they lost quarterback Nate Sudfeld to shoulder surgery.

The Hoosiers will come into Ohio Stadium expected to get stomped and they can run their offense freely. Indiana is 11th in the country in the rushing, so they can move the ball if Ohio State's defense doesn't come to play.

Ground and pound. Barrett has been incredibly efficient through the air, but the team's real strength is its ability to pound the ball on the ground. Much like the 2013 Buckeyes, the offense starts at the line of scrimmage. Despite its poor performance early in the season, Ohio State's offensive line has proved to be a real strength. The Buckeyes are rushing for 263.1 yards per game, and -- unlike a season ago -- the wealth is being spread around.

One week it might be Ezekiel Elliott shouldering the load. Another week it might be freshman Curtis Samuel popping off for two touchdowns like he did against Illinois. The Ohio State running game allows everything else to open up for the offense. And Meyer has said the addition of the horizontal run game makes the offense operate at its highest level.

With the Buckeyes able to set the table on the ground, it will be tough for Indiana to get its pass rushers up field to get any type of pressure on Barrett. And if the Hoosiers commit too much to the weapons around Barrett, he's liable to break into the open field like he did in the snow at Minnesota. If the Buckeyes establish the line of scrimmage early Saturday, there will not be much Indiana can do to slow Ohio State down.

The streak. Ohio State is simply in the zone right now as a unit. Its Big Ten record 22-game conference winning streak is enough to tell the story of dominance since Meyer has taken the helm. The Buckeyes are the class of the Big Ten and teams like Indiana often get rolled over, especially in Ohio Stadium.

The crowd may be slightly reserved due to the freezing temperatures and a foreseen blowout, but the Buckeyes don't lose November Big Ten home games very often. The Buckeyes have too much to play for to have a letdown against a winless team.

With Michigan looming, the Buckeyes are focused on a Big Ten championship opportunity in December. Despite Meyer's 33-3 record as Buckeye head coach, Ohio State still has not been able to crack through and win the conference. The drought has left a lot to be desired, but this season seems to be the year everyone is supremely focused on the goal. And if the first goal is met, the goal of a national championship might not be out of the question either.

Talent gap. At the end of the day, the talent disparity in this matchup will be too much for the Hoosiers to handle. Ohio State is putting five-star athletes and nearly every position to surround J.T. Barrett. Dontre Wilson's broken leg obviously puts a damper on the team, but the offense is not lacking.

With Jalin Marshall coming into his own at the H-back position and Michael Thomas turning into a legit weapon at receiver, the Hoosiers' secondary will be tested. Marshall's five catches for 95 yards and a touchdown against Minnesota opened up the field and allowed the downhill running game to prosper.

The Hoosiers offense will likely be able to move the ball against Ohio State's defense, but it'll be too few and far between.

The F/+ prediction shows one of the larger margins of victory of the season. If numbers don't lie, the Buckeyes should roll in this one by at least four or five touchdowns. Barrett will continue to add to his school record touchdown mark and possibly set the pace for one of the best seasons an Ohio State quarterback has ever had.

The mismatches are pretty evident across the board. Both the offensive and defensive lines should be dominated by Ohio State. It's hard to make a case for Indiana scoring in the double digits unless the Buckeyes decide to rest starters early.

The cold November air might slow the Buckeye attack a little, but there's not much Indiana can do with the explosiveness Ohio State's offense can bring. Meyer's empire continues to grow in Columbus and its only a matter of time until the Buckeyes break through to play for something more.