Land-Grant Holy land goes in-depth with defensive end signee Darius Slade on how he ended up being a Buckeye.

Share All sharing options for: Darius Slade: The road to Ohio State

On National Signing Day the Buckeyes received a surprise signature from Montclair (NJ) defensive end Darius Slade, who had be committed to Michigan State before flipping to the Buckeyes.

Slade hadn't been on Ohio State's Columbus campus prior to announcing for the Buckeyes on signing day. He finally made the trip to Columbus this past weekend, where he really enjoyed his whole time checking out everything the Ohio State football program had to offer.

"We got there Friday, checked into the hotel. After that we went out and took tours, then we got the chance to break off and meet with all of the coaches. We pretty much took a big tour around campus and went on a few more tours. Then  Friday night me and my host, Tyquan Lewis, went out to dinner with coach (Larry) Johnson, coach (Ed) Warinner, and coach Warinner's wife, a few other people in the program, and my family. It was a great dinner and we had a lot of fun."

Slade continued, after that, me and Tyquan just kicked backed with a couple of our teammates and that was pretty much it for Friday," Slade said. "Saturday we got up pretty early, went out to breakfast with the coaches. Then we picked back up on more tours and sat down with the academic support. (Ohio State) has very good academic support. I was very excited to know that I'd be taken care of and I won't be a player who will be slipping through the cracks academically, I'll be taken care of, I was really excited about that."

"After the tours, we went out to lunch with coach Johnson, coach Gillum, and Tyquan again. Afterwards we went back to our hotel room before heading to the basketball game. The basketball game was a great experience, great atmosphere, and was very exciting. We went out there and got the W over Minnesota. It was a very good game. Saturday night we went out with some more players. Each night I got to hang out with all kinds of different players and last night I hung out with pretty much all of the 2014 guys (who are already enrolled), Noah Spence, Trey Johnson, and that was pretty much it."

While Slade enjoyed pretty much all of his time in Columbus. His favorite part was getting to hang out with his future Buckeye teammates.

"I would have to say probably just interacting with the players and getting a feel for them," Slade continued. "I've sat down with coach Johnson before and I know what he's all about, I'm pretty familiar with the coaching staff, which is one of the best coaching staffs in college football. Just getting to the chance to really sit down with some of my future teammates and the guys there in my class. They're all great guys, some funny guys. I look forward to getting back out there and playing alongside them for the next four to five years. It's going to be great."

"We talked about where I fit in on the defense and the defensive line scheme. A lot of the coaches applaud me for taking that big, huge jump of faith, without really only knowing the coaches and not knowing much about the players, signing somewhere I hadn't been. A lot of the coaches really thought that was a brave decision I made made," Slade told Land-Grant Holy Land. "Coach Johnson I've know for awhile and I definitely want to meet coach Meyer. Sitting down with coach Johnson and my family and talking him, it was a different visit, but my mom, dad, and sibling already knew if real well, so we had a comfortable, warm, fun time really."

During his time with Johnson, the 6'5, 240-pound defensive end was told how the Buckeyes wanted to use them in their future defenses.

"Definitely as a speedy-type, pass rushing defensive end. They can use me in different packages, sometime I'll drop back (into coverage) which is something I've done a few times in my career in high school in New Jersey," he said. "I'm a lean, tall athletic guy, who is definitely going to try and bring a lot to the table. Coach Johnson would like to see my at about 255 pounds coming in, right now I'm at about 240, I have some time, but there are a lot of different things I need to work on. Speed and a bunch of different drills and tape to watch so I can come in prepared."

When it was all said and done and he departed home for New Jersey, Slade gave his visit a perfect score.

"On a one to ten scale, I would definitely have to give it a ten," he stated. "The main thing I wanted to do was hang out with my teammates and I got to hang out with a lot of them. I had tons and tons of fun and I look forward to maybe graduating a little early and getting out there." 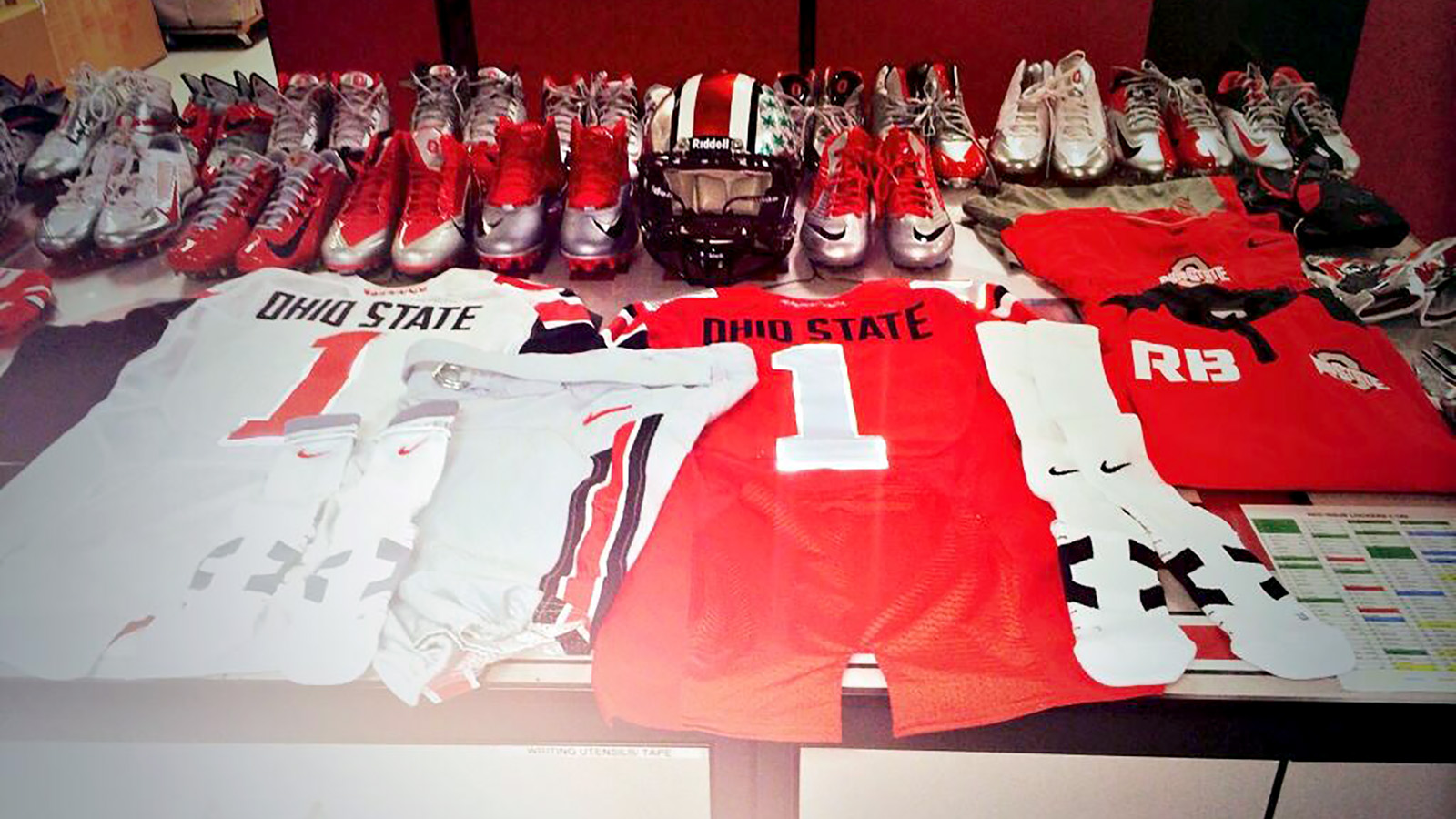 One little known thing about Slade is former Penn State All-American defensive end and current Miami Dolphin Jared Odrick is his cousin. Slade was able to learn quite a bit from his cousin.

"Honestly, Jared definitely set the bar for all of us. His little brother Julian is at Rutgers playing defensive end, so it is definitely train track going down. We're just blessed to have some who's already there to give us advice on the adversity that Jared has already been through. Knowing Jared could do it and fight through all of the adversity, kind of gave me something to look up to going through all of my high school career, trying to be recruited, and stuff like that," Slade said. "He's not only a great football player, but he's a great cousin and a great coach. I listened to everything he had to say about things on and off the field, the techniques he uses. He has helped me a lot throughout the recruiting process."

Before flipping to the Spartans and then eventually ending up with the Buckeyes, Slade was committed to play for Big Ten foe Nebraska.

"I committed to Nebraska the week after the state championship game. At the time I was so pressured with the process and I was tired of the whole recruiting process and didn't give myself enough time to think about committing. Nebraska is a great school and I think it's a place I could've gone and succeeded, but I just wanted to end my process. I thought by doing that I could just go to a school and get out the entire process," Slade said. "Once I went to an All-American game and I noticed what it was like to be so far away from home, I got some time to think to myself and when I came from the game, I knew I didn't want to be that far away from home and wanted some time to think about my decision. I got back and officially decommitted from Nebraska."

After decommitting from the Cornhuskers, he quickly gave his pledge to Big Ten Champion Michigan State because he heart was with the Spartans at the time.

"My heart was still with Michigan State. Ohio State had been recruiting me pretty much since my junior year. Not many people know about that. They recruited me, but they wanted me to come out to their camp and I had already made a decision that I wasn't going to go to any camps and just wanted to focus on getting better and focusing on my senior year, so I didn't go to the camp. That kind of shut a lot of things down when it came to opportunities for me at Ohio State," he continued.

Despite feeling comfortable at Michigan State, Slade was having a hard time turning down Larry Johnson for a second time as he also turned Johnson down at Penn State.

"A lot of people ask me why I didn't go to Penn State. Well my cousin Jared went to Penn State and I knew from the start that wanted to create my own path and go my own route. Jared was a great player, but I just wanted it go down my own path," Slade said. "It was very difficult turning Larry Johnson down at Penn State. When he went to Ohio State, I knew it was going to be a tough decision and I wanted to at least get out there for a visit to see what it was all about."

Finally on National Signing Day, the standout defensive linemen made the decision he wouldn't be signing until he took a visit to Ohio State and before the day was over, he had signed his national level of intent and was officially a part of the Ohio State football program.

"The race started to get tight and come signing day I knew for a fact I wasn't going to sign a letter of intent before I got out to the Ohio State campus," Slade stated. "Talking to the Ohio State coaching staff a lot, I realized it was the staff I really wanted to be coached by. Talking to a bunch of different commits and different players there now, I decided I was ready and willing to sign. I signed my letter of intent and planned my official visit accordingly. It's a process that definitely could have been taken care of in a better way, but I don't regret going to Ohio State. It's definitely the best place for me. I wish I would've just committed there a long time ago, instead of having to go through a bunch of different heartbreaks with coaches and stuff like that. I wish it was over a long time ago, but it's a process and I'm excited to be a Buckeye and I'm just ready to work."

Here's what Ohio State head coach Urban Meyer had to say about Slade after the staff received his national letter of intent:

Darius Slade: I didn't know much about him or who he was. That's Larry Johnson contact from I guess they've known each other for years and years. Jared Odrick who Larry Johnson coached at Penn State, there's a nephew or something. I think Larry would be a good guy to talk to.

I watched film on him. Do we want to take this kid, I'm thinking, sure, I really don't know much about him. That's a Larry Johnsonism.

Slade has good size for a pass-rushing defensive end at 6'5, 238 lbs. He explodes off of the line of scrimmage but he needs to keep his pad level lower on contact. Slade will be a redshirt candidate with definite pass-rushing upside after getting the proper coaching and technique down from expert line coach Larry Johnson.

If you haven't seen the future Buckeye in action, make sure to check out his highlights below: