Now that National Signing Day 2014 has come and gone, it's time to turn our full attention to the 2015 recruiting cycle – and even to some extent, the 2016 recruiting cycle. The 2015 class is going to be a big one for the Buckeyes as the scholarship limits are set to expire and a big class is graduating following the 2014 football season.

Three main components will be taking into account when ranking the 15 prospects in order: Player's overall talent, interest in Ohio State/probability the Buckeyes land the player, and how much of a need the player is for the Buckeyes.

While the Buckeyes won't be desperate for help at defensive end/linebacker in the coming class, they'll always be looking to add the elite ones. DeBerry could play either linebacker or defensive end at the next level and will come to college already possessing solid pass rushing and tackling skills. He could fit in at the "Viper" role in Ohio State's defense.

It's unclear what the Buckeyes' chances are at landing DeBerry right now. He holds 50 offers and hasn't even started the process of narrowing his list. We should know a lot more about his interest in Ohio State following his unofficial visit scheduled for the weekend of Feb. 15.

While guys like Parris Campbell and Curtis Samuel might get a couple of carries, there's little chance either fits in as a full-time running back in 2014. Ohio State didn't take a pure running back in yesterday's class, so that's something they will look to address in this class. Patrick is a fast and powerful runner who could also play some wide receiver, but I envision him being a running back as things currently stand.

Ohio State scored a visit from the elite athlete when he came up to Columbus to watch the Buckeyes dominate Penn State last October. It will be very difficult to pull him from his home state of Florida, let alone the South, but Michigan and Ohio State have the best chance of pulling him from the warm weather. 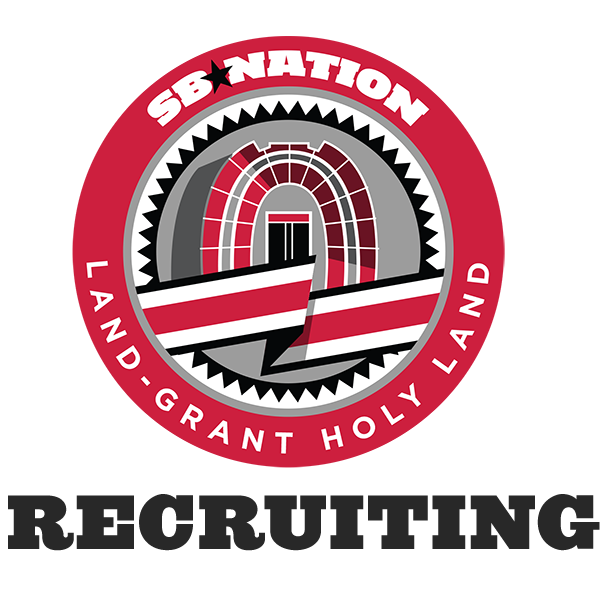 The Lone Star State standout is a guy who can excel on the outside and has excellent speed to go along with the ability to make plays on the outside. Ohio State has plenty of slot receivers, but I think it's very important they add a few wide receivers who can make plays outside the numbers.

It will be really tough to pull Lodge from his home state, however. Ohio State made his top eight a month or so ago, but I think Baylor is the odds-on favorite to land him right now, with a handful of other Texas schools not far behind. After the host of in-state teams, I'd slot the Buckeyes next. It's going to be tough, but never say never to Mark Pantoni and Urban Meyer.

It's very important to add at least a few quality offensive linemen in every recruiting class. The New Jersey native could play either tackle or guard at the college level, with guard seeming the most likely right now. It's pretty clear that he's one of Ohio State's top targets as the staff has frequented his school during open contact periods.

A few weeks ago, Gonzalez named the Buckeyes his early leader, and he recently identified Penn State as his number two immediately after they extended him a scholarship offer. From talking to him, I get the vibe the Buckeyes hold a sizable lead right now, but the Nittany Lions are definitely a school to watch out for. His recruitment is nowhere close to over as he says he's not going to decide until Signing Day 2015.

I know for a fact the Ohio State coaching staff would like to grab two guys with the potential to play quarterback in the class. Torrance Gibson is the "big fish", but they want to add a "pure" quarterback in addition to him. Nunez isn't a burner, but can make people miss with his legs if necessary. More importantly, he is pretty polished as a passer.

It came down to Brandon Wimbush and Nunez for this spot, but I just feel Nunez is a little better on the field. Further, the Buckeyes have a better chance of securing a commitment from him as well as getting that commitment early. From talking to him, I know he's very interested in OSU, and personally think the Buckeyes are the favorite to land him at this point in time.

Like I mentioned with Patrick, Ohio State needs to add a pure running back in this class as they didn't add one this past cycle. Former Michigan commit Damien Harris is probably the top guy on their recruiting board right now. The 5'11, 205-pound tailback has great size to go along with legit 4.4 speed.

Michigan is likely still the leader for Harris, but the Buckeyes are very much in it. In-state Kentucky remains a small, next best threat to both of the Big Ten schools. I learned that Harris was on the phone with Urban Meyer the day he decommitted from the Wolverines, due partly to the departure of offensive coordinator Al Borges. It will be huge once the Buckeyes get the standout running back on campus.

The last player the Buckeyes pulled from St. Thomas Aquinas, Joey Bosa, sure worked out well, and the Bucks will look to hit another home run at the prestigious high school with the massive 6'5, 195-pound wide receiver. Ohio State has landed plenty of speed/slot receivers, but they covet a big, physical wideout like Peete in order to make big plays on the outside.

Peete named a top five of Alabama, Florida State, LSU, Miami and Ohio State a couple of weeks ago and added that the Orange Bowl practice he witnessed in person really helped the Buckeyes in his recruitment. I like the position the Buckeyes are in right now, but it's really important to get him on campus, which he said he would be doing this spring or summer. This would be a huge addition for the Scarlet and Gray. 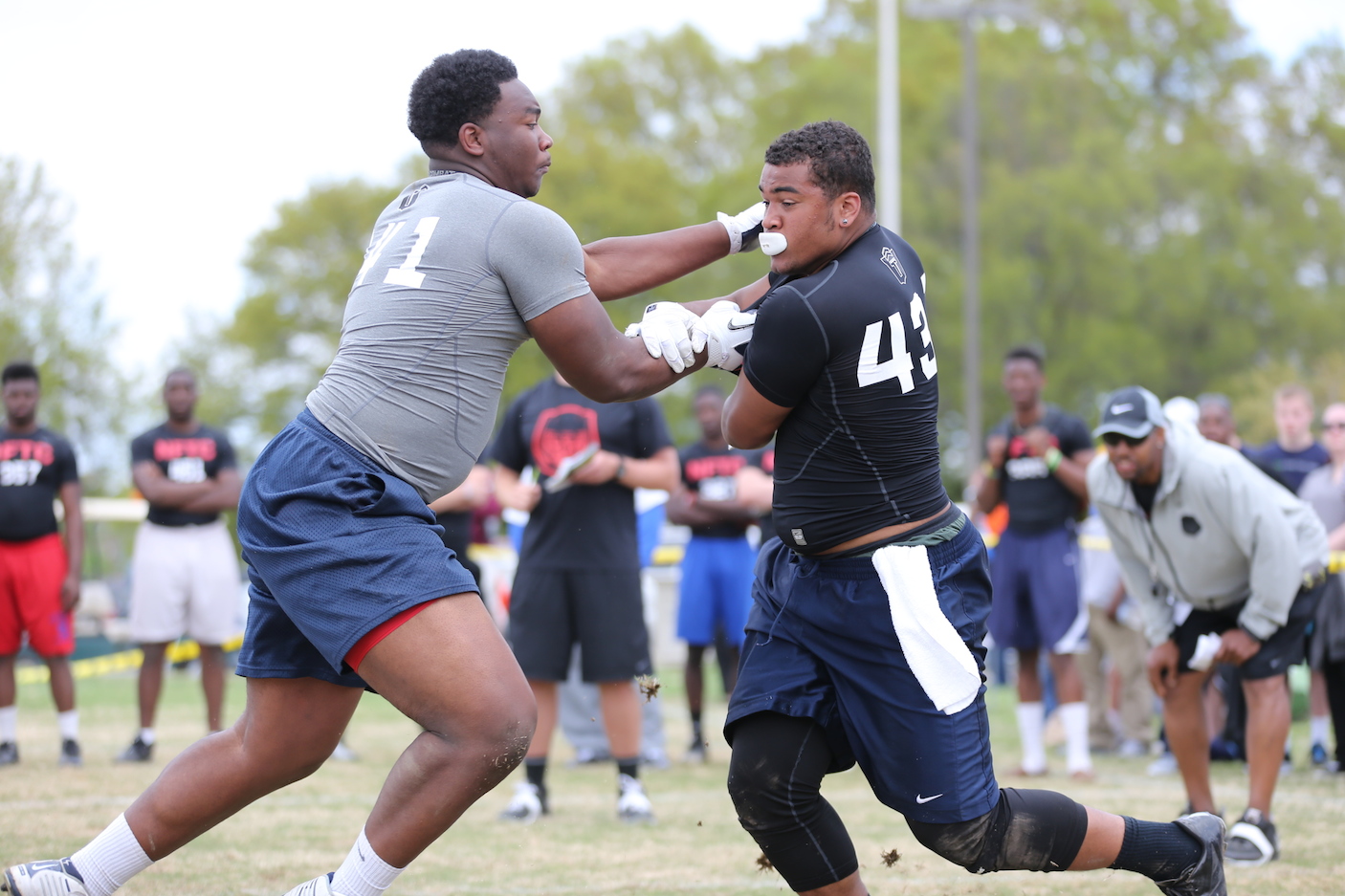 I think Ohio State is in a pretty good spot here. Richmond has been on campus a couple of times and has spoken highly of the Buckeyes following the visits. They will have to hold off in-state Tennessee, Alabama, Ole Miss, and other top schools from the South in order to secure a commitment from the standout tackle.

Urban Meyer has done a great job of bringing in ultra-talented defensive backs during his tenure in Columbus, especially in the 2013 and 2014 recruiting classes. He will look to do the same in this class with the lockdown corner from Jersey City being the top defensive back target on their board.

Ohio State is recruiting Fitzpatrick harder – or just as hard – as anyone in the 2015 class. He recently took an unofficial visit to Tuscaloosa to check out the Crimson Tide. I think they might lead right now, but Ohio State definitely has a legitimate shot at landing him.

After failing to land a tight end in the 2014 class, it's one of the top priorities in the 2015 class. I think they staff would love to take two in this class, with Clark being their top target early on. The 6'6, 250-pounder is already an excellent blocker, and has the ability to develop into a very good pass catcher once he reaches the college level.

Ohio State was Clark's early leader, but I think the lead shifted to Georgia after he took an unofficial visit to Athens last weekend. That said, I wouldn't be the least bit surprised to see the Buckeyes surge back into the lead following a visit to Columbus, currently slated for March 21. Clark plans on making his college decision sometime before the start of his senior season.

Urban Meyer and company would love to add another elite defensive end recruit to expand their depth along the line, and Beckner appears to be the most talented player available at the position. Checking in as the No. 1 defensive end in the 247Sports Composite rankings, the Bucks could do a whole lot worse than securing the services of the East St Louis, IL product.

Beckner has been very quiet about his recruitment, and really doesn't seem to be very into the process right now. He'll probably take visits over the summer and fall before ultimately making a decision. The only two big things I've heard about him so far is that he really likes USC and is high on the Buckeyes, too.

Ohio State wasn't able to land an elite interior defensive lineman in the 2014 recruiting class, but they'll look to land one in 2015 in massive defensive tackle Tim Settle. The 6'3 305-pound defensive tackle is arguably the Buckeyes' top target on that front, and will be force inside wherever he decides to play his college.

Settle isn't anywhere near making his college decision and hasn't been focusing too much on his recruitment, but the Buckeyes are in a solid position early. They'll face stiff competition from the likes of Alabama, North Carolina, Virginia, Virginia Tech, and a couple of other top programs.

One of the priorities for the Buckeyes is to keep the state of Ohio's top players in state to play their college football. Hilliard, who many consider to be the state's best, is one of the most outstanding linebackers in the 2015 class as a whole. While the Buckeyes landed a good crop of linebackers in this past year's recruiting class, they'll never turn down a chance to add the best of the best.

It's tough to tell where the Buckeyes stand in his recruitment right now. I think they're in a solid position, but they will face a lot of competition from Michigan and Iowa, where his older brother CJ, a running back, will be playing football this coming fall.

Just as I mentioned with Hilliard, it's extremely important to keep the best talent in the state of Ohio in state. Baker is the top player and is currently being recruited to play running back at the college level. Depending on how much he grows, he could also end up playing linebacker. We should have more clarity on which position he'll be as we get closer to National Signing Day 2015.

Ohio State is sitting pretty for the super athlete right now. It's not really clear when he could be committing, but the Buckeyes are pretty heavy favorites in this race right now. The top competition for Urban Meyer and the Buckeyes is probably Penn State, who he grew up recruiting for. Fortunately for the Buckeyes, he's not as familiar with their new coaching staff as he was with Bill O'Brien's.

I think the most important thing for the Buckeyes in the 2015 class is to get a top-level quarterback. 6'4, 200-pound Torrance Gibson is the coaching staff's number one guy. He has the size, speed, and arm needed to succeed in Urban Meyer's spread offense and if he doesn't work out behind center for whatever reason, he could move outside to receiver and be just as good, if not better. SB Nation Recruiting's Bud Elliott is one of those who feels that Gibson's long-term best pro prospects would be at the wide receiver position.

Right now, the Buckeyes are in a very good position with Gibson, but his recruitment is far from being over. He still hasn't been on campus for a visit yet, but I bet that changes this spring or summer. Rest assured that Gibson is high on the Scarlet and Gray early.