Let's kick of the Big Ten Tournament of Mysteries today, shall we?

The Big Ten Tournament finally kicks off Thursday, after waiting and watching as seemingly every mid major number one seed fell in their own conference tournament. While the top four seeds aren't in action, that doesn't mean that there won't be some exciting #B1G basketball in our near futures today! Let's take a look at the bracket and schedule. 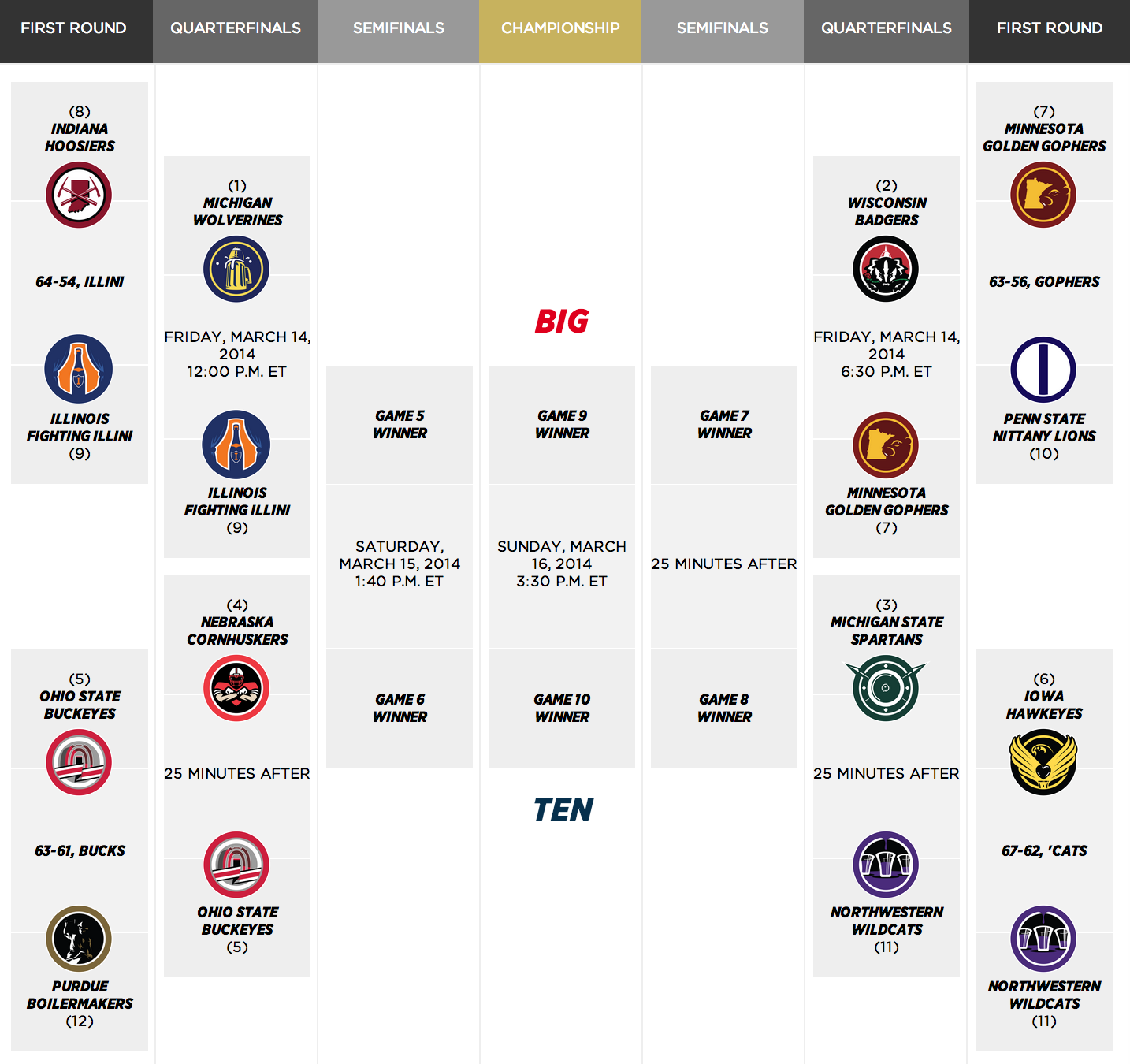 So on the left side of the bracket, we get to see two games with four somewhat disappointing teams in their own way. Then on the right side, we get two teams in must win situations (and don't mistake it, Iowa is in a must-win situation right now to stop the bleeding even though they're certainly tournament bound). Tomorrow should be a rip-roaring day of semi-respectable #B1G basketball.

Reasons to watch: Because it could be future lottery pick Noah Vonleh's last game in a Hoosier jersey if the Hoosiers lose and aren't selected for the NIT. Because Rayvonte Rice for Illinois is one of the most unique players in the country as a 6'4, 240 pound power guard (yes I said that right, he's created a new position. Power Guard). Because Tracy Abrams against Yogi Ferrell will lead to an incredible amount of over-dribbling due to so few other players on their teams being able to create offense for themselves.

Fun with numbers: Let's talk more about how bad this game is going to be aesthetically. The lack of creation outside of Ferrell is so prevalent for Indiana that they had a .75 assist-to-turnover ratio in conference games, which was dead last in the Big Ten. They're turning the ball over on more than one-fifth of their possessions, which is normally not ideal. However, in Illinois, they get to play a team that was even more inept at passing the ball, assisting on only 43% of their made baskets. If you like nonsensical dribbling on the perimeter, this is the game for you. Add in the fact that this is the 12 o'clock game, this one is going to be UGLY for the rest of us non-Jarrett Jack fans.

Players to watch: Vonleh is one of the better rebounders in the country, and wisdom suggests that Nnanna Egwu and Jon Ekey aren't going to be able to stop him on the boards. Also, Ferrell was named second team All-Big Ten for carrying/dragging this Indiana offense to respectability by improving his outside shot and continually breaking down the defense in the paint. For Illinois, Rice is incredibly fun to watch as long as he isn't shooting from distance. To do that, they have Ekey, who beat Iowa with his last second three pointer last Saturday. The two transfers have probably been Illinois' best players this season, which says a lot about their season.

Prediction: Indiana takes a close battle of ineptitude as everyone tries to wake up and get rolling early. We'll go with 60-56 as an arbitrary final score.

Reasons to watch: You're on an Ohio State website reading this. I feel reasonably sure you have some sort of allegiance to the Buckeyes.

Fun with numbers: This is a battle of defenses at the opposite ends of the Big Ten spectrum. Ohio State's adjusted defense was first in conference games at 96.2, per Ken Pomeroy. This was three points better than second place Nebraska. Purdue's adjusted defense was 11 points worse at 107.6, second to last in the conference. The Boilermakers also forced turnovers at the worst rate in conference on only 14.2% of their defensive possessions. Unfortunately, their offense wasn't much better with a 100.2 adjusted efficiency -- worse than Ohio State's inept offense by over 2 points. They had the second highest tempo in the conference, but were in the bottom 25% of shooting percentage, which means they might be better off slowing down and trying to get better shots....

Players to watch: ...because their best player is A.J. Hammons, a behemoth of a center that can move, shoot, and manhandle the paint. He's averaging 18/12/5 per 40, but therein lies the problem. Hammons plays only 24 minutes per game due to both crippling foul trouble and somewhat substandard conditioning. It's worth mentioning he's absolutely murdered Amir Williams both times they played this season, so that's going to be worth watching. On the Ohio State side, LaQuinton Ross got going in the last three games of the season, averaging 20 points and five rebounds on 53% shooting.

Prediction: I have a weird feeling about this game because it's always hard to beat a team three times in one season, regardless of the skill level of the opponent. I'll say Ohio State 65-55, but this could be close going into the last seven or so minutes.

Reasons to watch: Because Minnesota needs to avoid this loss to have a shot at the NCAA tournament. I'm pretty sure that a win here alone doesn't get them in, but it at least gets them a chance at a big win against second-seeded Wisconsin. Also, because this is probably the last time you'll get to see Tim Frazier in a Penn State jersey. Frazier's been one of the Big Ten's most underrated players for about three years now. With a 33% AST ratio and 55% TS rate, Frazier's been incredibly efficient for a player coming off of an Achilles tear.

Fun with numbers: Don't look for a lot of defense or rebounding in this game. Despite Minnesota's defense stymying Ohio State for long stretches this year, they ended up last in the conference in adjusted defensive efficiency at 107.7. Having said that, Penn State wasn't too far behind in ninth place at 106.3. Most of the struggles for these two teams on that end stem from an inability to rebound the ball, as they were the two worst teams in the conference in terms of giving up offensive rebounds. Both teams tend to play quite a bit of zone, and are somewhat light in the front court.

Finally, I just want to point out how often Penn State fouls on the defensive end, because HOLY MOTHER OF GOD THEIR DEFENSIVE FREE THROW RATE IS OVER .5. The next closest in the Big Ten is Michigan State at .44. The Nittany Lions rate of .51 is 16% higher than the next closest team in conference. Overall for the season, that's third worst in the nation among teams in the top 10 conferences in America. Hacking is bad, kids.

Players to watch: Penn State is carried by Frazier and D.J. Newbill, who combine to take over 40% of Penn State's shots when they're on the floor. Newbill has been top five in the Big Ten in scoring each of the last two seasons, and has exponentially increased his efficiency this season after being the definition of a negative volume scorer last season. He's more of a slasher than a shooter, and averages nearly 7 free throws per 40 minutes over the last two years. For Minnesota, the Hollinses -- Austin and Andre -- get most of the attention, but DeAndre Mathieu has been their best player this year. He's been a better scorer and distributor than the all-conference Andre Hollins, as well as an extremely pesky defender at the top of their zone.

Prediction: These two teams just played Sunday and Minnesota won by 18. Minnesota also won at Penn State by three in January. But you know what, I'm going with the upset here. There's no way the first round of the Big Ten Tournament can be chalk after this season, right? Plus, like I said earlier, it's incredibly difficult to win three straight times against the same team. Penn State comes through and extends Frazier's career with a 74-71 win.

Reasons to watch: Because Fran McCaffery is a veritable crazy person in the midst of a losing streak where they've given up an average of 82.5 points per game over their last six. Because...no seriously, if Iowa loses this game McCaffery is going to burn down the entire city of Indianapolis. If you live in Indianapolis, you might want to gather your wife and children and evacuate.

Fun with numbers: Luckily for Iowa's putrid defense, Northwestern's offense is even more deprived of skill. Their adjusted offensive efficiency in the Big Ten was 88.1, which was last place over seven points. Let me try and explain how large that difference is to you. Florida has the tenth rated offensive efficiency in the country at 117.3. To get to the 7.2 point difference that would match Northwestern's offensive impotence, you'd have to go all the way to 76th place California. Their effective field goal percentage was in the bottom 10% of the country. Their offensive rebounding percentage was fourth worst out of THREE HUNDRED AND FIFTY ONE TEAMS. If Iowa gives up 80 to this team, evacuate Indianapolis, Volcano Fran is going to erupt all over the town and burn everything to the ground.

Players to watch: Devyn Marble and Aaron White are two of my favorite players in the country. Marble is a relentless attacking guard that can get to the rim at will, and White is the do-it-all forward who holds this team together. You just wish that Iowa's supporting cast was more able to help them on the defensive end. Northwestern somehow still has Drew Crawford, who has to be at least 30 by now. Also, their only above average three-point threat, JerShon Cobb, is out for the rest of the season. That means, well, let's just assume there's not a whole lot that Northwestern can do against Iowa.

Prediction: As much as I think Iowa is playing awfully right now and want to see McCaffery's face turn as red as Jalen Rose's draft day suit, I just can't see it happening with this matchup. Iowa wins 80-62, and at least steadies their sinking ship.