We take a look at today's B1G Tourney quarterfinal action.

After what was turning out to be the most chalky day of Big Ten basketball all season, Northwestern came back and gave the tournament a bit of madness with a late win against Iowa. My only hope is that they were able to create a new home locker room in the 12 hours between games because only god knows what Fran McCaffery did to it after that loss. At least he can take solace in the fact that he is not future #B1G Basketball member Rutgers, who...

DOES THAT MEAN THEY ACTUALLY THEY HAD A 42.3 OFFENSIVE RATING? IS THAT POSSIBLE FOR A MAJOR CONFERENCE TEAM? AND A 35.5% TURNOVER RATE? DID THEY EVEN TAKE OFF THEIR WARMUPS? DIDN'T EDDIE JORDAN COACH IN THE NBA?

With that said, let's take a look at the #B1G board before Rutgers has a chance to get on it next season: 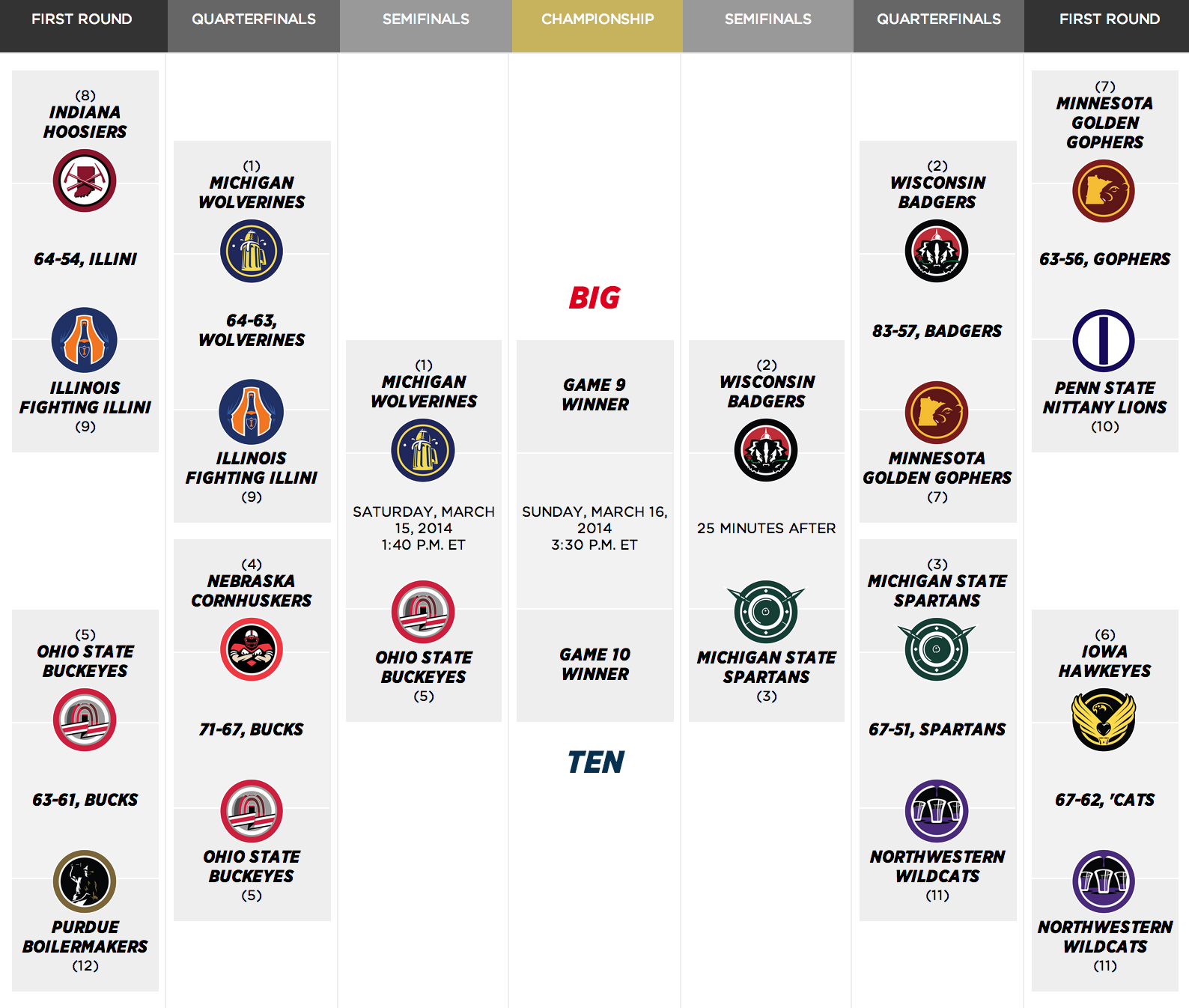 We tip off again at noon eastern time today, so let's get to the games:

Reasons to watch: Because Nik Stauskas is one of the best players in the country. Because John Beilein's offense and Michigan's execution are among the prettiest things to watch in college basketball. Because John Groce deserves some attention for having to grow up in Muncie, Indiana, which, unless you're Jerry Gergich, isn't much of a tourist attraction.

Fun with numbers: Unsurprisingly, Michigan finished with the best offense in the Big Ten, with a 107.1 adjusted offensive efficiency in conference according to Ken Pomeroy. Their 122.8 mark against all opponents was good for third in the country. They finished first in two-point percentage, free throw percentage, and effective field goal percentage, second in three-point percentage and turnover rate, and third in assist rate. Michigan's offense is a finely tuned instrument that not only gets efficient shots, but also makes them at a high rate. However, Illinois' defense this season has been excellent. At 13th in the country in adjusted defensive efficiency, look for them to try and muck it up and get physical with the smallish Wolverines.

Players to watch: Stauskas is something of a demi god that can make threes in rain, sleet or sun. He's improved his game vastly this season, taking on more of a ball-handling role as freshman Derrick Walton gets acclimated to the college game. You should enjoy Stauskas while you can, because's probably the closest thing to J.J. Redick that the college game has seen because of his ability both on-ball in pick-and-roll situations and off-ball off of screens. It's also worth watching how much Glenn Robinson III is involved in the offense. I was shocked to learn that Robinson actually take a larger percentage of shots while he's on the floor than both Stauskas and LeVert. That hasn't exactly translated to points though, as Dylan Burkhardt has noted in this FANTASTIC piece on his offensive game. Robinson remains excellent off of cuts but still can't create for himself. Without Trey Burke, this has led to increased usage and added defensive attention, and his numbers are down across the board because of it.

For Illinois, point guard Tracy Abrams ethered Indiana on Thursday for 25 points by blowing by defenders essentially at will. Plus, power guard Ray Rice will never not be entertaining.

Prediction: Michigan beat this team by 31 on March 4th, and I can't find a reason why they won't win again. It won't be by 31 this time as Groce gets his team to ratchet up the defensive intensity, but a comfortable win should be in the offing for the Wolverines. 70-60 looks good enough to me.

(oh, and I guess Ohio State is playing too)

Fun with numbers: These are the two best defensive teams in the Big Ten. Ohio State finished first in adjusted defensive efficiency, Nebraska second. Ohio State forced turnovers more often than anyone -- 21.2% of defensive possessions -- and Nebraska finished second in effective field goal percentage against at 47.7%. So this game will come down to who is making more shots while being defended well. Given that Ohio State has no one that can be counted on to consistently make jump shots outside of LaQuinton Ross, that might not end well for them.

But it's worth mentioning that Nebraska did a majority of their damage in conference this year at home. With only a 3-6 record on the road, and a crowd that will most likely be slightly biased towards the Buckeyes, it'll be interesting to see how Nebraska reacts away from Pinnacle Bank Arena.

Players to watch: Terran Petteway was first team All-Big Ten and gets a majority of the attention, but for my money it's Shavon Shields who gets this team going. During Nebraska's 8-1 stretch over their final nine games, Shields averaged 16.4 points and 6.5 rebounds while shooting over 50% in six of the nine games. He's also a versatile, long defender that can guard three positions. Plus he wears long sleeves. All players should be required to wear long sleeves because it looks awesome.

Prediction:This is going to be super close. I'm going to be a complete homer and say that Nebraska comes out of the gates struggling, leading to an Ohio State win. But this will probably be a one possession game in the final minutes. 61-60, an Ohio State W setting up a rivalry game with that state up north.

Reasons to watch: Because Minnesota will be playing with the intensity of Richard Sherman guarding Michael Crabtree as they try to secure a tournament bid. Because the Badgers' swing offense is a slow developing buzz saw of execution and grace. Because Frank Kaminsky is a seven footer that shoots threes, and everyone loves that. Because the games move over to Big Ten Network for the night session, meaning we won't have to listen to Dan Dakich insufferably attempt to figure out who the most famous people named Geno are again.

Fun with numbers: It's something of a miracle that Minnesota was able to defeat Wisconsin the first time, given the Badgers' normally unwavering ability to hang onto the ball. Wisconsin was second in the country this season in turnover rate at a paltry 12.8%, which partially led to their sixth place finish nationally in adjusted offensive efficiency. The only thing the Minnesota defense has done well this conference season is force steals, but they aren't going to get them against this Wisconsin squad. With Wisconsin's off the charts offensive execution and shooting ability, they should be able to just move the ball around and get open threes all day against the Gophers. Don't expect the Badgers, who were in the top 20% of the country in shooting three pointers, to only shoot 25% again from beyond the arc.

Players to watch: Kaminsky was first team All-Big Ten, and dropped 43 points in a game earlier this season. Sam Dekker is potentially a future first round pick whenever he decides to leave Wisconsin, but he had a somewhat underwhelming season in Kaminsky's shadow. The key player on Wisconsin tends to be Traevon Jackson. While the swing offense tends to create really good looks for shots through passing, Jackson is one of the few Wisconsin players who can get a shot on his own at the end of a shot clock. Unfortunately for the Badgers, this is normally either a feast or famine scenario as Jackson can be inefficient and turnover prone from time to time. If he can play within himself and the offense, Wisconsin will win this game.

For Minnesota, Deandre Mathieu and the Hollinses lead the attack from the perimeter and will most likely get their offense. However, the key to the game for Minnesota will be their big men Elliott Eliason and Maurice Walker. Neither of these guys are particularly mobile perimeter defenders, and they tend to be hidden in the 2-3 zone that coach Richard Pitino runs. However, if they're forced to try and run in transition with Dekker and Kaminsky, it could spell bad news for the Gophers.

Prediction: I haven't been particularly impressed with Minnesota this season, but just the fact that they've gotten to the point where they're playing a game for their tournament lives is impressive. I think Wisconsin wins this game comfortably based on the matchup most nights, but Minnesota's given them some issues for reasons that are beyond my understanding this year. I'll say Wisconsin wins 75-68, but it will probably end up being close because of what Minnesota is playing for.

Reasons to watch: Because it's apparently the state of Michigan versus the state of Illinois today between this and the first game. Because once Chris Collins gets players to Northwestern -- and he will -- they're going to be a real player in this conference due to his coaching ability. Because Tom Izzo dances on ladders. Because Rich Homie Quan might make an unannounced appearance, and you'd never want to miss that. Oh, and I guess because maybe Michigan State is finally a bit healthier after four days off this week.

Fun with numbers: This one is going to be almost all about the ridiculousness that was the Wildcats' upset of Iowa last night. First off, let's start with Northwestern's offensive showing against the putrid, entirely ineffectual Iowa defense.

So yeah, some of this was obviously luck, but holy crap Iowa needs to do something over the next week to play defense. Anyway, the reason I felt comfortable devoting most of that section to Northwestern is that Michigan State's stats really don't mean anything because they haven't had a full team throughout all of the Big Ten season. And yeah, obviously it's hard to expect them to get to full strength before the tournament at this point, but given the differing nature of their lineup night to night it's hard to take a lot of away from these numbers too.

Players to watch: Simply put, Adreian Payne is going to dominate this game. Northwestern's Alex Olah played pretty much the entire game Thursday night because the Wildcats only have ten players suiting up due to injury right now. He's their only big man that can do anything against Payne, and even his impact is going to be questionable. Payne needs to take it at Olah early, get him in foul trouble, and make the Wildcats go to the bench. Of course, the Spartans also have Gary Harris and Keith Appling. More than their actual play, keep an eye on their movement and health. Their presence shouldn't particularly matter against the Wildcats, but it will become important as they progress in the tournament.

For Northwestern, Tre Demps and Drew Crawford will look to take the game at the potentially injured guards of Michigan State early. They combined for 35 points, 11 assists, and 10 rebounds on 24 shots against the Hawkeyes, so if these two come out hot again it could let Northwestern hang tough for a while.

Prediction: Northwestern is really going to be relying on timely shooting from beyond the arc and a methodical coaching performance from Collins to have any shot to keep this close. Given that this group of players shot 28% from three this season, I'm going to guess they regress a bit from Thursday's barrage. Michigan State wins 81-64, but unfortunately Izzo does not do a ladder dance to "Pony."