Who will play for a Big Ten title Sunday? We take a look at the matchups.

We got a chance to see some madness-laden #B1G action yesterday, with a great afternoon of hoops including an 18 point comeback by Ohio State and an attempted buzzer beater by the upstart Illinois Fighting Illini. It's pretty fair to say that those of us who took off work in the afternoon were treated to a better time than the #B1G fan who "won" a six night stay at a Motel 6 will have.

So what if the night wasn't that great? The four best teams in the Big Ten – sorry Nebraska – are through to the semifinals, and we couldn't have two better matchups. Let's go to the #B1G board. 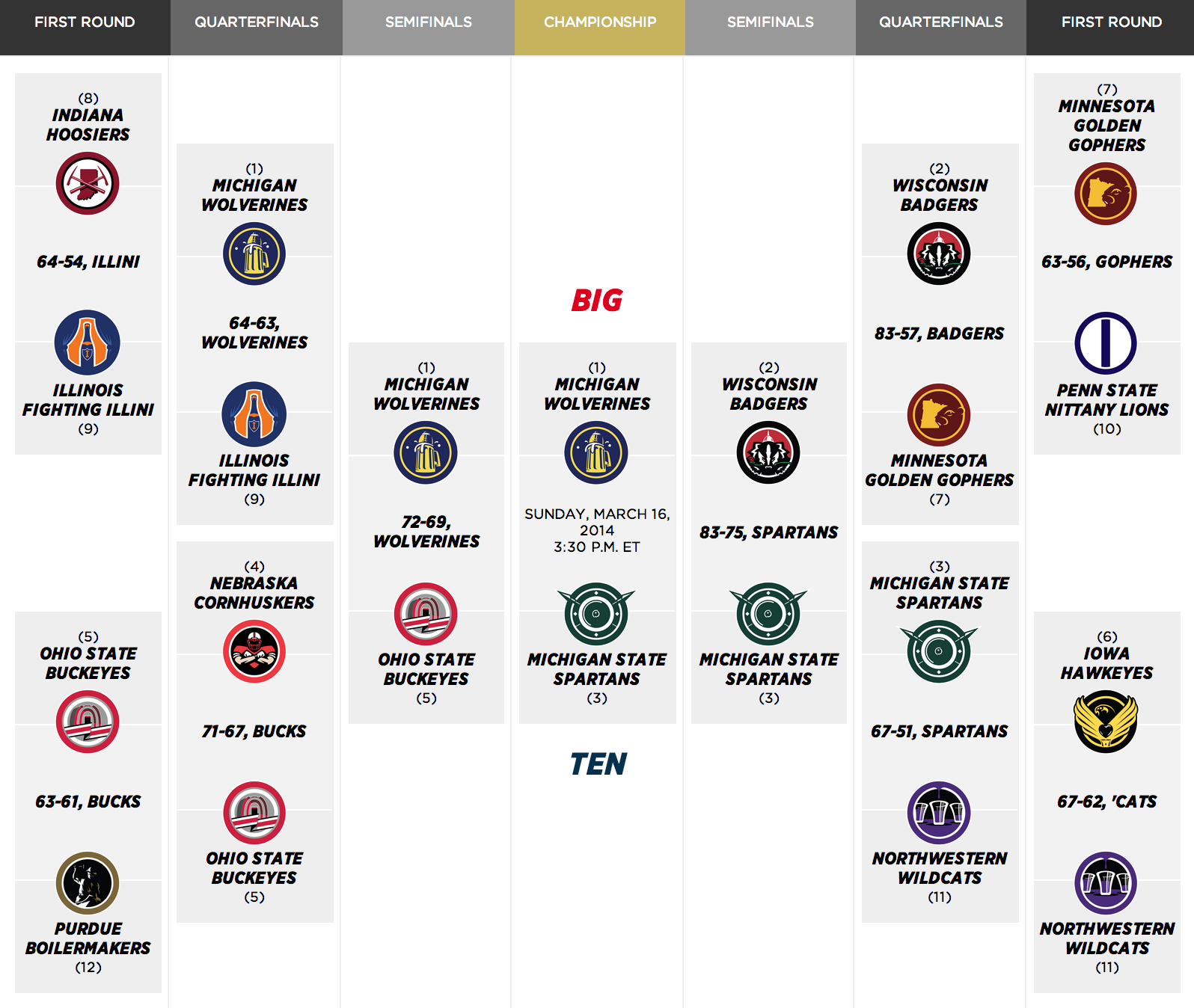 Reasons to watch: Because it's Ohio State-Michigan. It's an institution. Because both of these teams are in a desperate seeding battle with everyone so bunched up in the standings. Because we get to watch Aaron Craft try to annoy the ever loving hell out of Nik Stauskas like he did to Terran Petteway on Friday. Because Jordan Morgan is one of the few big men in the country that Amir Williams is more coordinated than. Because LaQuinton Ross is making himself some MONEYYYYY in this tournament.

Players to watch: Stauskas keyed Michigan's win Friday against Illinois, but also nearly shot them out of it whenever Illinois moved into that pesky zone. We can feel pretty confident that Thad Matta most likely will not show Michigan zone tomorrow given that he hasn't really shown it all year. Having said that, Craft's most important job on Saturday will not be as an offense initiator, but as a defender. Getting secondary scoring from Caris LeVert will be key for Michigan. He had a solid all-around game with 13 points, five rebounds and four assists against Illinois.

For Ohio State, it'll be interesting to see how Lenzelle Smith, Jr. responds to not playing much in the second half of Ohio State's comeback win Friday. He's been something of a disaster this season during Big Ten play, shooting 29% from three on nearly five attempts per game with a 48% true shooting percentage. Smith obviously provides a bit more than that, in that he defends well and rebounds well for his position, but he can't continue to be such an offensive liability if Ohio State is going to continue winning.

Plus, it's also worth mentioning how cash rules everything around LaQuinton Ross, get the money, dolla dolla bill y'all. He's playing aggressive, getting to the rim at will, and not floating around the perimeter. The only thing is that he needs to keep the fiery play to productive manners, and not let it boil over like it did against Nebraska when he was T'd up for shoving a player.

Prediction: Ohio State has been to the Big Ten Championship game in each of the last five iterations. I think they make it six in a row with a close, physical win against Michigan 71-69. Why? Because I'm not that much of a contrarian that I'm picking against Ohio State in a Michigan game, that's why.

Reasons to watch: Because when these squads are healthy, they're the two best teams in the conference. Because, forever and ever, we'll have this video of Tom Izzo climbing ladders and dancing to Pony. Because it's pretty amazing imagining Bo Ryan dancing on a ladder to Pony. Because these aren't the Badgers of yesteryear, and they don't play 50-49 games – in fact Florida, Virginia, and Ohio State, three of the top nine defenses in the country, are the only teams to hold Wisconsin under 60 this year.

Fun with numbers: Expect the foul line to play a big part in this game, and don't expect Michigan State to get many opportunities there. They're 322nd in the country in FTA per field goal, and Wisconsin is the best team in the NCAA at limiting fouls, only allowing .25 free throws per field goal. On the other side, Michigan State was second to last in the Big Ten allowing free throws per field goal, and Wisconsin was second in the Big Ten in drawing fouls per field goal. Particularly, freshman Nigel Hayes is excellent at drawing these fouls, with 7.6 fouls drawn per 40 – 13th in the entire country – and a Free Throw rate of .95.

Players to watch: Ben Brust was on fire Friday night for Wisconsin, dropping in 29 points, and Hayes scored 15 while grabbing six rebounds as well. But my guess is that the front court matchup of Sam Dekker and Frank Kaminsky will be the keys against Branden Dawson and Adreian Payne. Whoever wins that matchup will most likely win this game. Both Kaminsky and Payne like to move away from the hoop and shoot threes for guys over 6'10, so it'll be interesting which team can win the rebounding battle inside. Like, all Izzo teams, this Michigan State team is excellent on the boards at 29th in the country and second in the conference, but Wisconsin is just slightly better at 26th in the country and first in the conference. So watching the inside players is going to be essential to the game flow.

Prediction: Wisconsin is the better team right now. They're healthier, and they're peaking at the right time outside of their loss to finish the regular season against Nebraska. The Badgers get this one 74-67.