No Ohio State and two schools from Michigan – but it could be a tremendous, NCAA Tourney-type B1G finale.

It's an all-Michigan final for the Big Ten Conference Tournament Championship, with Michigan going up against Michigan State. We probably could have predicted this before the year, but not at all in the way that they actually got here. Both teams were somewhat ravaged by injuries – with Michigan losing center Mitch McGary for the year and Michigan State losing, well, everyone at one point or another. Glenn Robinson III was expected to take over the scoring for the Wolverines, but instead Nik Stauskas became the Big Ten Player of the Year. Michigan State's "big four" was expected to carry them, but instead guys like Denzel Valentine and Travis Trice were forced into Michigan State's top five in minutes played.

Before we delve in depth into this game, let's take one last look at the #B1G board and see how we got here: 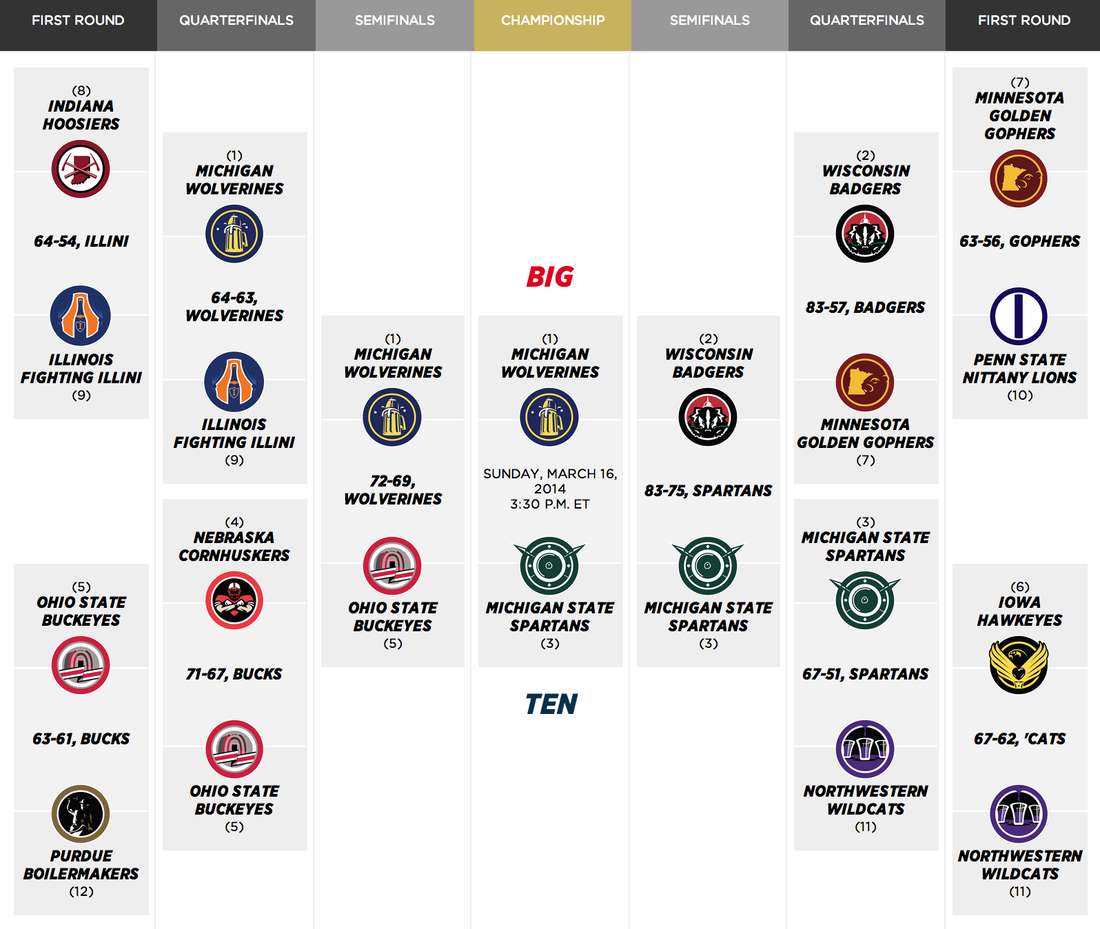 Reasons to watch: Because these are the two most talented teams in the Big Ten. Because you'll be watching three guys in my top 15 prospects for the 2014 NBA Draft in Gary Harris, Adreian Payne, and Nik Stauskas. Because Andrew Dakich and McGary are hilarious together on the sidelines for Michigan. BECAUSE TOM IZZO MIGHT GET TO CLIMB A LADDER AND DO SOMETHING LIKE THIS.

Fun with numbers: Let's talk about about Zak Irvin, or as I call him "mini-Deshaun." Irvin comes into games and just guns. His job is instant offense, and he's provided that in spades during conference play. He has a 61% TS%, which includes 43% from three and 17 points per 40 minutes. Irvin is a pretty big part of the Wolverines' Big Ten leading three point attack. They get more points from threes than anyone else in conference, and finished second in three point percentage.

The team they finished second to in three point percentage in the Big Ten happens to be Michigan State though. Often featuring a lineup that has five three point shooters due to Payne's perimeter prowess, the Spartans are able to not only bang inside and win the rebounding battle -- they are first in the conference in defensive rebounding rate at 72.5% -- but also they can also beat you from distance.

Players to watch: If their game against Wisconsin was any indication, the Spartans are starting to round into health at the right time. Payne scored 18 points in 17 foul-plagued minutes on Saturday, point guard Keith Appling was able to play 37 minutes, and Branden Dawson had 14 points and seven rebounds. They allowed Frank Kaminsky to go a little bit crazy during the minutes where Payne was off the floor, but the Wolverines don't have any big man like him who can attack all over the floor. Jordan Morgan and Jon Horford are strictly rim players – aside from the occasional bricked 15 footer from Horford – whose lack of skill level should help the four guard lineup of Michigan State get by.

The matchup to watch is Nik Stauskas against Gary Harris, particularly when the Wolverines have the ball. In their January game earlier this season, Harris hounded Stauskas all over the floor, forcing him to expend an awful lot of energy to get open. With both teams going on their third game in three days, look for Harris to try to do the same and allow his teammates to pick up the offensive slack.

Prediction: I've been preaching all tournament that it is tough to defeat a team three times in a single season, regardless of skill level. We saw it almost manifest itself with Ohio State's first game against Purdue, and we definitely saw it manifest itself with Iowa against Northwestern. My guess is that with two teams that are this evenly matched, we will see it happen again. Michigan State wins, 79-72, and becomes a trendy pick to succeed and peak in the NCAA Tournament next week.