Combining for 40 points, Lima Central Catholic's duo of guards Martyce Kimbrough and Xavier Simpson were the difference as the T-Birds took down Carlton Bragg and Cleveland Villa Angela-St. Joseph 64-62 on Saturday.

After racing out to a 34-25 halftime lead, Lima Central Catholic found themselves on the ropes against a long and athletic Villa Angela-St. Joseph squad. Behind clutch offensive rebounding and excellent guard play, Central Catholic held on in the final minutes to take down Carlton Bragg and VASJ, 64-62.

As two Maurice Johnson free throws cut the Central Catholic lead to 57-55 with 1:24 remaining, T-Birds sophomore point guard Xavier Simpson hit the biggest shot of his young career. Weaving through the VASJ defense, Simpson launched a floater from ten feet out over the outstretched arms of 6'9 Viking power forward Dererk Pardon, finding nothing but net to put Central Catholic ahead 59-55 with 1:10 remaining.

As Pardon scored on the following possession for VASJ, senior Central Catholic guard Martyce Kimbrough was fouled with just under a minute to go. Knocking down the first free throw, Kimbrough's second attempt missed right, but Central Catholic sophomore forward Dantez Walton pulled down the biggest rebound of his career over Bragg, getting the ball back to Kimbrough for another chance at the charity stripe.

As Kimbrough split free throws on the following trip, VASJ would turn it over on the ensuing possession, as Simpson's steal gave Central Catholic a chance to put the game away. Much like Kimbrough, Simpson made one of two, putting Central Catholic ahead 62-57 with 13.8 seconds to play.

As junior VASJ guard Brian Parker knocked down two free throws on the following trip, Central Catholic found themselves in a ton of trouble after Simpson missed one of two attempts from the charity stripe, giving VASJ a chance, trailing 63-59 with 11.5 seconds to play.

Bragg would hit a three on the following trip, cutting LCC's lead to 63-62 with 4.1 seconds remaining. Before the T-Birds could run a play, Central Catholic junior forward Jake Williams was fouled by Pardon before the inbound.

As Williams missed the first attempt, the 6'3 forward got his own rebound on the second attempt, as VASJ made a crucial mentor error, forgetting to box out the shooter. Williams would dish to sophomore guard Tre Cobbs, as Cobbs hit one of two free throws to push the Central Catholic lead to 64-62 with 1.9 seconds to play.

Parker would miss a halfcourt heave at the buzzer, giving Central Catholic its first state championship since 2010. With the victory over VASJ, Central Catholic ends the season at 25-4, including 10-straight wins to round out the year.

Led by Kimbrough's 22 points, Central Catholic received a huge boost from the Indianapolis University commit, whose 18 points in the first half, including a buzzer-beating three to go into halftime, gave the T-Birds the momentum they needed. 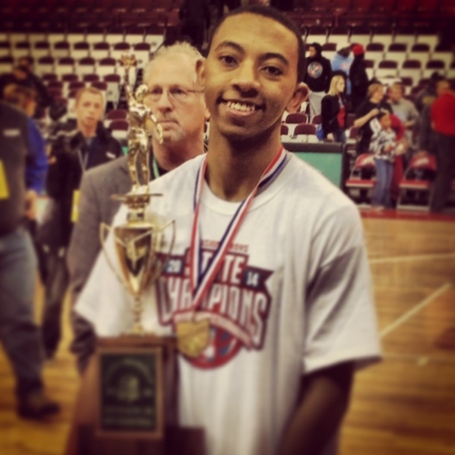 As Simpson opted to get his teammates involved in the first two quarters, the sophomore floor general took over in the second half. Scoring 16 of his 18 points in the final two frames, Simpson's ice cold floater to put the T-Birds up four was arguably the biggest play of the game.

Outside of the duo of guards, Williams played an excellent game in the post, finishing with 12 points and eight rebounds, while only committing one foul for the entire game. The sophomore Cobbs wasn't involved as much offensively, but played great defense for 29 minutes, while finishing with four rebounds and three assists.

For VASJ, Bragg led the way with 23 points, but was largely ineffective for large stretches in the second half. Finish with three rebounds, Bragg wasn't the force on the glass that I expected the star junior to be, a development in Saturday's title game that played a major role.

Outside of Bragg, the junior post man Pardon played excellent, finishing with 17 points and 15 rebounds on 8-of-11 shooting. Facing a smaller defender on each offensive trip, Pardon's work on the glass and on the low-block helped VASJ enjoy a 33-24 advantage on the glass.

Parker had another solid performance, scoring 11 of his 15 points in the second half. Outside of Bragg, Pardon and Parker, the remaining Vikings combined to score just seven points.