We've had to go about two months without Buckeye football, but that's all set to change tomorrow as spring practice kicks off. This will be the earliest start to spring practice in school history, topping last year's date by one day.

The Buckeyes will take the field on Tuesday and Thursday before taking off until March 18th with Ohio State's spring break set to begin following the end of classes on Friday.

Heading into this year's spring practices, there are plenty of interesting storylines including who will step up as the backup quarterback, who gains the early advantage for the starting running back spot, how the two new coaches will impact the team, who'll be replacing four starters along the offensive line, and many more.

Can Braxton finish strong? Braxton Miller was dominant for most of last year, but started to struggled when November rolled around. He was terrible through the air at Illinois, at home against Indiana, and at Michigan. Following those performances, he struggled mightily in the Big Ten Championship Game against Michigan State and followed that up with an average, injury-addled performance against Clemson.

If he can stay healthy and perform consistently throughout the season, he will likely be invited to the Heisman ceremony in New York for the first time in his career. But those are two mighty big ifs. 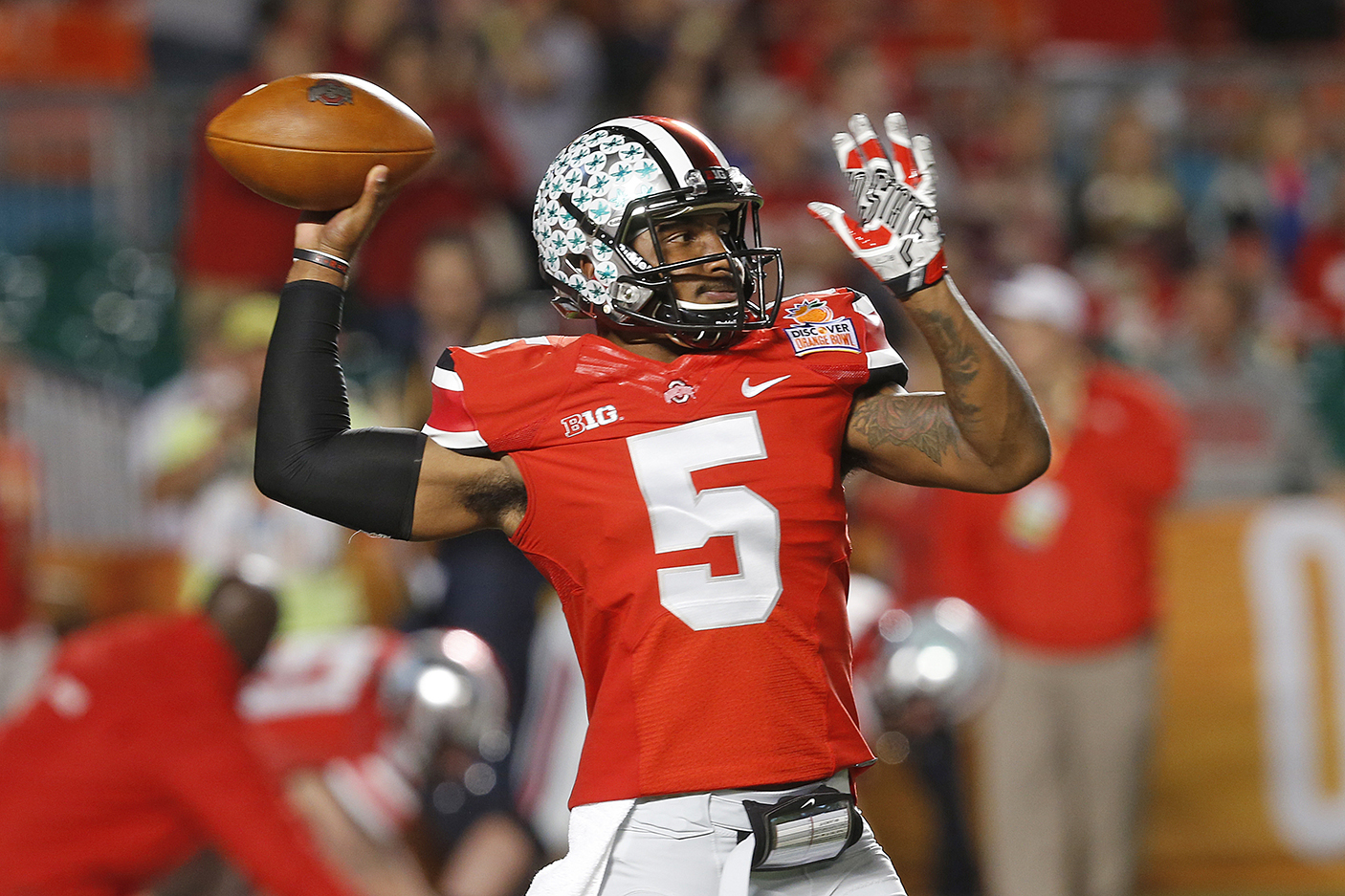 Who steps up as leaders? This spring will be big for finding out who will step up as leaders of the team. The well-heralded Christian Bryant, Ryan Shazier, Jack Mewhort, Kenny Guiton, C.J. Barnett, and others are no longer with the program. The only returning captain is Braxton Miller, but he isn't really known as a vocal leader. Hopefully some of the now upperclassmen can emerge throughout these next few weeks.

Can Ash fix the defense? Ohio State's run defense was pretty strong last year, but the pass defense was terrible and may have cost the Buckeyes the game against Michigan State and Clemson. Ash will be tasked with making sure the young defensive backs are playing like they're capable of for the Ohio State D.

Can OSU reclaim the B1G crown in Urban's third season? This will be year number three of the Urban Meyer era. It has been three years since the Buckeyes last won a Big Ten Championship, which is the expectation of Ohio State every year. Now in his third season, expectations are rising for the Buckeyes to win the Big Ten crown and qualify for the first ever College Football Playoff. They're likely to be one of if not the favorites again in the B1G, but they'll likely need to win in East Lansing this November in order to help bring their goals to fruition.

Braxton likely out for the spring, who steps up as the backup? Per an OSU release, Braxton Miller likely won't take a snap in spring practice due to a recent operation on his throwing shoulder. While it's a bit of a buzz kill we won't see much Braxton, this will give redshirt sophomore Cardale Jones and redshirt freshman J.T. Barrett plenty of opportunities in practice to emerge as the number two quarterback. True freshman early enrollee Stephen Collier will also get plenty of reps, but is a betting favorite to redshirt.

Who fills the big hole at running back that Carlos Hyde leaves behind? One of the most fun competitions to follow this spring will be the battle at running back. Sophomore Ezekiel Elliott and senior Rod Smith are probably the top two competitors to fill the void left by Hyde. Also in the mix will be a redshirt sophomore duo of Bri'onte Dunn and Warren Ball. Right now, Elliott likely holds the early edge, but Smith is very much in the mix as well.

Who joins Devin Smith in the starting lineup? It's almost a lock that Devin Smith will be in the starting lineup next year, but after that things are a little foggier. Senior Evan Spencer started last year, but didn't really jump off the tape and could definitely lose his starting spot to an underclassman if he's outperformed this spring. Junior wideout Corey Smith, who redshirted last year after coming to Ohio State from a junior college, is a guy many expect to breakout. Other players firmly in the mix include Georgia Tech transfer junior Jeff Greene, sophomore Michael Thomas, redshirt freshman Jalin Marshall, and true freshmen Johnnie Dixon and Curtis Samuel (listed as RB/WR hybrid). Wide receivers coach Zach Smith told reporters on National Signing Day that there were no starters at receiver going into spring ball.

Battle for four spots on the offensive line. Who steps up? Junior Taylor Decker is the only returning starter on the offensive line and will move from right to left tackle. The other four spots are up for grabs. Junior Jacoby Boren and redshirt freshman Billy Price will battle for the starting nod at center. There are tons of players in the mix for the starting spots at guard including sophomore Pat Elflein, who started the Big Ten title game in place of Marcus Hall. Elflein will probably grab one of the two. Antonio Underwood, Joel Hale, and Chase Farris (when healthy) will battle for the other. Three names come to mind for the right tackle slot: Darryl Baldwin probably holds a slight edge heading into camp, but will face stiff competition from sophomore Kyle Dodson and redshirt freshman Evan Lisle. We'll take a flier on Lisle and wager he surprises some, and might just come out of spring as the starter.

Is the defensive line the strongest part of the team going into the spring? There will be quite a few familiar names on the defensive line this season. Noah Spence, Michael Bennett, Adolphus Washington, and Joey Bosa are the likely starters heading into spring. Junior Jamal Marcus will likely fill in for Spence, who has to sit out against Navy and Virginia Tech due to a suspension. Junior Tommy Schutt, senior Steve Miller, and sophomore Michael Hill are all expected to play roles in the defense as well. Chris Carter and redshirt freshman Tracy Sprinkle will also have a shot at earning some playing time with solid performances in the spring.

Who gains the edge for WILL linebacker spot, Curtis Grant in trouble? It's pretty safe to assume that Joshua Perry is a heavy favorite to keep his spot at SAM linebacker, but there are a lot of question marks when it comes to the other spots. Sophomore Trey Johnson and redshirt freshman Darron Lee will battle for the starting spot at WILL linebacker. Senior Curtis Grant will come into the spring as the starting MIKE linebacker, but he will need to hold off talented freshman early enrollee Raekwon McMillan.

Who steps up in the defensive backfield? There's no question thats senior Doran Grant will be one of the starting cornerbacks. Junior Armani Reeves is probably the favorite for the other spot, but he will need to hold off a rising redshirt freshman duo of Gareon Conley and Eli Apple. Conley could be a dark horse to win this race. When it comes to safety, Vonn Bell likely has the free safety position on lockdown, but there will be a battle for strong safety. Sophomore Cam Burrows (moved from corner to safety), redshirt freshman Christopher Worley, and Ron Tanner should all be in it. Sophomore Tyvis Powell could probably fit in both spots, but I think he plays the nickel back position like he did for most of last year.

Will Sean Nuernberger claim the starting kicker spot? Cam Johnston is a lock to be the starter at punter, with freshman early enrollee Sean Nuernberger the favorite to fill the hole left by Drew Basil at the placekicker position. Can he hold off walk-on threats?

Two new coaches on the staff

Ohio State has two new coaches on the staff heading into the spring. Larry Johnson will replace Mike Vrabel as the defensive line coach. Vrabel left Ohio State for the Houston Texans back in January. Johnson will be able to work with one of the most talented defensive lines in the nation.

Chris Ash will will take the place of Everett Withers as co-defensive coordinator and safeties coach. Withers left OSU for the head coaching job at James Madison a few months back. Ash will be tasked with turning around a defensive backfield that struggled mightily last year. It's unclear if the play-calling duties will be up to him, Luke Fickell, or a combination of the two.

According to an Ohio State release, the following players will start practicing with new position groups this spring:

It's not a shock the Spencer won't be practicing this spring after suffering a nasty leg injury in the Discover Orange Bowl. Farris and Bogard will also miss practice because they're recovering from surgery from last fall.

As mentioned earlier, Braxton will be limited this spring after undergoing a minor surgery on his shoulder a few weeks ago. It's good to hear that Clark is back doing football activities after suffering a tough injury at the beginning of the 2013 season.

- Transfer news: The Ohio State released confirmed that linebacker Mike Mitchell will not be practicing with the team. He is expected to transfer after completing this semester in Columbus.

The team will practice on the following days:

- More seats in the 'Shoe: Also according to OSU, there will be an additional 2,600 seats in Ohio Stadium next fall. There will also be a new tunnel for the team.

- Below is a look at Ohio State's future opponents from the Big Ten's "West" division:

In addition to that, the Big Ten will have their largest postseason lineup in conference history this season with 12 affiliated bowl games:

- Bowl to be played in Detroit (Detroit, Mich.)