The OSU women's rowing team won a national championship in 2013. Their most important pieces are back – and hungry for more.

Share All sharing options for: Ohio State women's rowing: The best team no one's talking about

6:30 a.m.: The Columbus sky has that bluish-gray aura that only comes in the very first stages of the sunrise, when the day's first light has just begun to filter over the horizon. It's a time that many students on campus never see, save those who are all-night cramming for final exams or waking up with dry mouths and aching heads on their next-door neighbors' lawns. Ohio State's most recent women's national championship team is already on the water. Layers of clothing stacked against the pre-dawn cold are eventually stripped off as muscles warm up and the sun begins to rise.

We talk often about a sports team coming together, a whole becoming greater than the sum of its parts, to achieve greatness. But when we say that, what we're really talking about are great teams that receive a lift from an individual performance or two that are particularly transcendent. The Buckeye football team's 2013 regular season was great by any measure, but we wouldn't have beaten Northwestern without Carlos Hyde strapping the offense to his back in the second half. Our basketball team was great in '12-'13, but we would have fallen to less-celebrated Iowa State without a pair of Aaron Craft miracles in the final minutes. The Mud Dogs certainly would not have won the Bourbon Bowl had Bobby Boucher not shown up at halftime. The list goes on.

It is in this capacity that rowing is unlike any other sport. There can be no individual, superstar performances, because good rowing only comes from perfect synchronicity--that sweet spot where strength, timing, and guts collide. When done poorly, to watch rowing is akin to watching a baby deer trying to ice skate--jerky, erratic, unpredictable. But to see it done well is like watching a piston-driven razor being drawn across the face of the water. And rowing is very, very difficult to do well.

"The Gift Is Each Other" 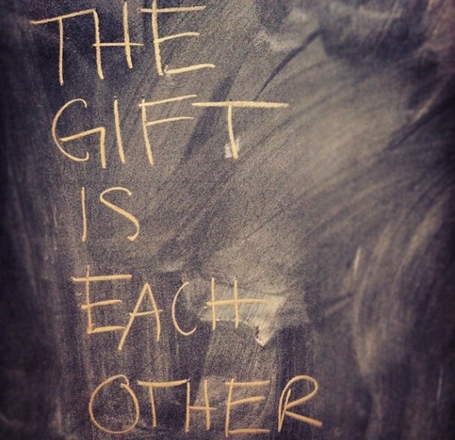 Scrawled across the team locker room's chalkboard last year was a simple message: "The Gift Is Each Other". The mantra was clear, and the reminder it provided important. The other girls in the boat, the coxswain at the bow, the coach on the shore--these were who you were meant to sweat for, to suffer for. There are few gifts in the world like that of being a part of a championship team, and the 2013 Buckeye rowing squad appreciated this like few others have.

A cursory glance through the photos of the team out on the water, or celebrating after an all-too-typical victory, shows the kind of radiant and united joy that you would expect from a team that has dared to give so much for one another. Listening to the lady Buckeyes talk about each other evokes the idea of Ubuntu, a humanist philosophy originating in the southern tip of Africa. The core principle of Ubuntu is "I am because you are". People demonstrating this philosophy live by the ideals of togetherness and collaboration.

These same roots run through the varsity boats of Ohio State Women's rowing. Senior rower Julie Walsh believes that "the love and respect we have for each other is responsible for a lot of the successes we've had." The successes have been frequent and noteworthy, so there must be an awful lot of love and respect there.

You would be hard pressed to find a rower on Ohio State's team who doesn't feel as though her teammates really are a gift. And why would they feel any other way? The lady Buckeyes boast some pretty serious hardware among them. Not counting 2013's national championship, the Ohio State Women's Rowing Team has recently racked up:

A collegiate crew team is broken down into a First Varsity Eight, a Second Varsity Eight, and a Varsity Four for the purposes of competition. There are actually nine or five women in the boat, as the coxswain is also present. (For those unfamiliar with the role of the coxswain (KAHK-sin), imagine if Thad Matta were half of his height and weight, and was allowed to stand at the top of the key directing his offense instead of being relegated to the sidelines.)The respective finishes of these three boats (in separate heats) are combined, and the team with the best overall finish comes in first. In rowing, as in a math relay or zombie apocalypse, you are only as fast as your slowest member.
This makes the finishes of the three OSU teams at last year's national championship--1st (First Varsity Four), 3rd (First Varsity Eight), and 1st again (Second Varsity Eight) particularly impressive. That Ohio State only edged 2nd-place California by two aggregate points after such an outrageous showing further entrenches the idea of just how fierce last year's competition was, and how much effort it takes to triumph in rowing. 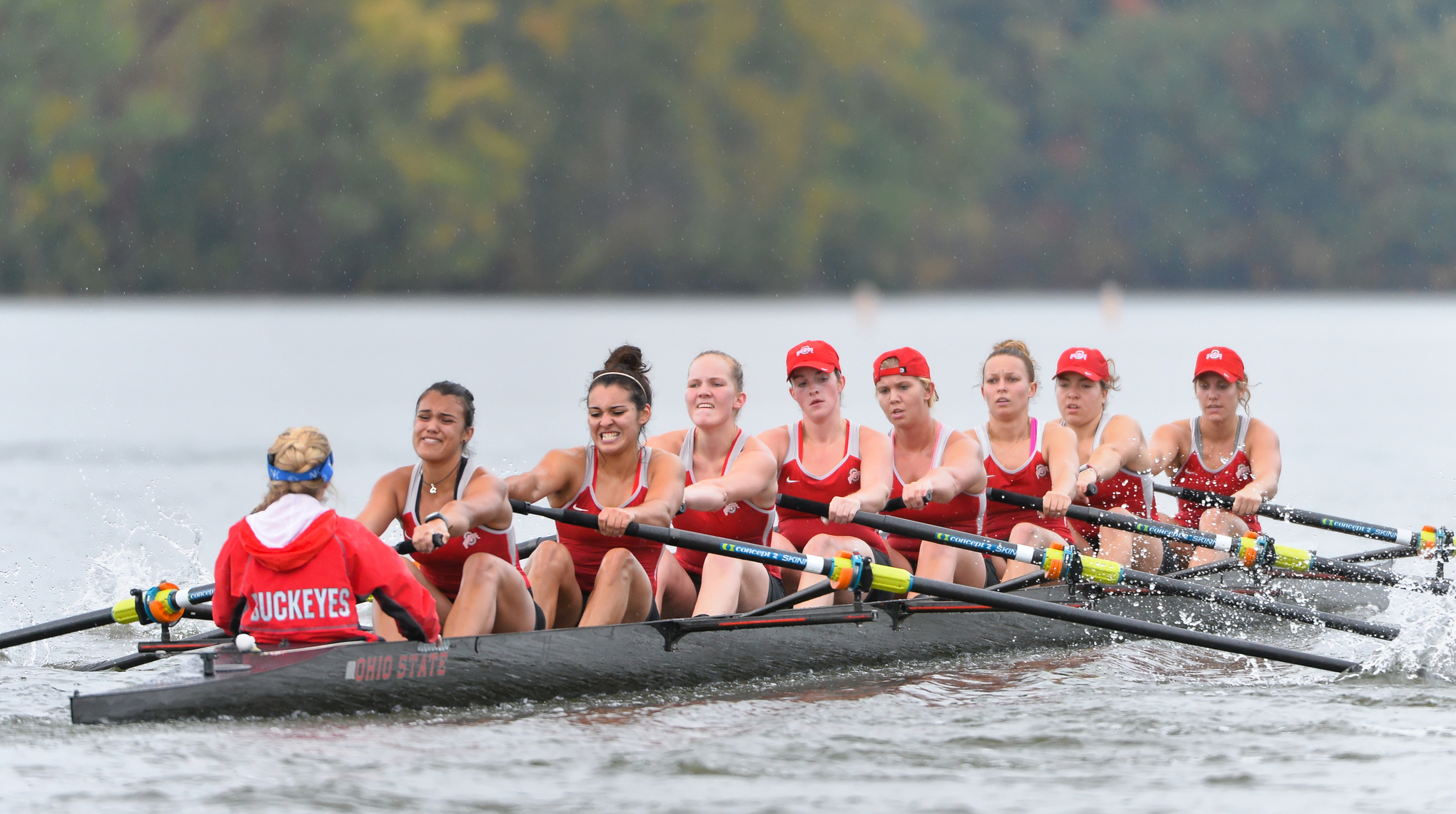 As the reigning national champs, the Buckeyes have a pretty serious bulls-eye on them, and the expectations inside and outside the team are high. Along with that pressure comes a cool sort of confidence, summed up well by Walsh: "The team still has a lot of members who competed last year and helped win the conference and national championships, so we know that our goal is attainable and I think that's making us pretty fearless. We aren't holding anything back."

Having a core group full of veteran talent is certainly a big part of repeating. But college sports, with their necessarily high turnover rate, are often unkind to dreams of year-in-year-out success. So how do the Buckeyes plan on surmounting this entrenched obstacle of collegiate athletics? Claire-Louise Bode, the heavily-decorated South African senior, embraces it: "Change is a great thing for sports. Changing pace...keeps us on our toes.We have a new assistant coach and graduate assistant coach on our team this year, who are able to give us a fresh look into our working dynamic. We also have a great group of freshmen who are ready to take on the challenge of filling the shoes of past Ohio State Buckeyes."

The saccharine sweetness that comes in our sports media narrative about athletes who "play the game the right way" is both overwhelming and off-putting, but it's incredibly difficult not to feel that way about these rowers. Who wouldn't want to root for a team that is expressly that--a team? As Bode describes it, "I have become a part of something that is bigger than what I could have ever imagined." There are no superstars here. There is one team, one goal, and one message: Go Bucks.