Share All sharing options for: What transfer Chad Lindsay brings to Ohio State

The Buckeyes are coming into the 2014 season with a depleted offensive line after losing four starters to graduation. When Braxton Miller decided to return for his senior season, he could not have felt fully comfortable given the departure of All-American Jack Mewhort, guards Andrew Norwell and Marcus Hall, and center Corey Linsley. After a less than amusing blocking display by a talented but  green offensive line during the spring game, Coach Urban Meyer must have jumped at the opportunity that former Alabama Crimson Tide center Chad Lindsay was looking at Ohio State as a possible transfer option after graduating (which would allow him to start immediately). Tuesday, Lindsay announced he was going to do just that.

Why is this news?: Tomorrow's Ohio State news, today

After choosing the Buckeyes over Michigan and California, Ohio State has gotten a player that was developed under Alabama head coach Nick Saban for four seasons and backed up 2x All-American Barrett Jones in 2011 and 2012. As a redshirt freshman in 2011, he only appeared in two games. In 2012, Lindsay appeared in 10 games, mostly at right guard, including the Iron Bowl and the National Championship against Notre Dame.

Last season, Lindsay started four games at center and had a heated battle in the offseason with Ryan Kelly to replace Jones. Kelly eventually won the battle in camp but then suffered a knee injury which opened the door for Lindsay to become AJ McCarron's starting center for three games. When Kelly went down, Saban had full confidence in Lindsay to do the job by saying, "Chad's been in the program. He's a hard worker. He's a strong guy, very smart and understands. We have a lot of confidence in Chad, that he can go in there and do the job because he's done a good job for us in the past."

After his first start, Saban went on to say, "When he got an opportunity, he was able to take advantage of it in a positive way, which was helpful to the team. It was also invaluable to his development as well." Lindsay gained Coach Saban's trust and after starting those games during the middle of the season. He also started the 2014 Iron Bowl after Kelly re-tweaked his knee in practice that week. Once again, Saban was fully confident in Lindsay to start at center in the biggest game of the season, "Chad did a good job for us this year and we have every bit of confidence in him. It's an opportunity for him. If Ryan can't play, I'm sure he'll do a good job for us." As everyone knows, the Crimson Tide lost the game but they racked up 218 yards on the ground and McCarron was only sacked once during the game.

Although Lindsay only has four career starts under his belt, he should come in and start right away for the Buckeyes

Although Lindsay only has four career starts under his belt, he should come in and start right away for the Buckeyes. As Coach Saban said, he will bring smarts and strength to the offensive line and he should gain Braxton Miller's faith on day one. Lindsay will not come into Columbus and instantly become an All-American or turn this year's offensive line back into the 2013 version, but he will be a good bridge for the 2014 season to give the young guys a chance to develop on their own time, rather than being forced into action potentially too early.

It is tough to breakdown center play, as they are usually not asked to do much one-on-one blocking, but here is what Lindsay will bring to the Buckeyes:

1. The first play of the game, the Crimson Tide wanted to come out and be physical by running the ball right at the vulnerable Auburn defensive line. Lindsay comes out of the huddle and calls out the Mike linebacker. Although it is important to be a solid blocker as a center, the ability to call out proper blocking schemes and identify certain defenders is just as important, if not more important. A great center is basically the quarterback of the offensive line and if he does not call out the proper protection, it will spell doom for the entire offense. 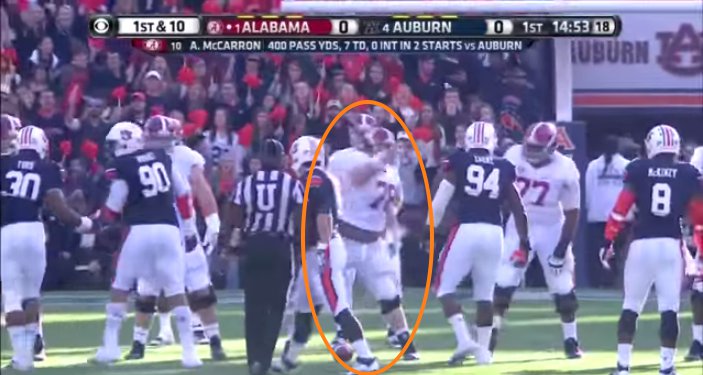 2. Alabama is going to run a basic dive out of shotgun, with TJ Yeldon attacking the A-gap (between C and G). Lindsay (#78) is going to down block and double team the defensive tackle with the left guard (#77). 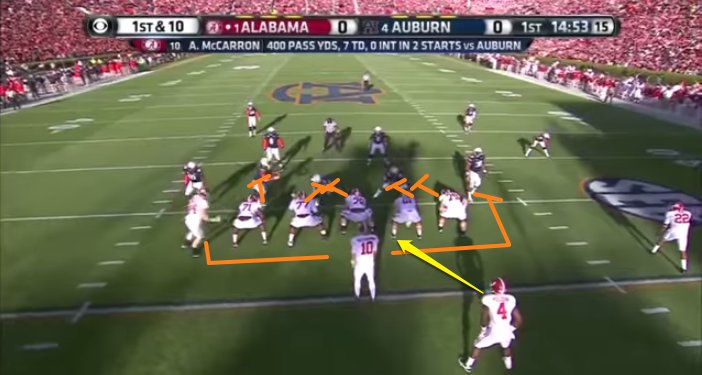 3. Lindsay down blocks and double teams the Auburn defensive tackle, driving him completely out of the play. 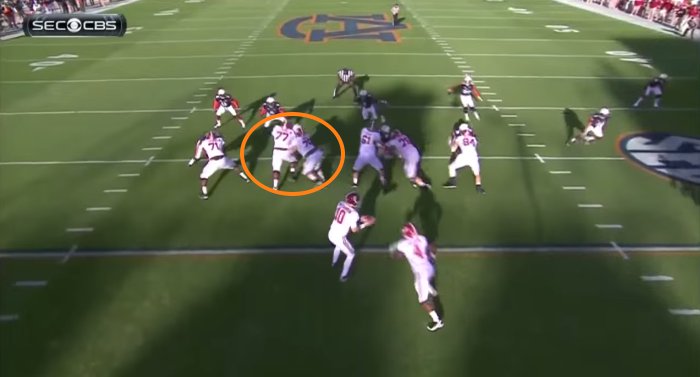 4. The whole offensive line did their job on the play and Yeldon ripped off a 31-yard run to start the game. 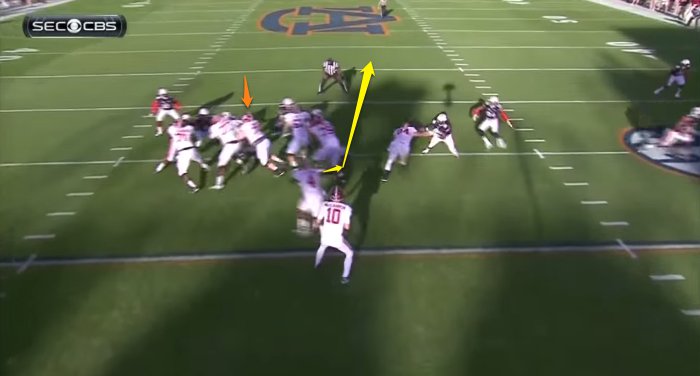 Urban Meyer's offense will ask Lindsay to get down field more often, but it will be important for Lindsay to get the young offensive line on the same page, limiting protection breakdowns. Gaining a smart player like Lindsay who has been groomed by a coaching staff that has produced numerous offensive lineman who have became first round picks should excite Miller and make the team better than it was yesterday.