The former Ohio State offensive lineman was selected by Green Bay with the 161st pick in the fifth round.

Following in the footsteps of offensive linemate (and new Indianapolis Colt) Jack Mewhort, Corey Linsley is headed to play football at the next level.  Linsley was selected by the Green Bay Packers with the 161st pick in the 2014 NFL Draft.  Linsley was named first-team All-Big Ten by both the coaches and the media and helped steward an offensive line that ranked fifth nationally in rushing and set Ohio State school records for points scored, touchdowns, and totaled the third most rushing touchdowns in school history. 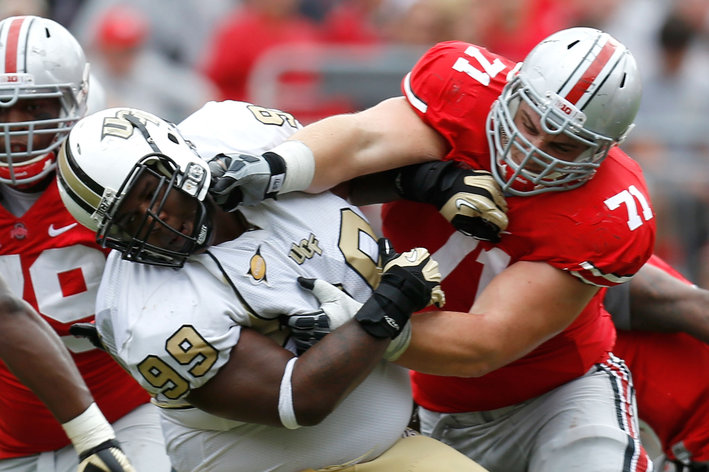 "Linsley will bring to the table some athleticism to the offensive line of whatever team drafts him. The Youngstown native has good quickness and is able to stay light on his feet in pass protection. Linsley is good at keeping his head on a swivel after the snap which allows him to make any blitz pickups that might be necessary." - LGHL's Brett Ludwiczak

Linsley, one of four seniors on the 2013 unit (which also included draft prospect Andrew Norwell, likely UFA Marcus Hall, and Mewhort), helped move the line for second round draft pick running back Carlos Hyde (now of the San Francisco 49ers). Though by his own admission it took several years for Linsley to truly mature and come into his own as a football player, once he did, he joined an elite group of players that includes the Jets' Nick Mangold and the Jaguars' Michael Brewster as stalwarts in the middle of some outstanding Buckeye o-lines.

Heading into his senior season, Linsley was on the Rimington Trophy preseason watch list. The Rimington goes annually to the nation's best center. Linsley started all 12 games on the Buckeyes' undefeated 2012 squad and was a staple for this past year's Orange Bowl participant side.

Here's a photo of Linsley getting a phone call from the Packers giving him the good news: