In a bit of a surprise, Ohio State safety Christian Bryant is headed to the St. Louis Rams.

After missing the majority of his senior season with a major ankle injury, Christian Bryant took the first step towards returning to the field. Having exhausted his eligibility (and had multiple appeal requests denied by the NCAA), Glenville pipeline product Christian Bryant heads to the next level where he'll get a chance to make his dreams come true after surprisingly being selected by the St. Louis Rams with the 241st pick in the 7th round of the 2014 NFL Draft. 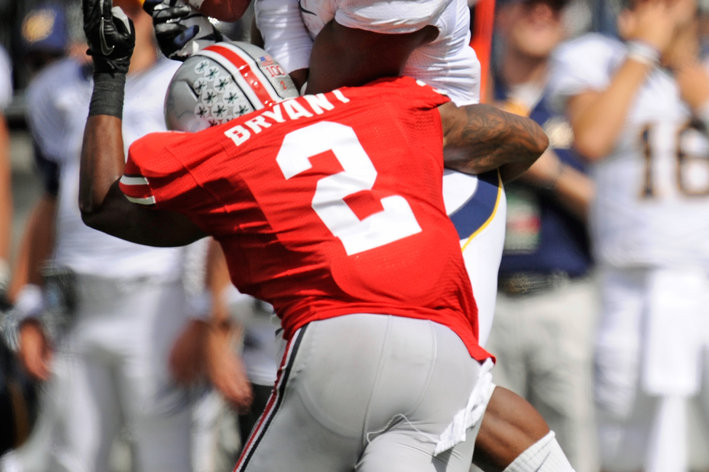 "A leader in the secondary, Bryant's impact on and off the field was greatly missed for the remainder of last season. Although undersized at 5'9 and 208 pounds, Bryant brings great toughness, grit and valuable intangibles to the defensive backfield. " - LGHL's Zach Fleer

"Praise God! It's just a blessing that somebody has given the talent I put on tape and gave me a shot," Bryant told the team. "My ankle is doing a lot better. I've been working with some doctors and chiropractors...I'm close to 100%."

Undersized for a strong safety (though he split time between both safety positions during his time in college), Bryant struggled with injuries throughout his time in Columbus (as a freshman, he missed time following surgery on his right foot), when healthy, he played bigger than he was and earned the respect of his teammates, being voted as a captain his senior year.

A three-year starter, Bryant entered 2013 on preseason Nagurski and Thorpe Award watch lists. His play his junior year earned him second-team All-Big Ten recognition. SB Nation's draft expert Dan Kadar pegged Bryant as the 253rd best player in the 2014 draft class, which with only 256 picks left an awfully slim margin for error. Even still, Bryant made the most of not being at full strength for his pro day, and the Rams must've seen his real potential from the 27 games he started and 36 he played during what will be remembered as an injury marred career.