After not being drafted, former Buckeye guard Marcus Hall is bound for Indianapolis, per Cleveland.com's Doug Lesmerises.

Following teammates Jack Mewhort (Indianapolis Colts) and Corey Linsley (Green Bay Packers), Marcus Hall is headed to the next level. Though he wasn't chosen in the 2014 NFL Draft, Hall was able to pick the best landing spot for him and will join a group of Buckeyes looking to make their mark at the next level. 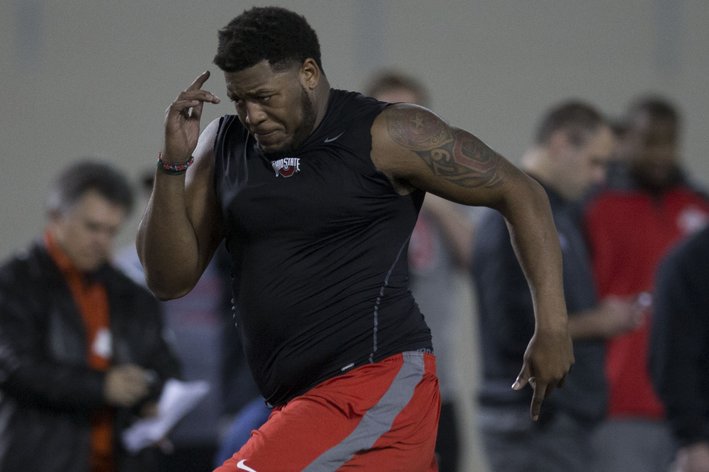 "You can't teach size, and at 6'5 312 pounds, Hall's got it. But whether or not he can grow his football IQ and improve his consistency and technique at the next level remains the question. While finding success at the next level will take a lot more than self discipline, Hall has a puncher's chance to make a practice squad out of camp. Though he's more likely than not to be a priority undrafted free agent, he pulls well and could be a sleeper prospect at the next level." - LGHL's Luke Zimmermann

Though his career ended in infamy after giving a two fingered salute to the opposing fans after he was ejected from an in-game brawl against arch rival Michigan, Hall was a solid contributor and a starter over two seasons. Though he was sometimes overshadowed by a more talented group around him, he was a stalwart on the third best rushing touchdown producing line in Ohio State's long, storied ground game history.

Hall was named honorable mention all-Big Ten after his senior season. Over the course of his redshirt junior and senior years, Ohio State lost only two games, Hall's final two as a Buckeye. He'll now get to prove his merits at his new team's rookie mini-camp and hope to survive and advance from there.