Even with Joe Burrow's commitment a few days ago, many Buckeye fans remain worried about the state of the 2015 class. It's easy to see why -- you won't find Ohio State listed on 247Sport's 2015 Composite Team Rankings until you scroll to the very bottom and click "see more." There you'll find the Buckeyes at 53rd.

That's not a good position to be in.

Alabama, the top-ranked class, has 13 four- or five-star commitments. Not only are Michigan State, Illinois, Rutgers, Wisconsin, Michigan, Iowa, Northwestern, and Penn State currently ahead of the Buckeyes from the Big Ten, but so are Rice, Tulane, and Florida Atlantic.

Obviously it won't stay like this. Ohio State will end with a bigger, more talented class than those final three schools, and it will likely also be better than most (if not all) of our in-conference rivals too. But the slow start has disconcerting for even the most optimistic fans.

Just how worried should we be at this point, though? I took a look at Ohio State recruiting data from 2010-2015 to try and answer three basic questions:

Here was the result from calculating the total class score by month from 2010-2015: 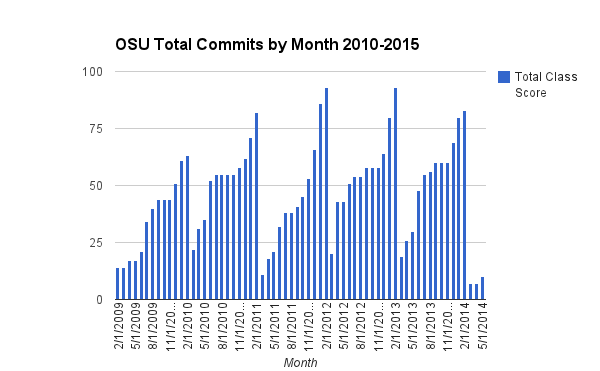 To answer the first question, I just compared the total class scores for May for each of the years in my sample:

So yes, the 2015 class looks like it's off to a slower start than in previous classes. The 2015 class has three commits for a total of ten stars.

The next lowest total commit score in May was in May of 2009 for the 2010 class, which had 17 total stars from Scott McVey, David Durham, Andrew Norwell, Jamel Turner, and J.T. Moore (funny enough, only J.T. Moore and Andrew Norwell played significant time for the Buckeyes from that group).

Finally, a reason to be optimistic. I took a look at the largest differences between two months' total commit scores and tried to see if there were any patterns for each recruiting class. May to June and December to January (and obviously, recruits committing in February for National Letter of Intent Day) were the months with the biggest average change.

That means that, if the pattern holds, we should see plenty of activity over the next month or so, then another jump at the end of 2014.

In any case, there's no need to panic. Urban has plenty of time to pull together yet another fantastic class, despite the slower than average start.