The former Buckeye great will be plying his trade on Sundays with the Pittsburgh Steelers after being taken with the 15th pick in the first round.

After anchoring Ohio State's defense for the last two seasons, the 6-2, 222 pound linebacker from Pompato Beach, Florida, will be taking his talents to the NFL, after getting drafted by the Pittsburgh Steelers with the 15th pick in the first round. Shazier was ranked No. 26 overall on SB Nation's Top 200 prospects, making him the third best available outside linebacker. 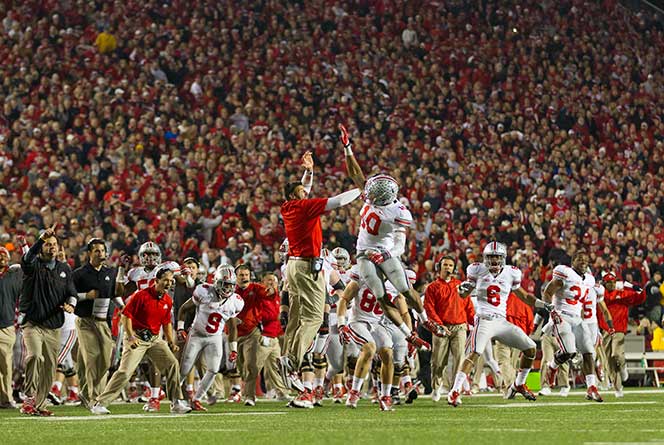 "Against the run, Shazier uses his athleticism and instincts to make plays in the backfield or at the line of scrimmage. He moves well laterally and explodes towards the ballcarrier. Shazier shoots gaps instinctively and is a solid form tackler who delivers a pop, rather than catching the ballcarrier. His workout numbers aren't an aberration and he is not just a workout warrior (see: Gholston, Vernon); Shazier plays fast on tape, too. " - LGHL's Christopher Jason

The 2013 First-Team All-American registered 259 tackles, 40.5 tackles for loss and seven forced fumbles the past two seasons, and recorded double digit tackles in seven games last season at the Will linebacker spot. Shazier, easily the best defensive player for the Orange Bowl losing Buckeyes, paced the Bucks each of the past two season.

On Shazier, SB Nation's Dan Kadar (and partially Matthew Fairburn on a previous Mocking the Draft podcast) had the following to say:

Shazier is a good blitzer, but he's not a good pass rusher. What does that mean? Shazier isn't the type of outside linebacker who should be relied on to rush the passer on a consistent basis. He's not Von Miller. However, he can really fire off the edge and get to the quarterback, particularly if it's just a running back trying to block him.

Shazier didn't run the 40-yard dash at the NFL Scouting Combine due to a hamstring injury.  At Ohio State's pro day, he checked in with a blazing 4.36. His athleticism and speed, along with his ability as a pass rusher, should make him an excellent addition to the Steelers.