Roby made it two Buckeyes picked in the first round, after being grabbed by the Denver Broncos with the 31st pick in the draft.

Bradley Roby, a 5'11, 192 pound corner from Fort Worth, Texas, is the 2nd Ohio State Buckeye picked in the first round of 2014 NFL Draft, going 31st to the Denver Broncos. He joins Ryan Shazier, who beat most projections and went earlier than expect to to the Pittsburgh Steelers with the 15th pick. Roby was SB Nation's 25th ranked overall player with just TCU corner Jason Verrett and Michigan State's Darqueze Dennard preferred at the corner position. 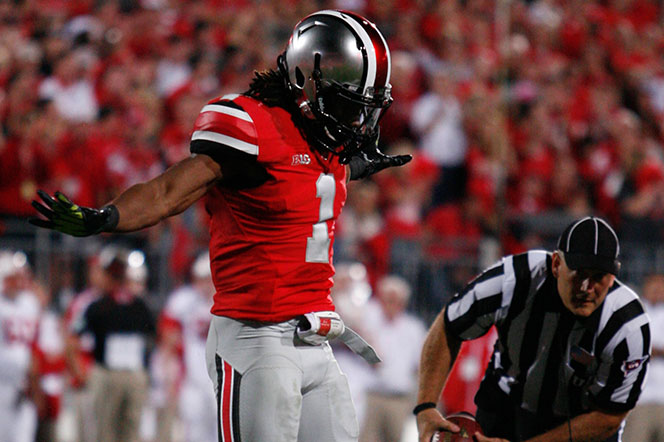 "Roby excels in press-man coverage, where he can use his supreme athleticism and physicality. In 2013, Roby was not used correctly at Ohio State. They played far too much zone (which he struggled in) and they did not tailor their coverage to Roby's strengths. He has very good feet and hip flexibility that allows him to change direction on a dime to get correct body position. Roby does a good job at mirroring receivers and when in man coverage he breaks on the ball very well. He has good ball skills and makes all the plays he should." - LGHL's Christopher Jason

Statistically, Roby didn't have his best season with the Buckeyes, although he struggled both with injuries and a scheme that sold out to stop the run at times. Roby also had some off the field issues to deal with, as he was cited for an OVI right before the draft. His potential, speed (a 4.39 unofficial 40 yard dash), and strong ball skills make him a very attractive cornerback prospect.

Despite not living up to the high first round potential he had before he returned to Ohio State for his final season in Columbus, Roby was still good enough to earn first-team All-Big Ten honors. Roby did struggle though in certain one-on-one matchups (former Wisconsin receiver Jared Abbrederis was one in which he had a particularly bad showing). Some attributed this to poor conditioning following a suspension to open the season.

SB Nation's draft analyst, Dan Kadar, had the following to add on what Roby brings to the next level:

Roby's natural athleticism often bails out his lack of technique and instincts. That's what a 4.04 three-cone and a 38.5-inch vertical leap will do for a player. Too often Roby gets burned because he'll have his eyes in the backfield. In turn, this will lead to Roby gambling on a throw and often missing out.

Roby likely won't step right into the starting lineup his first day at camp, but his high upside makes his pick a worthwhile one and he has a real chance to be a difference maker in the NFL.