The former Ohio State running back that helped lead the offense on the ground is headed to the 49ers after being taken with the 57th pick in the second round.

Carlos Hyde, the 5'11, 230-pound running back from Naples, Florida, was selected by the 49ers and is the third Buckeye to be taken in the 2014 NFL Draft. Hyde was SB Nation's third ranked running back and 75th player overall after a stellar senior season where he rushed for 1,521 yards and 15 touchdowns, despite being suspended for the first three games of the season. 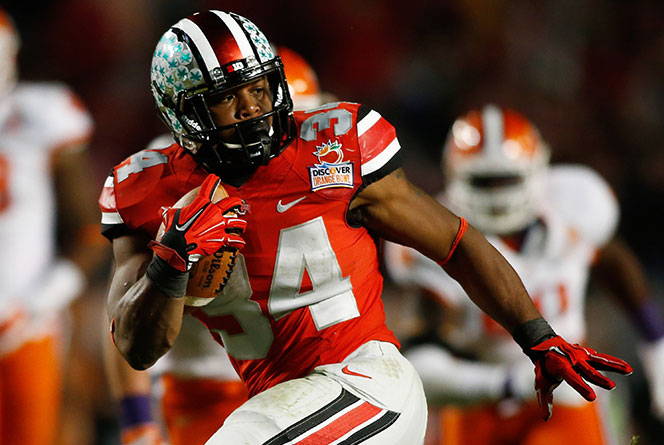 "When he lowers his pads, Hyde is like a freight train. Running with a head of steam and continuing to move his feet, Hyde is tough to bring to the ground, even for the best linebackers in the country. A simple arm tackle will not do, as Hyde will simply push the attempted tackler to the side.." - LGHL's Andrew Lind

The first-team All-Big Ten running back was the second half of the two-headed monster that was Ohio State's rushing attack, with the first half going to quarterback Braxton Miller. Together, they helped the Buckeyes attain the fifth-best rushing attack in the country. During his four-year career at Ohio State, Hyde improved steadily before really taking off during his senior year, where he averaged 7.3 yards per carry.

El Guapo will be remembered fondly in Columbus, from his breakout game against Nebraska in 2011, to his heartfelt speech after willing Ohio State to victory on the road at Northwestern last season and helping lead the Buckeyes to the Big Ten Championship game.

On Carlos Hyde in the NFL, SB Nation's Dan Kadar had the following to say about the running back:

If there is a Frank Gore comparison for Hyde, it is because of his power running style. Like Gore, Hyde gets low and wide around contact. And it happens often. Hyde is the type of running back who will seek out defenders because he can often get past first contact. When he's running between the tackles in a pile, Hyde will keep his legs moving to churn out extra yardage.