Who were the best 8 recent Ohio State football teams?

What if we put all the great Ohio State teams over the last few years, put them in a computer simulator, and figured out who was the best?

Share All sharing options for: Who were the best 8 recent Ohio State football teams?

I played around with the great WhatIfSports.com simulator a few days ago, trying to simulate through an entire World Cup-style college football playoff. The system allows you to plug in two teams, specify weather conditions, make a few lineup tweaks, and then BAM, it spits out an entire simulated box score before you could reach over for a PlayStation controller.

It's a cool tool, and perhaps the coolest bit is that it has data going back all the way to 1996, so if you wanted to see who would win a game between say, last year's Alabama team, and the 1999 Hawaii squad, you could. This tool allows us to potentially answer one of the great offseason Ohio State blog questions of our time. For example, let's see what would happen if we matched up Ohio State's excellent 2006 team against a hapless squad, like, Florida International. 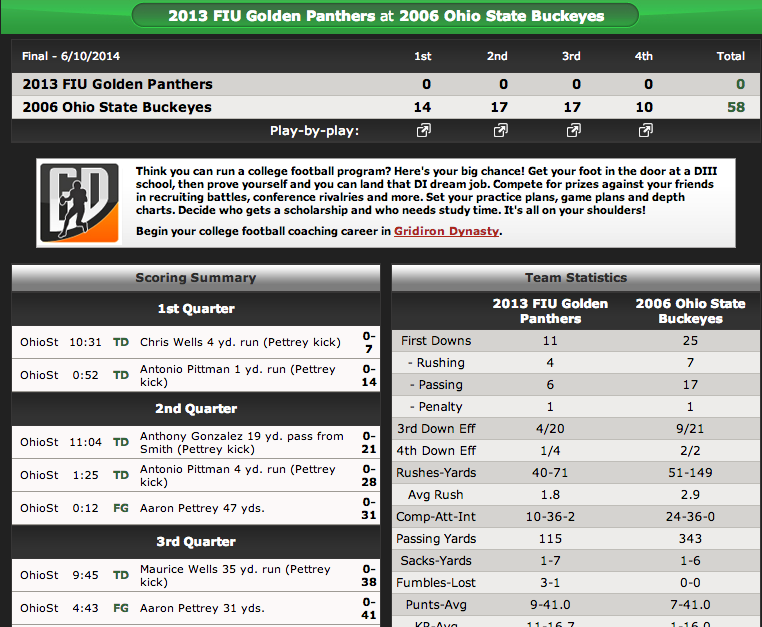 We *could* waste an entire afternoon refreshing the screen and trying to find the first Jim Tressel team to drop a hundred on some hapless Conference USA squad, OR we could use this tool to help us answer one of the great offseason Ohio State blog questions of all time:

When looking at the data, it's hard not be impressed with how consistently excellent Ohio State has been over that era (which, by the way, spans the entire lifetime of a current recruit). Since 1996, Ohio State has failed to win at least eight games only three times: In 1999 (John Cooper's second to last year, when they finished 6-6), 2001, (Jim Tressel's first season, where they finished 7-5), and 2011 (Luke Fickell's first year, where they finished 6-7 in a year wracked by suspensions, surprise turnover, and a new coach). From John Cooper to Jim Tressel to Urban F. Meyer, the Buckeyes have typically been an excellent program.

That means that we have the ultimate first world fan problem: how to we pick which teams to include in the tournament, and how we do seed them?

That's where you come in. I'll list what I think are the best possible candidates for inclusion into our eight-team, All-Ohio State tournament, and you guys can debate in the comments who should go where. Tomorrow, after taking your suggestions (and those of our staff) into consideration, I'll seed the teams, run some simulations, and let you know what the computer gave for our championship game. Finally, on Thursday, we'll simulate the championship, and consider the matter settled forever and ever.

With that said, for your consideration, some of the best Ohio State football teams since 1996 include:

Sure, this was the most accomplished Ohio State team of the era, and an absolute lock for the tournament, but were they the *best* team? A punishing rushing attack led by Maurice Clarett and Lydell Ross, an excellent defense and a kicker who became a civic institution paced the team..but this squad didn't have an offense that lit your hair on fire, and let teams like Purdue and Cincinnati hang around.

Thanks to a two-headed monster at QB and the stout rushing of Pepe Pearson, this team outscored their opposition 142-7 over the first two weeks of the year, then beat Top 5 Notre Dame and Penn State the following weeks, lest the pundits claim they didn't play nobody.  Only a blemish against Michigan kept them from running the table, but they did beat a Jake Plummer-led Arizona State team to win the Rose Bowl.

With Joe Germaine, David Boston, Dee Miller and Michael Wiley, this might have been the most explosive Buckeye team on offense. A stingy defense gave up more than 20 points only once over the entire season as well. Of course, that one game came against Michigan State, but this team did beat Michigan, and beat Texas A&M in the Sugar Bowl.

Led by Troy Smith, this squad put up points in bunches, while James Laurinaitis and Malcolm Jenkins led an athletic defense full of pros. Ted Ginn Jr gave a huge weapon on special teams, and perhaps we can just forget how this season ended.

The squad stumbled a little early (thanks, Ryan Hamby), but hammered a good Notre Dame team in the Fiesta Bowl, and once Troy Smith took over the wheel, the offense was productive, scoring at least 35 points in six of their final seven games.

This team did spend time at #1 in the polls, featured Beanie Wells bulldozing teams, a great defense, and solid WR depth.

Sure, the secondary was a tire fire, but you watched this team. It did score eleventy billion points. Could it beat some of the other Ohio State teams in a single elimination game? Potentially!

Okay, let's hear it. How would you seed these, and which team would you leave off? Did we miss anyone? Does the 2002 team automatically get the number one seed? What about the 1998 team, that absolutely blasted everybody (except Sparty)? Would 2013 Ohio State be the most dangerous 8 seed? What about 2005?

Let us know in the comments, on Twitter, or on Facebook, and we'll start the games tomorrow.