The Kings have arrived. City Prep, Columbus' newest preparatory school, unveiled its first class of student-athletes and gave a detailed look into what looks to be the area's next athletic powerhouse on Wednesday night. Under the direction of Mike Thornton, director of student affairs and boys basketball head coach, City Prep is intent on changing the culture in central Ohio, both academically and athletically. With a class full of the area's top 2018 and 2019 talent, City Prep's future is as bright as ever.

Centered around a "blended learning model," City Prep will combine cutting-edge technology with hands-on instruction in the classroom to give its students a new-age learning experience. The school will operate on a four-day school week from Monday through Thursday, while Fridays will serve as an "extended learning opportunity" day each week.

"Academically, we are using a blended model (technology and human interaction) to educate our kids through hands-on projects and student-led research. With a four-day school week, we are giving more options to our students and families for Extended Learning Opportunities through community partnerships that bring real life experiences into the classroom every Passion Friday," Thornton said. "Each school day is 7 a.m. through 5 p.m., structured to assist each family, while enjoying precious family time and allowing each student to complete their homework, receive academic enrichment/intervention and spend time in their passions, like arts and athletics."

Students will be given a plethora of options for their learning experience, ranging from music production to photography, with many other programs in between. Driven by an innovative approach to learning, City Prep aims to give its student-athletes an opportunity to greater prepare themselves for college, while receiving top of the line instruction on the hardwood from Thornton.

"Utilizing a digital, award-winning and NCAA certified curriculum, taught by Ohio Department of Education instructors, we offer an educational experience unlike any other institution in this region," Thornton said. 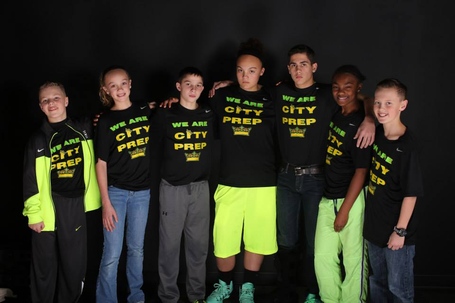 So, who is going to don the green and yellow in City Prep's inaugural year? Bringing in a skilled class of incoming eighth and ninth grade students, City Prep will not be short on talent in its first year on the basketball court.

Led by an athletic and lengthy 2018 class, the Kings will be led by 6-foot-5 forwards Jerome Hunter, Stanley Williams and Stephon Williams in 2014-15. Athletic 6-foot-4 wing Deshawn Daniels is a great addition for the Kings, as the small forward was up between Cincinnati Walnut Hills and Columbus Africentric before pledging to City Prep. In addition to the height and size in the front court, City Prep adds a talented group of guards that should excel under Thornton, who achieved great success at the statewide level at both Africentric and Harvest Prep.

Modeling the program off La Lumiere School in northern Indiana, the leaders of City Prep want the basketball program to not only be competitive at a statewide level, but to be a national powerhouse. Hoping to compete with schools such as Huntington Prep and Findlay Prep, City Prep has certainly laid the foundation to a promising future. With an entire floor of its Refugee Road Campus (the school is located on Hamilton Road across from Eastland Mall) dedicated to strength development and agility training, City Prep's athletic facilities already rival that of the area's top high school programs. All-Ohio Basketball executive George Howard is a vital part to the City Prep operation, serving as director of development and corporate sponsorship and fundraiser for the school, which has made the Kings a force to be dealt with in central Ohio already.

"Athletically, we offer highly-motivated coaches who have coached and/or played on the highest levels, including professionally," Thornton said. "We have a team of certified trainers that will build each athlete for their specific sport."

While City Prep will play a blended schedule this season, filled with freshman, junior varsity and varsity teams, the Kings will not compete in any of the area's athletic conferences. While being a non-member of the Ohio High School Athletic Association, City Prep will operate similar to that of Huntington Prep, who does not compete in West Virginia's state tournament. With only eighth and ninth-grade students for the inaugural year, City Prep must wait until 2015-16 to play a primarily varsity-level schedule.

"This year we will compete mostly at the JV level. We will have freshman and varsity games as well. With this inaugural class, the potential is enormous," Thornton said. "But potential is nothing without progress. We have to get better. I believe if the group we have now continues to work hard and work together, we can and will become one of the top teams in the nation."

While many of these same powerhouse prep programs have caught a bad rap from skeptics who feel the high school game is being negatively affected, LGHL took to Twitter to ask Columbus basketball fans what they thought of the city's newest prep powerhouse.

What do my Columbus followers think? Is a prep school in the city good or bad for basketball? Let me know. Looking for commentary

For the most part, City Prep received positive reviews.

@ZachFleerLGHL I think it's perfect. Another way of keeping our talent here and bringing attention to us.

@ZachFleerLGHL cons and pros .. Its meant for kids who already have notice but need grades..

@ZachFleerLGHL will this take away from talented teams in the current city league? Suppose a kid or 2 leave their current team for the prep?

@ZachFleerLGHL I HOPE it works!

@ZachFleerLGHL brings in more talented players, and more talented teams will come to play in Columbus too. I don't see any cons with it.

Previously mentioned, City Prep is not a member of the OHSAA, which means the program does not have to follow any of the guidelines that most schools in Ohio abide by. Thornton touched on the school's unique opportunity in athletics, and where he sees the program going in the future.

"Being an independent athletic association, we have no limits as to how much we can interact with our athletes to prepare them for their next level of performance," Thornton said. "We have the freedom to play the best competition in the country in order to give our student-athletes the top exposure in the country. There will eventually be dorms for those student-athletes that want to move to Columbus and be a part of the City Prep Royal Family. Our potential is limitless."

To learn more about City Prep, check out this video from coach Thornton below.