We're up to the thrilling championship game in our best Ohio State team tournament. How does the finale go?

Share All sharing options for: Ohio State football: Who wins our 1998 vs 2005 OSU championship game? 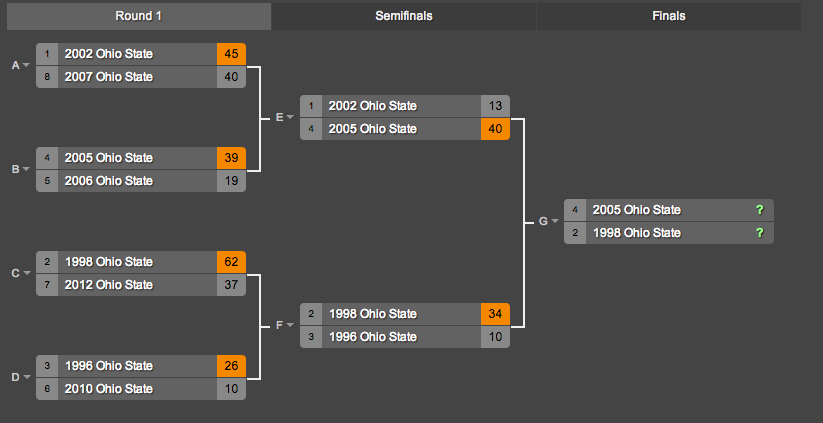 If our poll from yesterday was any indication, most of you seem to expect the 1998 team to be victorious (as I'm typing this, they had a 55%-38% advantage in our poll). Let's see what the computer had to say:

For funsies, I ran this simulation 15 times. The 2005 squad won exactly one of those matchups, and it was a 4 OT affair, where the 1998 team turned the ball over four times. Also, the 2005 team was randomly coached by Nick Saban. Lots of weird variables in that one.

So let's take a look at the box score here. How, exactly, did the 1998 dominate this game? 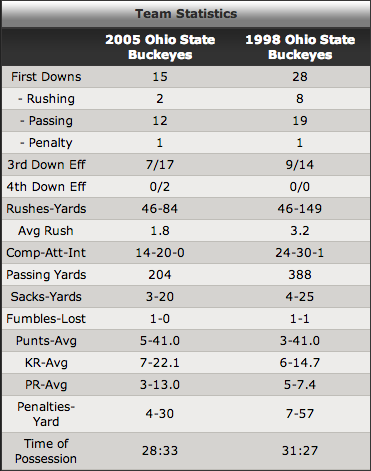 The simulator doesn't chart specific plays, so we can only generalize here, but the 2005 Ohio State team averaging only 1.8 yards per carry on the ground couldn't have helped. The 1998 also totally carved up the 2005 vaunted defense, to 537 total yards, a 64% conversion rate on 3rd down, and a huge advantage in first downs. 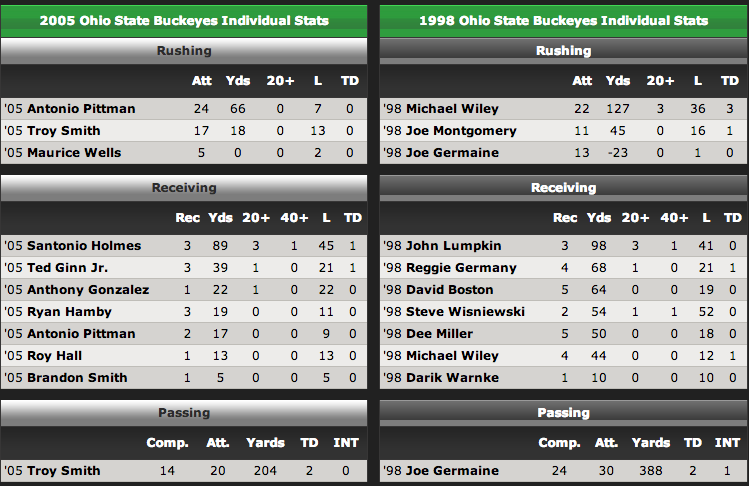 I don't see how the 2005 team would beat many good teams if Antonio Pittman's longest rush was for only seven yards, or if Troy Smith had to do everything himself. Santonio Holmes looked explosive, but he paled in comparison to the day that Joe Germaine had, against a really good defense, which would make things even easier for Wiley. 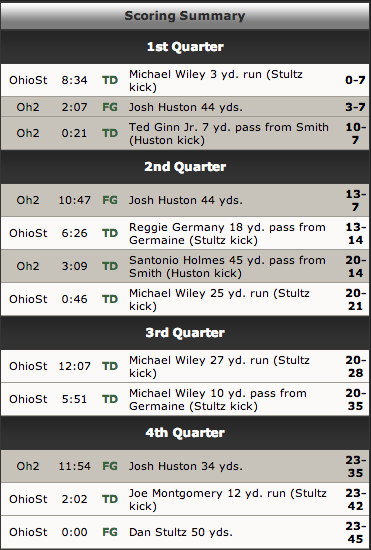 So this looks like it would have actually been a really interesting game for the first half! The 2005 offense was completely shut down after intermission though, as the 1998 team would rip off a 31-3 run after Holmes scored on a 45 yard bomb with about three minutes to go in the first half. Looks like Germaine nailed the uh, three minute drill, to go into halftime with the lead, and then summarily destroyed the 2005 Buckeyes.

It isn't all bad though. Look! Sacks!

Hard to imagine Hawk and Carpenter not getting to the QB a few times here. Looks like it wasn't enough.

Maybe the computer is wrong, but the 1998 Ohio State team feels nigh unstoppable doing the simulations. Even when I threw them against elite teams of the past year. Like, uh, Alabama:

Or better yet, Florida State:

And, just because I felt like torturing myself, I had to plug this into the computer, too:

WHYYYYYYYYYYY /throws laptop out the window.

So there you have it. According to a few single data points in a computer simulator, the 1998 Ohio State Buckeye team was the greatest of the last 18 years, even better than the one who won a national championship, or the two others that went to a title game. The '98 squad beat an No. 11 ranked WVU to open the season on the road, beat a #21 Missouri two weeks later, then clobbered a top ten Penn State squad the very next week. It was one of the rate Cooper teams to beat Michigan, and still beat a good Texas A&M team by double digits in the Sugar Bowl. They finished #2 in the nation.