How EA Sports can save its college football video game franchise

If the video game company is to continue its college football franchise, it must turn the game over to fans.

Share All sharing options for: How EA Sports can save its college football video game franchise

While it is entirely possible that another chapter in the franchise is published in the future, pending resolution of the lawsuits against EA Sports, the NCAA, and the CLC, I've developed an outline for how a college football video game could be produced, even without licensing agreements from the NCAA or the schools it governs.

The cupboard seems to be dry, but what is left is the endless possibilities of customization, from the ability to create uniforms and logos to gigantic stadiums. While the game would lack the aura of past installments when shipped, with every college football team already preloaded, this game could usher in a new era of sports video games.

When the new college football game arrives in stores, it would come as a generic football video game, similar to the original release of the series on the Super Nintendo and Sega Genesis systems. Bill Walsh's College Football introduced the collegiate game to the video game world, and without a licensing deal, the teams were known by city name and shared its colors with the school it intended to represent.

Other video game companies, such as 2K Sports, created a generic football game after EA Sports purchased the exclusive licensing rights to the NFL and NFLPA properties, but failed to create a product that could compete with the Madden franchise. With no other college football game on the market and ultimate customization options, EA Sports could potentially make such a game succeed.

Striking a deal with a former college football legend to put his name on the game, or with the Heisman Trophy Trust, whose licensing opportunities are separate from the NCAA, could bring an immediate impact to the watered-down game. Similar to Bill Walsh's influence on the early stages of the franchise, Archie Griffin's College Football or Heisman ‘15 could have the same impact.

Starting up the game, you'll only have the option of playing with teams like Columbus, Ann Arbor, South Bend, Eugene, Tuscaloosa, or Tallahassee in a basic bowl-shaped stadium. Fans will know which school these teams are truly meant to represent, especially when the Columbus squad is red and gray and the team in Ann Arbor is blue and yellow, and EA Sports would not be subjected to legal action if they were to avoid using any logos or likeness beyond those colors.

It should be noted that gamers without access to the internet would be unhappy with the game, although it would be sold at a fairly discounted price, since they will not be able to gain access to the online customization features that this game will rely upon. From there, EA Sports would have to drastically improve upon TeamBuilder, the online process that allows you to create a high school, college, or fictional team for use in the game.

When you access the TeamBuilder screen, the first step is to input basic team information, including the school name, nickname, colors, location, head coach's name, stadium name, and whether the program will play at the FBS or FCS level. My only improvement would be the option to create Division II and Division III schools, as well. 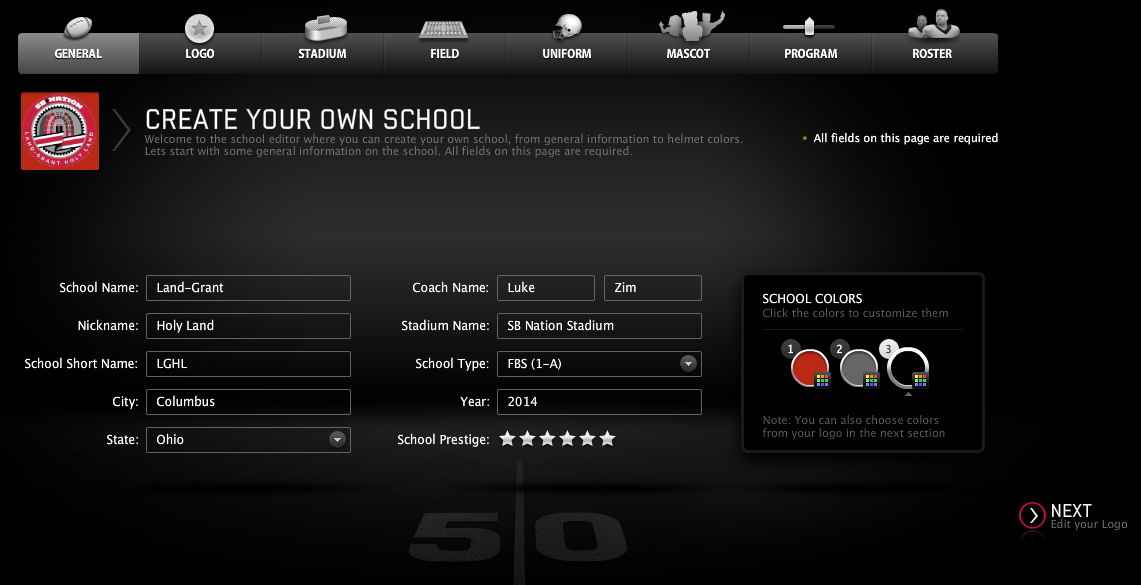 The next step, which will be critical to the ultimate customization of the game, is the ability to create or upload your own logo. The latter can use any image, and although EA Sports asks users to avoid using copyrighted or trademarked logos, the company cannot be legally reprimanded for user creations. For example, fictional teams and logos from movies and television, such as Varsity Blues, Friday Night Lights, and The Longest Yard, have all been uploaded to the servers.

Following the logos, users are able to edit their team's stadium. Sadly, your only options are to use an already created college stadium, bowl venue, or a generic high school field as your home field. From there, you're able to edit the field to use your school's colors and logos, but it may look strange if your stadiums seats are one color and your team is another. With these customization options clearly lacking, a radical change would be needed for the next installment of the game. 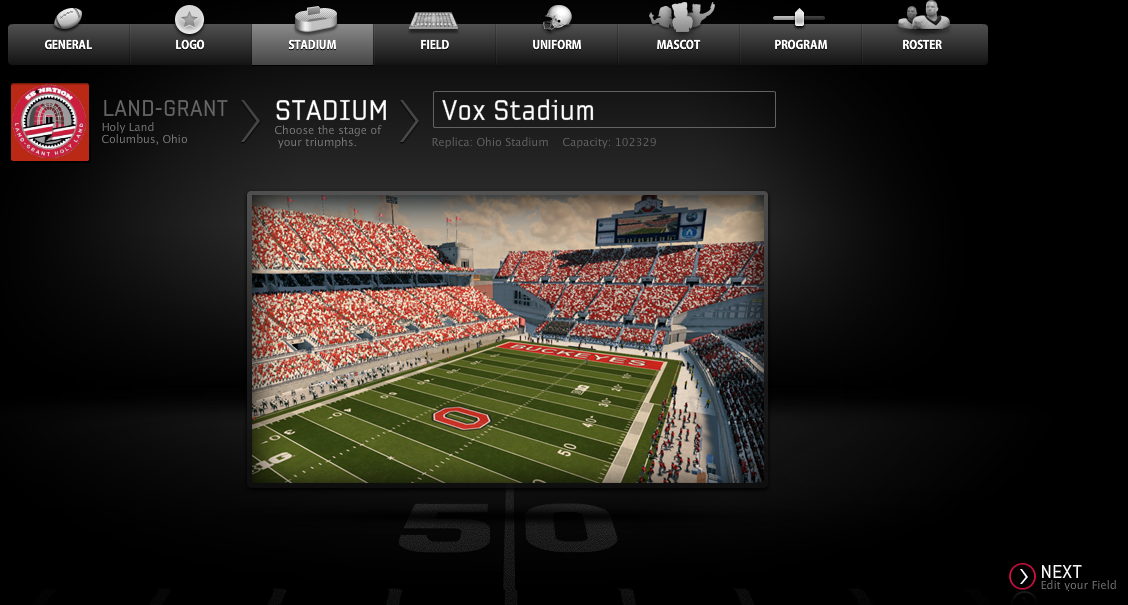 Madden dabbled in stadium construction when users moved their franchise, allowing you choose everything from how many levels of seating to how many lighting fixtures you'd like in your stadium. However, that has been replaced with 10 preloaded stadium options in the latest version of the game, Madden 25. It would be fine for the preloaded stadiums to come in the college football game, similar to the generic teams, but what I propose is the ability to create a stadium from the ground up.

Similar to the popular game MineCraft, users should have the option to build every section of the stadium, brick by brick. While some users would find this task daunting, that is the beauty of downloadable content via online servers. Quite simply, I can promise that someone would create it for you.

If you decide to have a basic stadium, one improvement can be made on the field. The current options for field customization are minimal, allowing users to choose between standard, college, and italic fonts in the endzones, and whether they'd like natural grass, turf, or blue turf. I propose options for other endzone fonts, striped endzones, and multiple colored field options. 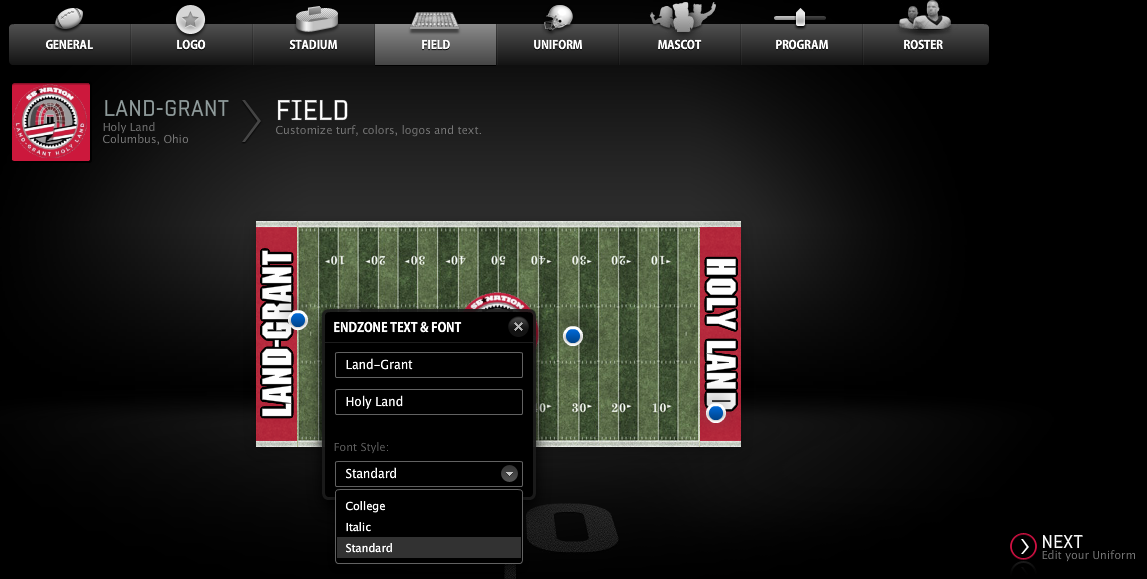 With today's college football programs seemingly wearing a different uniform every week, EA Sports' focus on uniform customization should have been a priority years ago. Instead, users have had to choose between two helmet, four jersey (two home, two away), and two pants options from TeamBuilder's inception.

To keep up with reality, this chapter of the game should be unlimited. Since the content is downloadable and does not have to fit onto a disk, if users want ten helmets and ten uniforms, they should have that option. In addition, the player should have the option of what finish they'd like on their helmet, whether it be gloss, matte, metallic flake, airbrushed, and so on. 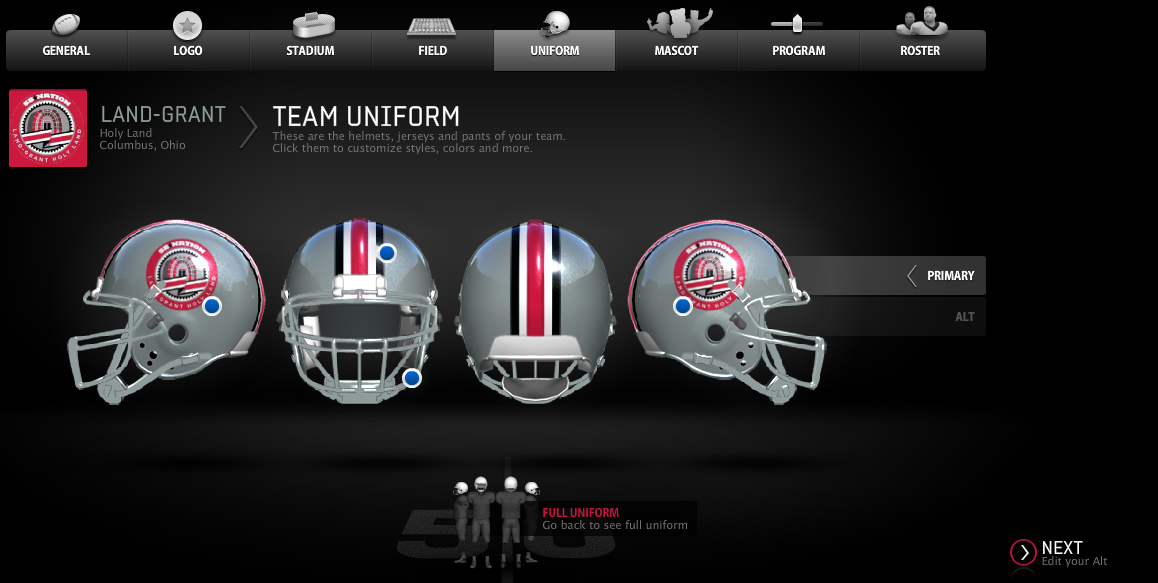 It may seem like I'm asking a lot, but EA Sports has been holding out for far too long. The series hasn't had a credible competitor for years, and many have complained that the company has been essentially publishing the same game. Focusing energy on the customization factor would go far to set the game apart from previous versions, and give fans a compelling reason to buy the game.

The uniforms must be subjected to an overhaul, as well, as the current options are dated. If EA Sports were to enter into a new licensing deal with apparel companies like Nike, Adidas, and Under Armour, the game could use updated, manufacturer-specific templates. EA Sports' FIFA franchise already uses similar customization options, where users choose a manufacturer, the template of the uniform, and logo placement. If the college football franchise were to adopt this format, users could create every uniform imaginable. 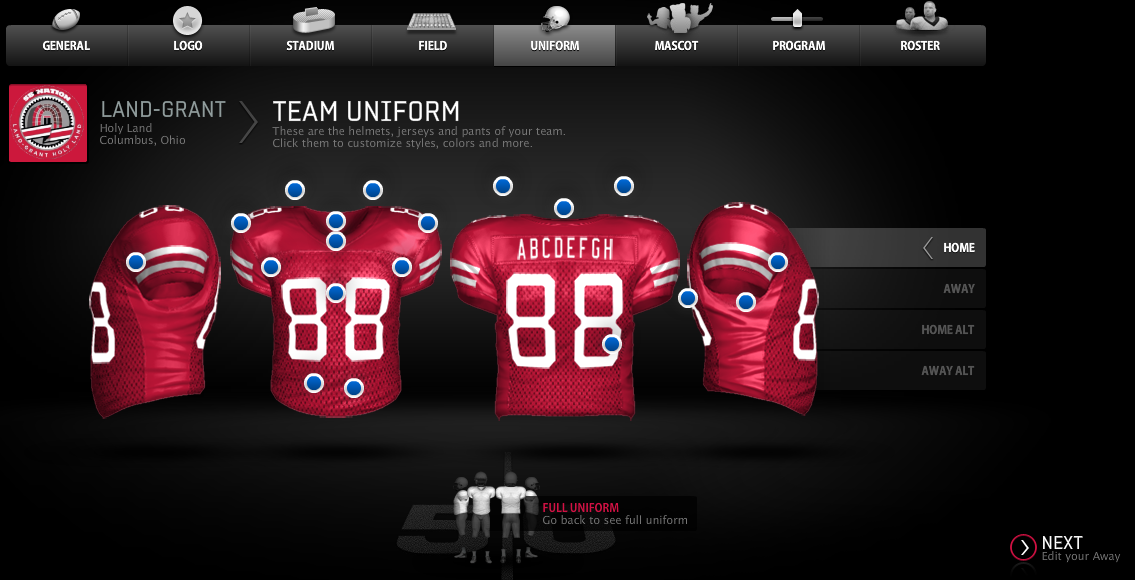 Included in the uniform customization improvements are more numerical font options and the ability to change sock colors, as black and white are the only current options.

The final step in TeamBuilder is to set the roster for your created team, where users are prompted to choose whether their team is a juggernaut or a cupcake. If you so choose, however, players can edit the roster, player-by-player, to replicate current, past, or fictional teams. As already noted, users often create teams based on movies or television shows, but have also created some of the best college football teams of all-time. In fact, the TeamBuilder's home screen allows users to download team such as the 2001 national champion Miami Hurricanes or Vince Young's Texas Longhorns. 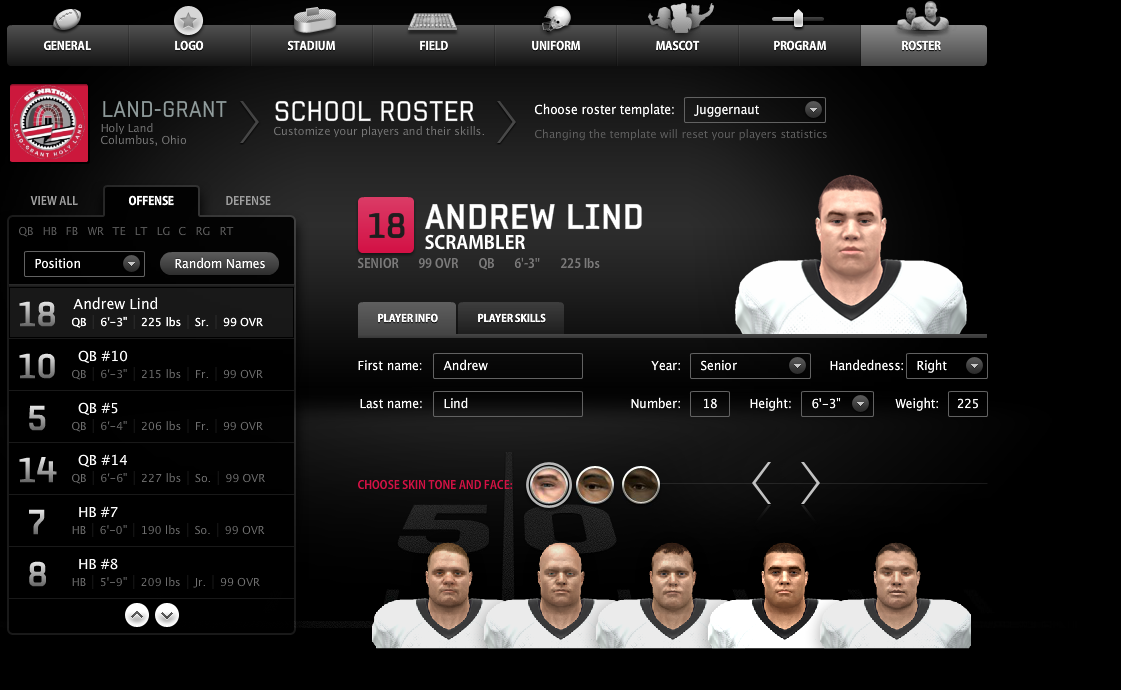 I will say that setting every team's roster to match its real-life counterpart is a long process, but again, that's the beauty of downloadable content via online servers. Someone has already created the teams you want to play with. A quick search of TeamBuilder shows that you can download any team national champion Florida State to my small town high school.

Once you've downloaded every team you'd like in your endless college football landscape, the ability to create conferences should be an option. Despite the fact that some conferences pulled out of their licensing agreement with EA Sports, users should be able to recreate the Big Ten or SEC in the same light that they would create the Ohio State Buckeyes, by uploading an image to TeamBuilder.

Finally, what would a college football season be without the bowl games, the upcoming playoff, and postseason awards? As already noted for the Heisman Trophy Trust, the bowl games and other postseason awards are individually licensed and can be purchased by EA Sports. In addition, since the playoff, and most bowl games, are owned by ESPN, EA Sports would not have to enter into another contract with the Worldwide Leader. In 2005, the two companies signed a 15-year deal for ESPN to be integrated into the video games.

If EA Sports is to save its college football video game franchise, it must give the fans the ability to completely customize the game. It's not possible to predict whether the game would be profitable, especially at the discounted price tag that a generic game would have to sell for. Personally, I would have no qualms about buying such a game, as I use the TeamBuilder and the downloadable content EA Sports provides already, and it's surely better than no game at all. Hopefully, other consumers would agree.

Next Up In College Football