What would a World Cup style college football playoff look like?

The World Cup format is fun and exciting. What would it look like if we did one for college football?

I admit: I'm not a huge soccer fan most of the time. Like millions of other Americans though, I hop on the bandwagon once every four year, especially since I'm a Brazilian citizen, and have precious few other opportunities to share any kind of connection to the homeland of my mother. For the next few weeks, I'll yell and cheer for the guys in yellow, perhaps to the chagrin of my coworkers.

The World Cup playoff format, pods and all, is different from just about everything we typically use here in the states, but that doesn't mean it isn't awesome. Our friends are Reddit recently drew up what the NCAA basketball tournament might have looked like had they used the system, and it's pretty cool, even though, geez, would Ohio State have even advanced out of that group? Probably not.

Seeing that, of course, got me thinking. Last year, we brainstormed about what a bunch of different playoff brackets might look like, from four teams to 32. What would a college football playoff look like if we used World Cup style pods?

As it turns out, the good folks at Team Speed Kills took a whack at this idea a few years ago. But in the true spirit of the World Cup, perhaps a more unwieldy, more expansive bracket might be a little more...fun, right? Let's take a crack at what that might look like.

First, a huge caveat. We're looking at building a 32 team playoff that will involve multiple games. This is not practical. This is not going to happen. If you look at this scenario and start wondering about who is going to host what game, or how this fits in with the calendar of the regular college football season, you're missing the point. This is merely a thought exercise. Let's take the 2013 results, pretend this is happening over the summer, and we're not constrained by pesky things like logistics or travel time.

One of the cool things about the World Cup is that technically, virtually any country on Earth could theoretically be a part of it. Even places that Carmen Sandiego might suspect aren't actually real, like Moldova, or the Faroe Islands, participate in qualifying. To capture that spirit, let's throw the doors of the College Football World Cup open to comers outside of the FBS ranks. North Dakota State, Eastern Washington and Eastern Illinois all beat bowl teams from last season. Let's make that their qualifying win. Congrats! Against all odds, you made the completely pretend College Football World Cup.

It's probably fair to give an extra at large bid to teams that won a divisional championship as well. So Duke (ACC-Coastal), Ohio State (Big Ten-Whatever), Arizona State (Pac-12-South) and Missouri (SEC-East) all get bids, along with Marshall (CUSA), Utah State (MWC) and Northern Illinois (MAC). That gives us 20 spots total. We need 12 more.

The real World Cup incorporates some questionable ranking mechanisms, so let's go with that. When I think of questionable ranking tools, I think of the BCS, so let's go down the 2013 list and grab the top 12 teams that didn't otherwise get a bid. That gives us Alabama, South Carolina, Oregon, Oklahoma, Clemson, Oklahoma State, LSU, UCLA, Louisville, Wisconsin, Texas A&M and Georgia. USC is the first team out, and quite frankly, y'all have no reason to complain, Trojan fans.

So that's our 32 teams. Next, we need to seed them into groups. Again, let's go ahead and use the BCS rankings here.

Now, the tricky part: the groups. Like the World Cup, I slotted the Pot 1 groups in order (FSU to Group A, Auburn to Group B, etc), and then used a random number generator to determine which teams in the other three pots would join them. I admit, I cheated a little to make sure that the Pot 1 and Pot 2 teams weren't from the same conference. This is what I came up with:

Sure, cry bias all you want, but it looks like Ohio State caught the lucky group, while Group D and Group A look like absolute killers, and North Dakota State will be hard pressed to work any magic in that tough group.

Now, it's time to figure out who actually advances. I fired up the simulator at WhatIfSports to get scores and everything. Let's give three points to the winner, and oh, a point if a team manages to lose in overtime. In the case of a tie in the standings, the advantage goes to who has the best point differential.  Also, an important disclaimer: WhatIfSports doesn't include FCS teams, so for simulation purposes, I swapped the FCS with their closest approximation using Sagarin rankings. It's horribly crude and unfair, but hey, you didn't think any of these three teams would actually advance, right?

Florida State wins the group, LSU advances. I was a little surprised how much Florida State dump trucked everybody, and how close Eastern Washington played  LSU and UCLA. Of course, I was plugging UTSA in the computer instead of EWU (their Sagarin ratings were almost identical).

Well, you had a good run FCS teams, but despite some close games, nobody was able to pull out a win. Arizona State beat Wisconsin without the help of #PAC12REFS. Alabama wins the group, ASU advances.

What a wild group. I certainly didn't expect a Clemson/Rice game to factor critically into determining who comes out of it. Michigan State wins the group thanks to point differential, and Clemson advances.

Ok, finally some real madness. Fresno State wins the group, Utah State advances, and we all wonder just what the hell happened to Oklahoma. That team beat Bama, didn't they?

So, I assume this is in the land of make-believe where nobody on Georgia gets hurt, as they blow up the scoreboard to win the group. Also, in a world where Baylor thought they might need to advance on point differential, I can't be surprised that they nearly dropped 80 points on somebody. Baylor advances.

Ohio State barely wins the group thanks to point differential (+64 compared to +19), while Louisville advances.

Oklahoma State wins the group, Bowling Green advances, because of course they do.

Now that group play is over, our 16 team bracket would look like this, after we follow the World Cup seeding format (1A vs 2B, etc) 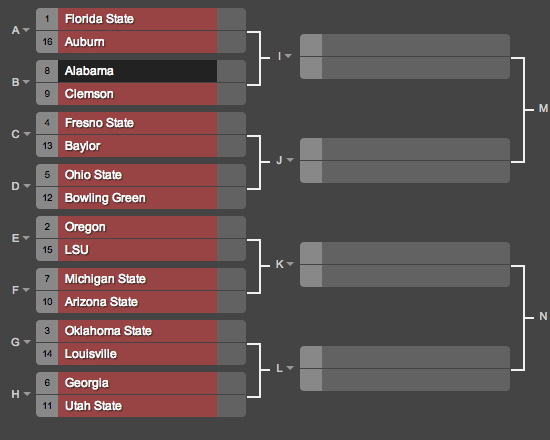 So, we get a rematch of the championship game in the first round knockout stage, amazing games between Alabama/Clemson and Oregon/LSU, a few sleeper games and...Ohio State/Bowling Green. Again. Not rigging the tournament. Promise.

Aww, the march of the underdog is over. 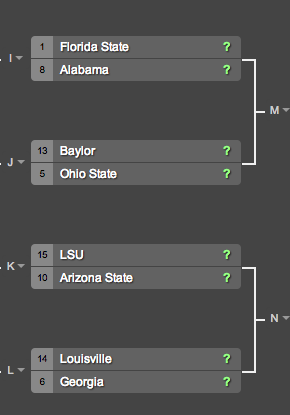 Okay, so maybe, in the spirit of the World Cup, this is a tiny bit rigged. Actually, I swear I'm not refreshing the page until Ohio State wins. Also, the World Cup means that we're either going to have Arizona State or Georgia in the championship game, just like we all predicted. 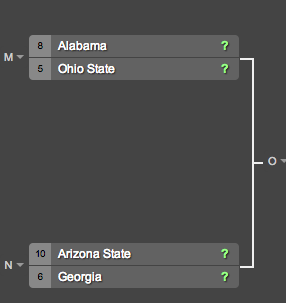 Dammit, I spent the last two hours running random number generators, computer simulations, and this is the result I get? An All-SEC College Football World Cup final?

Wait, Georgia, a team beset by a biblical scale of injuries and bad luck, upset Alabama to win the World Cup?

Here is your final bracket:

So, obviously, that's unrealistic and all, but what do you think? What changes would you make in the formula? How could we rig this to make sure Ohio State wins more often? Does this simulation mean that somebody crazy like Cameroon is going to win the actual World Cup?