With Carlton Bragg and OBC knocked out of bracket play on Saturday night, Sunday at Adidas All In went a little differently than expected.

As Shining Star pulled off the upset of the weekend taking down Carlton Bragg and OBC on Saturday night, day three at the Adidas All In Classic wouldn't have nearly as many surprises. With a Cleveland-based TNBA East squad taking down King James Runnin' Rebels for the 17u title, OBC would redeem itself behind 32 points from Jarron Cumberland in the 16u title game. Let's take a look at some of the day's top performers.

This is becoming a little redundant. Another championship Sunday, and another major performance from one of the state's best scorers. Facing a tough Michigan Mustangs team in the 16u championship game, Cumberland's 32 points would be a game-high in a 77-55 victory for OBC, their fourth tournament championship of thE AAU season. Days after receiving his first high-major offer from Purdue, Cumberland should expect to see his stock to continue to grow, as more and more people are taking notice of the 6-foot-2 guard's elite scoring ability.

With Sunday being my first chance to view the massive 6-foot-10 Davis, I came away thoroughly impressed with the Michigan native. Arguably the top center prospect in the event, Davis would go for an all-important 20 points and 14 rebounds vs. Nova Village in the semifinals. Constantly active on the glass, Davis would create a great deal of second and third-chance opportunities for Michigan in the close win vs. Nova. Receiving an offer from Kent State concluding Sunday's performance, Davis is a name to keep on your radar for the next few years to come.

Despite what some considered an upset loss to Nova Village on Sunday morning, Towns had his best performance of the weekend, and possibly the year. Scoring a game-high 25 points, Towns was an impossible matchup for the defense, finding success from the three-point line and everywhere in between. Playing in front of Illinois head coach John Groce, Xavier head coach Chris Mack and scores of mid and high-major assistants, Towns left a lasting impression despite VCC's earlier-than-expected departure. In addition to his high-level scoring, Towns would add six rebounds, three blocks and three steals, showing activity in all facets of the game.Check out highlights of Towns' 25-point game below, courtesy of 3rd Coast Hoops.

One of the key members of a Cleveland East Tech squad that made a historic run to the state final four this past season, Carmon is no stranger to the big stage. Squaring off with King James Runnin' Rebels for the 17u championship, Carmon would be the difference in the early moments of the second half to help his TNBA East squad secure a title. Going for a game-high 20 points, Carmon would score 11 points in the first five minutes of the second half, helping TNBA balloon what was once an eight-point halftime lead. Carmon was too much to handle off the dribble for King James' defenders, constantly finding his way into the lane for tough finishes. The 6-foot-2 guard would cap off his big performance throwing an alley-oop off the backboard to himself to all but seal TNBA's championship win late in the game.

Simply put, Wright is a 230-pound load of a shooting guard that never shies away from contact. Squaring off with VCC Ohio Warriors in Sunday's opening game, Wright would consistently bully his way into the lane en route to a team-high 17 points, and more importantly, a victory. Months after wrapping up a successful sophomore season at Walnut Ridge, Wright has carried his impressive play over to the AAU season, and coaches have taken notice. One of several key members on a deep Nova Village squad, Wright should expect to see a rise in recruiting activity as he and Johnstown forward Jason Carter are two of Central Ohio's more promising prospects in the 2016 class.

Equally as important as Carmon in TNBA's title win, Cleveland's Lillard did a little bit of everything for his team on Sunday. Scoring 18 points, Lillard would add an impressive six rebounds and eight assists to control the tempo from the jump for TNBA. One of the more versatile scorers in the event, Lillard sliced and diced his way into the lane on Sunday, finishing a high percentage of his attempts around the rim, while also finding teammates for open looks. With offers from Arkansas State, Cleveland State, Kent State, Manhattan and St. Peter's, Lillard continues to prove himself as one of Ohio's top shooting guards in the 2015 class.

Constantly playing with a calm and cool demeanor, Singleton was a man on a mission in King James Runnin' Rebels semifinal win over Who Got Game. Scoring a game-high 17 points, Singleton would also rip down a game-high 11 rebounds to help erase a four-point halftime deficit in a 56-50 win for KJRR. At 6-foot-5, Singleton has quality size for the small forward position, and has increased his strength around the basket to maximize a quick first step that helps him get into the lane. As multiple coaches noted Singleton's progression over the last few months, keep an eye on the Defiance product this upcoming season.

Two days after receiving an offer from Div. II Ashland University on Friday, Dennis would put together another solid performance for his Who Got Game squad in the loss vs. KJRR. Scoring a team-high 16 points, Dennis showed off his perimeter shooting, knocking down four shots from behind-the-arc as his team fell just short late in the game. Leading Harvest Prep to the state final four this past season, look for Dennis & Co. to achieve similar success in 2014-15, as the Warriors come back as a deeper and more experience unit.

Alongside Singleton, Bolte has been huge down the stretch for the King James Runnin' Rebels, showing off his sharp-shooting and underrated athleticism. Going for 13 points in KJRR's semifinal win vs. Who Got Game, Bolte knocked down several key threes in the second half to secure a big win. Under the radar at Chillicothe High School, Bolte is a name to keep an eye on, after the guard has continued to play at a high level in the open evaluating period. As the main scoring option on his high school team, look for Bolte to put up major numbers as a senior in 2014-15. 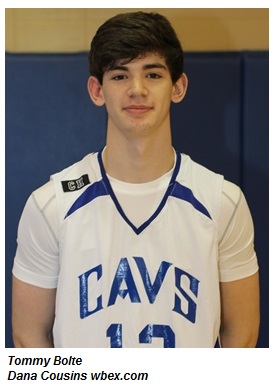