We take a deep dive into what makes Keenan Reynolds so successful in the flexbone offense.

Share All sharing options for: Navy's triple option and why Keenan Reynolds is so successful in it

Quarterbacking the flexbone offense is not an easy thing to do and former Navy head coach and current Georgia Tech head coach Paul Johnson came up with a list of qualities that determine whether or not a prospect can lead an option offense.

Let's take a look at what makes current Navy QB Keenan Reynolds the perfect signal-caller for the Mids' flexbone offense:

1. Does the prospect have the willingness to get off the ground after a "big hit", call the same play and run it aggressively?

When Ohio State linebacker Joshua Perry talked to the media, he had this to say about Reynolds, "He's their guy," Perry said. "He's a guy who isn't necessarily a burner, speed-wise, but he has really good vision and he knows where the seams are. Once he puts his foot on the ground and he gets vertical, that's what he likes to do. We have to take really good angles. We can't overrun anything."

Reynolds mental and physical toughness was shown last season in Navy's 41-35 victory over Indiana. Navy faced a 4th-and-1 at the Indiana 49 yard line with roughly two minutes remaining in the game. Navy coach Ken Niumatalolo had a decision to make: would he go for it with the chance to ice the game, or punt the ball and give his defense a chance to save the game? He decided to put the ball in Reynold's hands and it paid off -- but barely.

They called their bread-and-butter play: Reynolds faked the hand-off to the "B" back (fullback) and had nowhere to go with the Indiana defense playing it perfectly. Reynolds was hit in the backfield but lunged forward for the down to clinch the win for the Midshipmen:

Also, Reynolds' toughness really shows as games wear on, as he scored 22 out of his 31 rushing touchdowns in the second half of games. He also rushed for 20+ yards 12 times in the second half compared to only three times in first halves. It is safe to say that Reynolds has the athletic ability to convert first downs and make big plays when they matter the most.

3. Does the prospect have the willingness to execute option plays, not just tolerate running the option?

When it comes to execution, his statistics speak for themselves. But here's visual proof:

So how does the triple option work?

Navy runs the 'flexbone' offense, which is a run-first attack that has produced some of the best single season rushing yardage marks in NCAA history. The staple of the flexbone is the inside veer, a triple option.

As shown above, the "B" back is lined up behind the quarterback, while the two "A" backs are the players on the wings.

The diagram below shows the inside veer (triple option) versus a 4-3 defense:

The quarterback needs to "count" defenders in the option game, as to which defenders to read to make the correct decision in the triple option.

#1 defender is the first defensive lineman on or outside the playside tackle (circle).

#2 defender is the first defender stacked or outside the #1 defender (square). 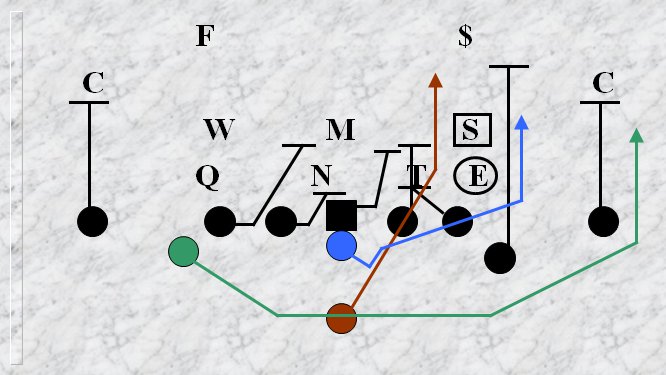 The Navy playbook includes their rules when running the triple option:

The triple option begins with the back-side "A" back going in tail motion. The quarterback can either hand the ball off on a dive up the middle to the "B" back, take it around end himself based on the defensive end, or begin to take it and pitch it to the motioning "A" back.

This is where having a smart and talented quarterback like Reynolds helps tremendously because of how easily he can read a defense. He helps out the offensive line by reading the correct defenders in a split-second and taking them out of the play, which allows the offensive line and any other blocker to double-team other defenders. That is what makes a Reynolds' led offense precisely so dangerous.