The fourth game of the season is in the rearview. You've watched the game and seen the stats, but what do the advanced numbers say about the Buckeyes?

Setting offensive records feels pretty good. Allowing 352 passing yards and four touchdowns does not. How should we feel a shootout with Cincinnati that saw 60 first downs, 1132 total yards, and 78 total points?

Momentum and the defense

More than any other this season, the Cincinnati game was all about momentum. Below are the Buckeyes' efficiency numbers per quarter, with the Bearcats' in parentheses: 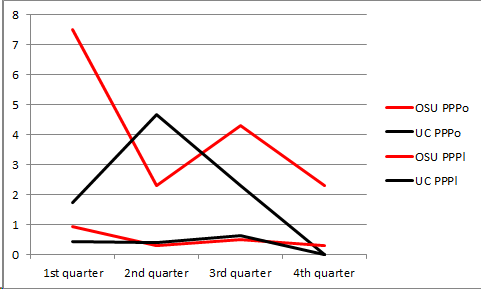 Of the Bearcats' 28 points, 21 of them came on three explosive plays. If you remove those plays, Kiel would have been 18-29 for 131 yards and the Bearcats would have gained just 201 total yards. Obviously we can't ignore three complete breakdowns in the pass defense, but it's worth noting that the Bearcats were almost completely ineffective outside of those big plays. As one of the commentators said last night, Cincinnati had explosive plays down -- it's efficiency they need to work on. The opposite was true for the Buckeyes.

It's also worth remembering that the Buckeyes came into the game as the only FBS team to not allow a single pass of more than 20 yards while Kiel had four touchdown passes of 20+ yards in just two games. Also, outside of the 78 yard touchdown, Kiel only threw for 38 yards in the entire second half.

Although the Bearcats' had a surprisingly effective 53% running back success rate themselves, all of their production came in the first half -- they didn't have a single efficient carry in the second half.

Finally, the Buckeyes forced three three-and-outs (and four other punts and a safety). There is a significant decline in win probability following an offense having two or more three-and-outs in a game.

But the offense was pretty great

So tying an NCAA record and setting a school one for first downs (45) is pretty great. So is Elliot seizing control of the starting running back spot during the bye week and going for 188 rushing and 45 receiving yards. Oh, and so was Barrett's line of 25-35 for 324 and no interceptions. This is (or should be) more or less what Urban and Herman had envisioned the post-Braxton era to look like: Elliot as your feature back, J.T. as an accurate distributor, and skill players running wild.

Breaking those performances down reveals two things: Elliot was consistent and efficient and the offensive line was much improved. Elliot's running back success rate was 76%, which would be on the high side even for Carlos Hyde. Interestingly, despite Elliot's production, he didn't have a single run for more than fourteen yards, which was the (arbitrary) cutoff for explosive running plays. Cincinnati was fairly bad at defending against the run relative to the pass entering the game (78th to 59th), so Herman's gameplan worked to perfection.

Second, the offensive line's run blocking success rate was 59%, which was above the Buckeyes' FBS-leading season average last year. This is extremely good news, as maybe the line had time to gel over the last two weeks. We shouldn't confuse the Bearcats defense for the Spartan's, but it's nonetheless good news that the Buckeyes are performing as they should against that quality of opponent.