Looking back at the last year's offense versus Virginia Tech

Bud Foster and his defense dominated the Ohio State offense in the second game of 2014. Here is what happened.

Share All sharing options for: Looking back at the last year's offense versus Virginia Tech

I looked back at Virginia Tech's tape against their week one, FCS opponent William & Mary where they deployed the Bear front with aggressive blitzing and man-to-man coverage on the perimeter. The Bear front resonates from the "46" defense, which is a 4-4 front. It gives an odd front for the opposing offensive line by covering the guards and center.

Foster typically shows a similar front combined with an aggressive style of blitzing against Paul Johnson's flexbone offense at Georgia Tech, which is somewhat similar to Urban Meyer's power rushing attack. Since 2008, Foster has been one of the few coaches in the country to figure out Johnson's offense, as the Hokies have gone 5-2 versus the Yellow Jackets. They have also kept Georgia Tech to 21 points or less in four out of the seven games. It is baffling looking back at last year's Virginia Tech preview article and talking about the Bear front then watching the offensive line look like they have never seen it before.

Here is an excerpt from last year's preview article:

As everyone knows, the run sets up the pass in Meyer's offense, especially with redshirt freshman quarterback J.T. Barrett making his second career start on Saturday. Not to mention the offensive line issues that plagued the Buckeyes versus Navy, Foster will surely have an aggressive plan; showing multiple fronts, stunts and pressures from all directions, along with a variety of coverages to confuse the young signal caller into making critical mistakes.

Foster's main focus will be to stop the run first, with seven to eight players in the box, trusting his corners on islands in man-coverage. He will force the redshirt freshman quarterback and his array of playmakers on the outside to beat his talented defensive backs one-on-one, while Barrett and the inexperienced offensive line face extreme pressure up-front.

Fast forward to the game and what most expected Foster to do, he did and it was with massive success. He played mostly a Bear front with Cover 0 or Cover 1 with aggressive style blitzing.

Here are the positives, negatives and how to beat Cover 0:

Here are the positives, negatives and how to beat Cover 1:

Here is a breakdown of the six sacks that occurred in the 4th quarter:
1. 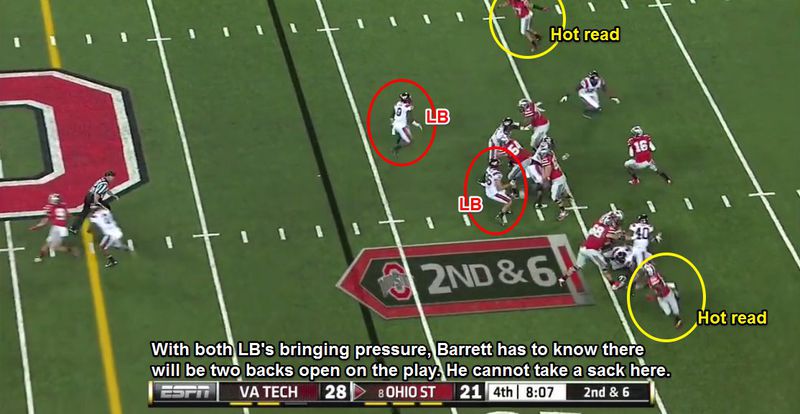 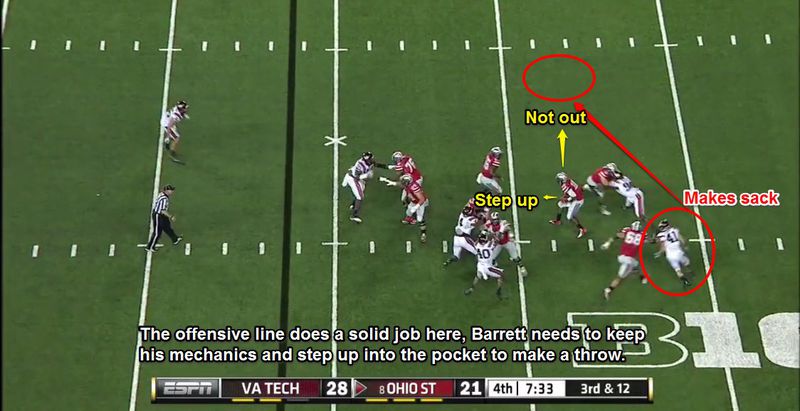 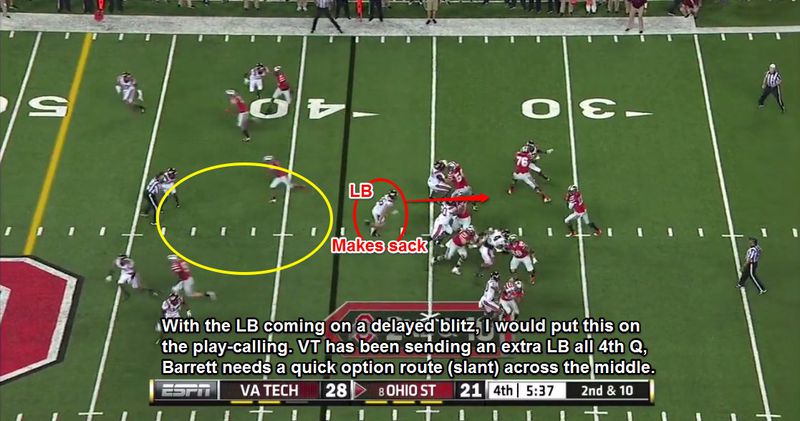 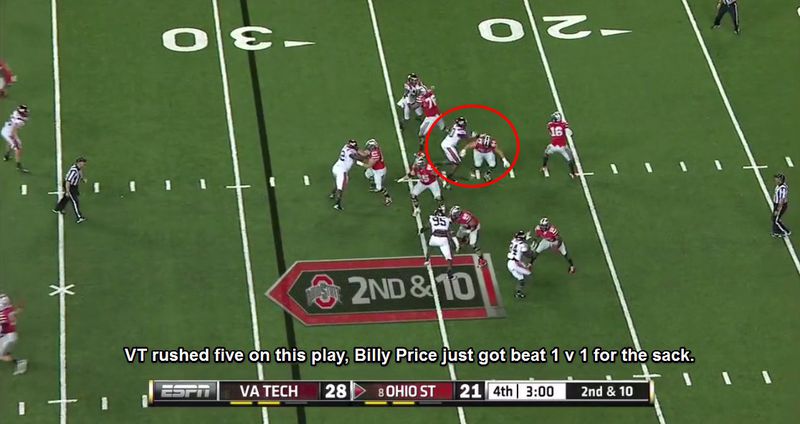 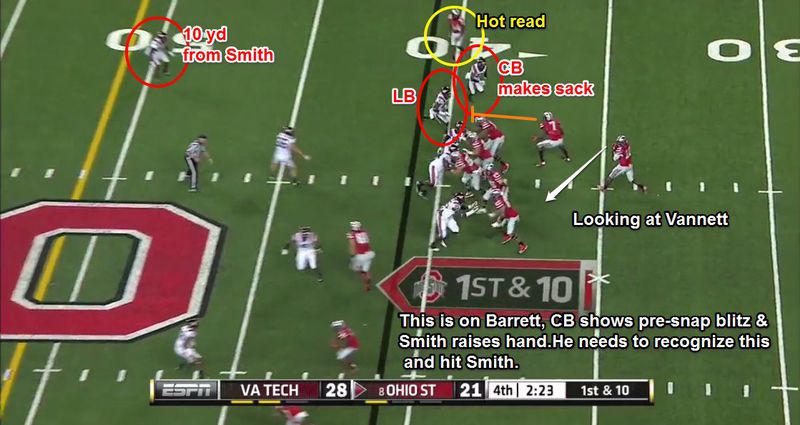 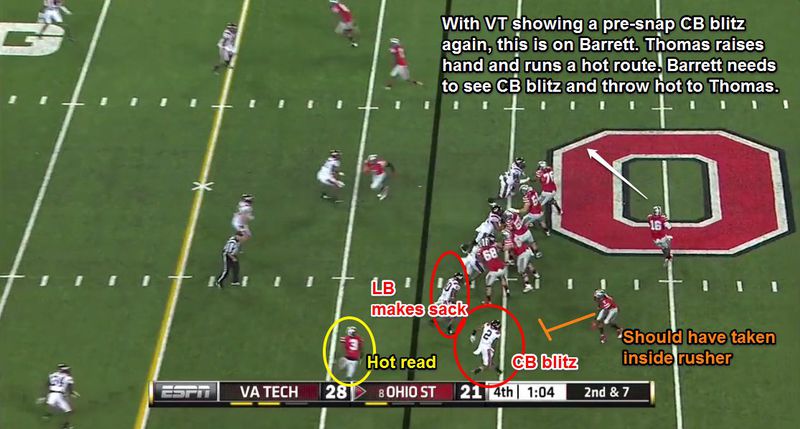 7. Barrett was not sacked on the play but the pressure got to Barrett, forcing him to miss a wide-open Dontre Wilson coming out of the backfield. Barrett needed to be composed, put air under the ball and allow Wilson to make a play. 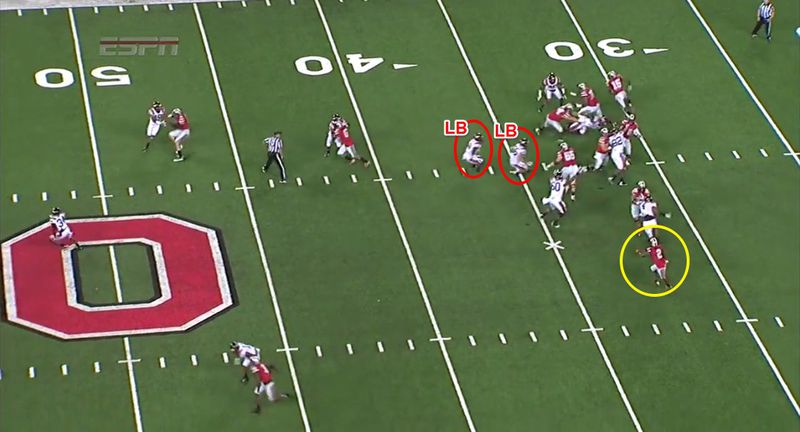 I fully expect Foster to see how the Ohio State coaching staff exploited the Bear front following their match-up. The Buckeyes faced numerous copy-cat teams who took a page out of Foster's playbook but in all instances, the Buckeye offense moved the ball with ease.

With four of the top five Ohio State wide receivers out, expect Foster to deploy man-to-man coverage on the outside and dare the inexperienced pass catchers to beat them one-on-one. Kendall Fuller is arguably a top three corner in the country and he will most likely be lined up on an island against Thomas. I would expect Cover 0 and Cover 1, with a safety shaded over Thomas in Cover 1, forcing inexperienced players such as Johnnie Dixon, Braxton Miller, Curtis Samuel and others to beat them.

It will be interesting to see which defensive front they will use, since the Buckeye offensive line did a great job against the Bear front after their first match-up. If Barrett is named starter and struggles early on versus the Hokies' exotic fronts, pressures and man-to-man coverage, it would not surprise me to see Cardale Jones, which would force Foster to play Cover 1 with a deep safety or Quarters coverage.

It should be an excellent coaching battle week one of the season, with two of the best offensive and defensive minds in all of college football, going head-to-head.